Thursday Williams, Rosdely Ciprian, & Mike Iveson Talk What the Constitution Means to Me, Running for Congress, Getting Shut Down by the Feds, & More 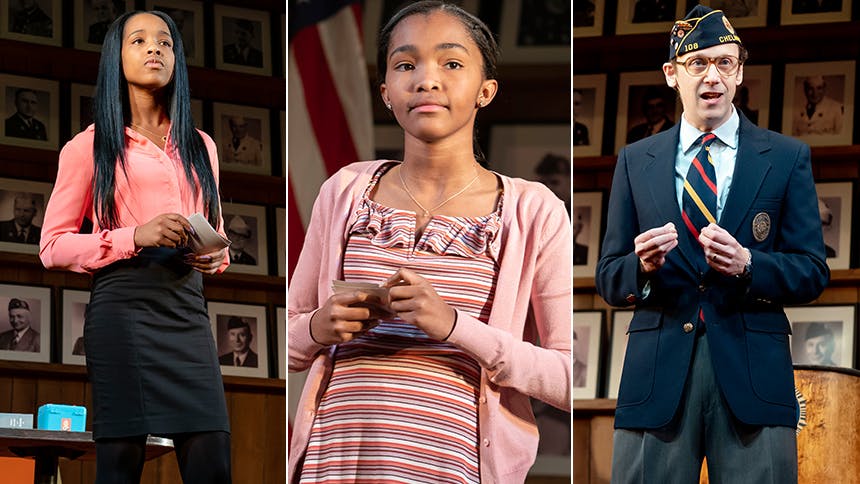 There's a must-see play on Broadway right now for any woke, politically aware American, and it's the Tony Award and Pulitzer Prize-nominated hit What the Constitution Means to Me

. Created and performed by Tony nominee and OBIE winner Heidi Schreck, the play examines the Constitution as a crucible, a quilt, and a living document used to protect certain Americans but certainly not all.

While much of the play is performed by Heidi alone, she also shares the stage with Mike Iveson (who represents a male from Heidi's past, as well as LGBTQ Americans whom the Constitution often overlooks). Later in show, Heidi debates whether the Constitution should be abolished in favor of a new inclusive document against two fierce high school debaters, Rosdely Ciprian and Thursday Williams (both of whom alternate the role and represent the next generation of women, as well as African Americans for whom the Constitution historically fails). Scroll on as BroadwayBox gets to know Thursday, Rosdely, and Mike a bit better and learn what this show and experience means to them.

1. How did you become involved in the show? How did the opportunity appear on your radar?
I became involved in the show when I auditioned August of 2018. Ms. Crea, my theater teacher at that time, gave me the opportunity. She read what they were looking for and thought I was the perfect person for the part. I didn’t meet Heidi until my call back audition. When I first met her, she was so funny, sweet, and down to earth. It was easier to do the audition in front of her.

2. Audience members leave this show feeling changed, aware, and fired up. How has being a part of this show changed you?
Being a part of this show made me change my career. Before the show, I wanted to be a lawyer that represented young people who have been trapped in the criminal justice system. After working on the show, I know I want to run for Congress. This show shines a light on many issues troubling society. But one thing this play made me realize is there are not enough women holding political office to make the changes this country needs.

3. What’s your favorite small moment you share onstage with Heidi?
My favorite small moment that I share with Heidi onstage is the short scene at the end where we ask each other a few questions from the audience from the night before. I love this moment because I always enjoy hearing Heidi’s answers to the questions. My favorite moment was when I asked her what’s a dream she had that she wish she never woke up from and she answered the dream when she is flying.

5. What’s your directive when debating Heidi each night? How much does audience interaction shape that scene for you? And how do you respond on the nights you lose the debate?
Each night before I join Heidi onstage for the debate, I tell myself, “You’re going to win this one.” Audience interaction plays a major role in how I perform. The louder they are the harder I go and the more I try to win. On nights when I lose the debate, I always try to tell myself that people came in with their minds made up and they didn’t make their decisions based on the debate. When I lose it also motivates me to try harder the next time.

1. How did you become involved in the show? How the opportunity appeared on your radar and what were you early meetings with Heidi like?
I became involved with the show originally through debate, because my debate coach had recommended me to Heidi and Oliver [Butler, the director]. I believe he saw a cast listing of some sort, and the next thing you know I am in my grandma’s house with my mother reading the audition email through the phone. It has taken off from there.

My early meetings with Heidi, while we were doing the show at Clubbed Thumb, were quite interesting. At rehearsals (two years ago), we would just sit and discuss America’s fundamental issues, or just things we noticed, and we still did that during rehearsals, and it wasn’t just the actors—the whole team would participate.

2. What’s your directive when debating Heidi each night? How much does audience interaction shape that scene for you? And how do you respond on the nights you lose the debate?
My directive with the debate with Heidi is the fact that there’s always a spark with the audience and an invisible connection with Heidi and the piece. The interaction with the audience doesn’t affect the tone of the debate but rather the outcome, since we choose a judge at the end. Personally, I’m very competitive so I’m always trying to get the audience on my side and trying to get them distracted from Heidi’s rapid-fire arguments.

3. Audience members leave this show feeling changed, aware, and fired up. How has being a part of this show changed you?
Being a part of this show has changed because I have been bitten by the theatre bug/acting bug! I feel deeply passionate towards acting and TV shows. Heidi’s play is revolutionary to me because it is picking apart our controversial document that is the Constitution. I’m surprised we didn’t get shut down by the F.B.I. I also feel more aware about real issues in our society.

4. What’s your favorite small moment you share onstage with Heidi?
My favorite small moments with Heidi during the show are the little pockets of being human in the show. The show is 100% human but just the little things, like when we say something unexpected and we share a laugh or when I forget a minor cue. Those things are my favorite because they remind me of the fact that I’m a person who makes mistakes and that’s ok.

5. Tell us about the America you’d love to see 10 years from now.
The America I would like to see in 10 years has a series of female leaders in all industries. Fixing the over-using of meat and over-fishing. Hopefully America will be greener, and the ice caps would stop melting. The lack of economic opportunity would be improved, and employment should increase. Lack of education and government corruption would be addressed. There would be an increase in self-esteem and a decrease in suicide rates, and so many more.

1. How did you become involved in the show? How the opportunity appeared on your radar and what were you early meetings with Heidi like?
I got involved to replace the incredible Danny Wolohan, who is currently gracing the To Kill A Mockingbird stage ACROSS THE STREET from us. Danny got the call to play Boo Radley, and Heidi asked me to step in. And now Danny can peep into our green room from the fire escape outside the Mockingbird dressing rooms. Crazy!

2. There are biographical elements to your performance where you share about yourself. What was shaping that scene like? How did you land on what to share and how it would fit in with the larger piece?
The biographical section of the show was intense to come up with—there were plenty of embarrassing stories I hadn't really told anyone before—but the most eye-opening part was figuring out how to perform those anecdotes, and to grapple with audience responses to them in real time. That's been an amazing gift.

3. How has being a part of this show changed you?
The show has made me a lot more aware that so often policy—Supreme Court decisions, Constitutional amendments, etc. —actually dictate conditions on the ground for many Americans, not the other way around, and how we all have to embrace this fact if we want to agitate for change.

4. What’s your favorite small moment you share onstage with Heidi?
It changes all the time, but currently I am so hyped about the moments when we are sharing a glance during either of the Supreme Court audio sections—mostly because they are so wide open to interpretation.

Don't miss the incredible trio in 'What the Constitution Means to Me' at Broadway's Helen Hayes Theatre through August 24.