Introduce Yourself(ie): 10 Questions with The Winning Side Star Sullivan Jones 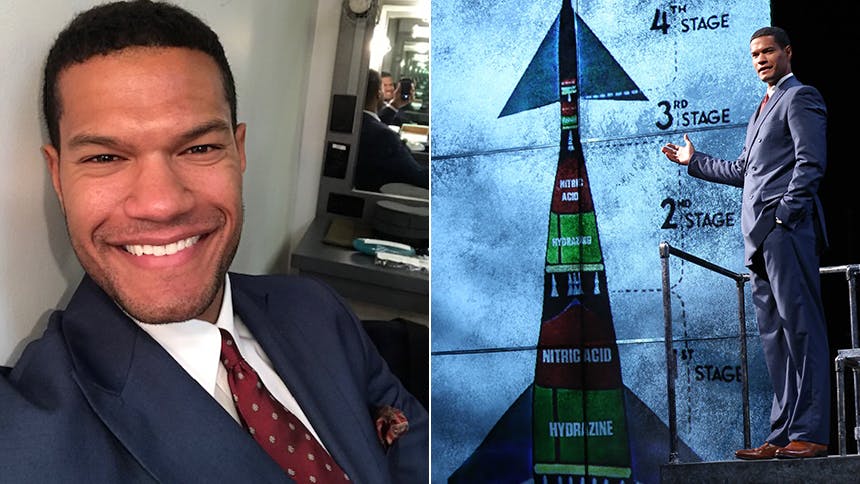 Sullivan Jones gives a breakout debut performance as Wernher von Braun (the face and voice of space exploration on television during the 1950s and '60s who was also Chief Rocket Engineer for the Third Reich) in Epic Theatre Ensemble's world premiere of The Winning Side. The new off-Broadway play by James Wallert tells the true story of von Braun and the hidden history behind America’s 1969 Apollo 11 moon landing.


BroadwayBox caught up with Sullivan to discuss the amazing opportunity of The Winning Side, his memorable and humbling audition for TV's Rocky Horror, and his Moroccan adventures for Hulu's The Looming Tower.

1. What spoke to you about this piece that you wanted to be part of it?
The lineup of challenges that this role presents is unlike anything I’ve encountered as an actor: I have to speak French, speak English with a German accent, play piano, make an appearance in every scene, and age more than a decade throughout the course of the play. It’s the kind of role that demands the use of every tool in your toolbox. Those kind of roles don’t come around all that often, so when they do, you jump.

2. What’s the most interesting thing you learned in your research for this role?
I didn’t know who Wernher Von Braun was before I got involved with this play, so learning about him was revelatory. This guy got recruited to build rockets for Nazi Germany during World War II, survives the war and surrenders to the Americans, then relocates to the Huntsville, Alabama—where he ends up spearheading the US space program, which ultimately lands the first man on the moon. It’s a wild story and what makes it all the more intriguing are the ethical and moral binds that it lays bare.

4. Who are the artists that have inspired and influenced you the most as a performer?
Nina Simone for her vulnerability and fearlessness. Wynton Marsalis for his depth and craftsmanship. James Baldwin for his poetry and precision. Muhammad Ali for his grit and playfulness. And so many others. It’s always helped me to think about acting through artistic contexts that aren’t immediately related to acting. Most people who’ve mastered a trade have qualities and ways of being that perfectly apply to the work of an actor.

5. What’s your favorite set memory from Hulu’s The Looming Tower?
Spending a month shooting in Morocco was tops for me. Learning about a culture and communities (which were previously unknown to me), traveling all throughout the country (which is stunning), and working alongside some wonderful people made Morocco one of the highlights of shooting the series. Oh...and also seeing Jeff Daniels ride a camel on the beach on his day-off was pretty memorable.

6. You’ve done a few book narrations. What’s something most people don’t know about how books are recorded?
Recording an audio book is tedious as…fill in the blank! They lock you in a little sound booth for about seven hours a day, days on end, until you finish reading the book. They don’t feed you, they don’t give you water, they don’t let you bathe (okay, none of that is true!)

But seriously, recording an audio-book is a thorough test of endurance and concentration. There’s a great story that a sound engineer once told me about a well-known actor, who shall remain nameless. The actor shows up to record an audio book (which was something he’d never before,) and a couple hours into the first recording session he asks the engineer if he can step outside for a smoke break. The engineer says “of course,” the actor heads out for a smoke and…never comes back! He just left without finishing the job. Ghosted. Recording an audiobook is not for the weak of will, and, because I don’t have the clout to walk out on a job and not have it torpedo my career, it’s offered helpful lessons on how to stay dialed-in even when I'm exhausted and feel like there’s nothing left in the tank.

7. Tell us a memorable audition story.
Back when I was living in Los Angeles I went in to read for FOX’s TV remake of Rocky Horror Picture Show. Before going in, I mentioned to my agent that I didn’t think I was a good enough singer to be a serious contender for the role, and my agent responded with some version of ,“That’s fine, you’re right for the part otherwise so just go in and do you best.” I show up for the audition, and as I’m sitting outside of the room, I’m hearing the handful of guys ahead of me in the audition room just wailing; absolutely bringing the house down. After sitting through a few auditions, I slink over to the casting assistant and confide that I feel far too out of my depth to be there and that I'm going to respectfully bow out. She says, “Well, you’re up next, so why don’t you just go in and tell the casting director what you just told me.” Gulp. Door opens, my name is called, I stumble in, introduce myself and hurtle through my story, “Thanks so much for calling me in, I just…I just wanted to let you know that I’m actually going to pass on this one because I don’t want to waste your time. I heard everyone ahead of me singing and I just…I just don’t have those vocal chops, and I don’t want to waste your time...” Gulp. Almost immediately, the casting director’s eyes light up and he begins showering me with praise and gratitude, “Thank you so much for your honesty, I can’t tell you how much I appreciate you saying that. What’s your name again? Where are you from?” And so it went. I ended up chatting with the casting director and producers for a while before they wrote down my name and said they’d be bringing me back in for their next few projects. Morale of the story: more often than not bringing humility into the room will get you farther than bringing ego.

8. You played Orlando in a film adaptation of As You Like It. What’s your ultimate dream Shakespeare role?
This is tough because I’m not a massive Bard buff so my knowledge is relatively limited. Othello would be the low-hanging-fruit answer, for obvious reasons. The more obscure answer might be Berowne from Love’s Labour’s Lost. It’s a lesser produced play and I’ve always really liked Berowne’s “And, I, forsooth in love” speech.

9. What’s a movie you love so much you know every single word?
The Sandlot, There Will Be Blood, and Eddie Murphy’s standup special, Delirious.

10. What is something you feel passionate about outside of performing?
Standing at least three feet back from the baggage carousel at airports. Everyone always wants to hug the edge of the baggage carousel so whenever your bag comes you have to jockey for room like you’re in a crowded bar. If everyone stood back like three to five feet, and only approached the carousel when they grabbed their bag, I think we could all agree that the world would be a much, much better place.

Don't miss Sullivan Jones in 'The Winning Side' at Theatre Row's Acorn Theatre through November 4.