Rachel Prather Takes On Seven Questions About A Christmas Carol, Holiday Traditions, and Why Scrooge's Sister Is the Ghost of Christmas Yet to Come 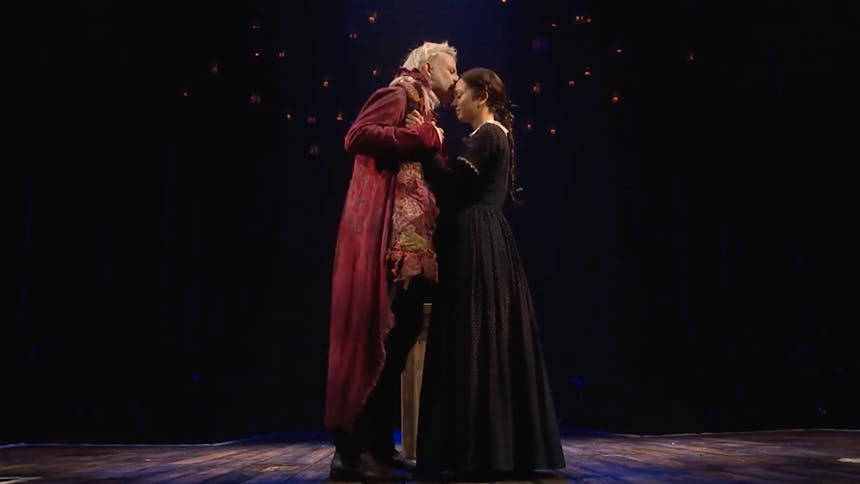 . Directed by Tony Award winner Matthew Warchus (Matilda, Groundhog Day, God of Carnage), this adaptation by Tony winner Jack Thorne (Harry Potter and the Cursed Child, King Kong) bolsters the role of Scrooge’s deceased sister, havng her return to her hardened brother as The Ghost of Christmas Yet to Come in hopes that only she could help him turn his life around. It’s such a powerful choice and very unique to this incredible, special A Christmas Carol.


BroadwayBox recently caught up with Rachel (who Broadway audiences might remember as Papi’s crush Julia in the Tony-winning musical The Band’s Visit) to discuss creating this special moment in A Christmas Carol, her own favorite holiday traditions, and her love of the iconic The Muppet Christmas Carol.

1. Tell me about a small moment in A Christmas Carol that you absolutely love?
There is a moment towards the end of the show where Scrooge and I are looking at his younger self and we both are looking up at younger Scrooge almost with a sense of admiration. It's like a museum piece—we're both looking at this boy that could be anything and kind realizing right then and there that as a child you can be anything you want to be. Having that moment with Scrooge onstage is really touching for me.

2. What was the most influential thing director Matthew Warchus or Jack Thorne said about Little Fan in this telling?
The most important is to remember that Scrooge and Little Fan are siblings, and there is a very strong sense of family in the show. And, actually, it's kind of the last thread that I use as The Ghost of a Christmas Future to bring Scrooge back and remind him of who he could be in his life. So, Matthew telling me to remember that we are siblings was really important for me.

3.  I love that in this telling, Little Fan is the ghost of Christmas Yet to Come. Why do you think they brought the character back in this capacity? What do you think it adds to have it be his beloved sister?
I had been told that originally Jack Thorne had wanted this production to be narrated by Charles Dickens and his sister, but they ended up cutting that idea. But they really liked the sense of family being so tightly tied to Charles Dickens and the story. So, I think bringing Little Fan back—because she is such an important figure in Scrooge's life—was a really great idea for this production. The Ghost of Christmas Future is usually this ominous, vague kind of Grim Reaper-like character and I think actually making that ghost a personal being is scarier for Scrooge, and it’s ultimately this that reminds him that he can be good.

4. This A Christmas Carol has made everyone I know cry when they see it. What’s the last Broadway show to make you cry?
Actually, Harry Potter and the Cursed Child. There's that father/son moment where they realize that they're not so different from each other and that they both have so much love in their heart for each other, and I just lost it. I'm a huge fan of Harry Potter and I was ready for the magic and the stories, but I was not expecting to cry but yeah, the tears were just falling.

5. What is your all-time favorite film version of A Christmas Carol?
I have to go with The Muppet Christmas Carol. Michael Caine is my Scrooge forever. I just finished watching it this year, but I will watch that every single year for the rest of my life. And, actually, that version isn't so far off from the book. So, in classic Muppet forum, it's both childlike and very clever. I love it.


6. Do you have a holiday tradition that you look forward to each year?
Yes. I love baking Christmas cookies and cookie decorating. I grew up doing that with my family. My mom would host a cookie party and invite all of the cousins over, and now I do it up here in New York. I love baking with my husband, and I love sharing that with friends and family.

7. What’s easier to master the bells in A Christmas Carol or the skates of The Bands Visit?
Oh, that’s tough. I'm going to have to say I picked up the bells quicker, but only because I played handbells as a little kid in church. So, I had a little secret experience on the bells. But with skating, at least I got to be bad at it and fall every night so there was that.

Hurry to Broadway’s Lyceum Theatre before January 5, 2020 to catch Rachel Prather this must-see adaptation of Charles Dickens’ A Christmas Carol.