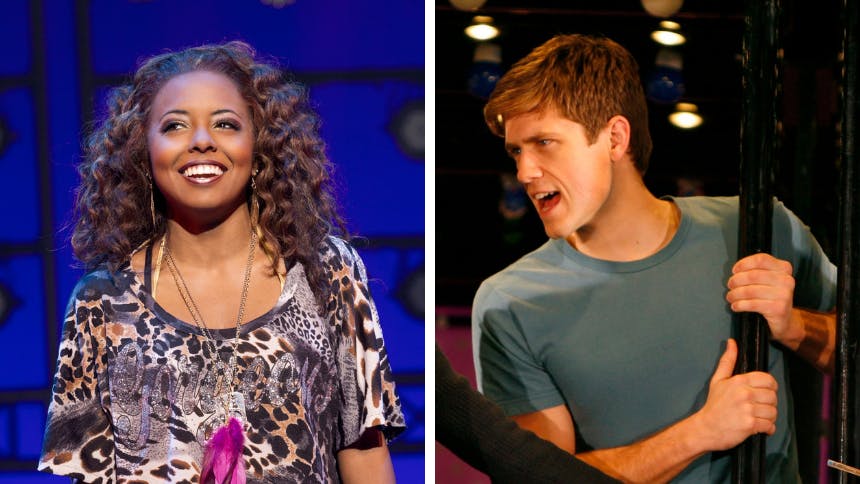 On Sunday, September 26th at the 74th Annual Tony Awards, awards in the Leading Actress and Actor in a Musical were bestowed to Adrienne Warren of Tina - The Tina Turner Musical and Aaron Tveit of Moulin Rouge! The Musical respectively.

Both talented performers delivered dynamic performances in their musicals. With that immense talent, we couldn't help but look back at where it all began. So let's travel back to the first roles Adrienne and Aaron originated on Broadway before making it to the Tony Awards stage in 2021!

Adrienne debuted as Lorell Robinson in the original cast of the 2009 National Revival Tour of Dreamgirls. Enjoy this medley of clips from the production!


In 2011, she had a lot to cheer about when cast in the screen to stage musical Bring It On The Musical in the role of Danielle. This production was the first time Adrienne originated a role on Broadway! In 2012, Adrienne made her Broadway debut with this production at the St. James Theatre alongside Taylor Louderman and Ariana DeBose also making their Broadway debuts.

Aaron jumped on the scene in the national tour of Hairspray as Link Larkin. He made his Broadway debut at the Neil Simon Theatre in the production followed by his second Broadway credit in 2008, Fiyero in Broadway's Wicked. Here he sings "As Long As You're Mine" opposite Kerry Ellis.

In 2009, following runs at Off-Broadway's Second Stage Theatre and D.C. area's Arena Stage, Aaron brought his portrayal of Gabe in Next to Normal to Broadway. Gabe marked the first role Aaron originated on Broadway belting "I'm Alive" to the Booth Theatre each night.


Congratulations to both Tony Award winners - Adrienne, bringing the magnificent Tina Turner to the stage and Aaron, bringing us along with him to Montmartre's Moulin Rouge!