Before There Was Detroit, There Was Pride Rock: Motown Star Brandon Victor Dixon on His Game-Changing Role 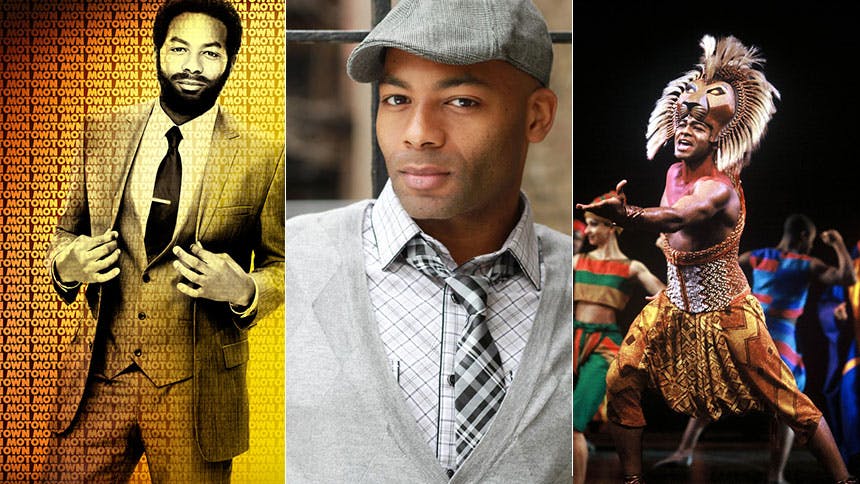 Tony nominee Brandon Victor Dixon is the man behind the music in the Broadway hit Motown. As music mogul Berry Gordy, Dixon shows off the killer voice, sharp dance moves and leading man style that make him one of musical theater’s most sought after young actors.

Dixon burst onto the Broadway scene nearly a decade ago (in 2005) as Harpo in the musical adaptation of The Color Purple, nabbing a Tony nomination for Best Featured Actor in a Musical.

Soon after, Dixon got his first taste of playing a music legend when he took on the title character in Ray Charles Live at the Pasadena Playhouse in 2007. This time, Dixon picked up an Ovation Award nomination. Check him out singing Charles’ “What’d I Say” below.

But before he took New York by storm, Brandon Victor Dixon made his professional debut in 2003 originating the role of Simba in The Lion King National Tour, a career milestone he considers to be the game-changer.

“The Lion King was the first professional role that I booked, and I booked it while I was still at Columbia University. I auditioned for this show for over 18 months between my first audition and when I actually got cast. The summer after my first couple of auditions, they started a Lion King master class, and myself and a number of other actors who have been in and through The Lion King since then were part of this two week master class. We studied South African history and worked on acting exercises and vocal exercises to acclimate ourselves to the show and the demands this show really requires.

The following year, I auditioned again and got cast; but between the master class and when I got cast, a number of the people I was in the class with went into the Broadway production in various roles (understudy Simba or in the ensemble). A part of me was envious and wondering what I could do to be a part of the show. But the fact that none of that happened—and that I was actually cast as Simba in an original production...I would have seen myself and my career very differently if I had been cast as a replacement in the Broadway company or had gone into the ensemble and understudied someone. It really would have changed the way I pursued my next job. But because I was the lead and because I originated it on the road, coming in [to New York] there were only certain things I was willing to audition for. [The Lion King] defined the way I saw myself as a performer and what kind of steps I would take going forward. The Lion King also taught me how to be an artistic professional. To this day, it’s the most difficult professional experience I’ve ever had. And overcoming those struggles made me learn that I could do anything. I owe everything to the family I built in The Lion King. They built the foundation of who I am in this business and I’ll be forever grateful to all of them.” Don't miss this Pride Rock alumnus headlining the Broadway production of Motown at the Lunt Fontanne Theatre.
Newer
The Stars & Creators of Broadway’s Aladdin Share Their Ultimate Magic Carpet Fantasies
Older
Meet Your New Crush: Sex Tips for Straight Women from a Gay Man Hottie Andrew Brewer