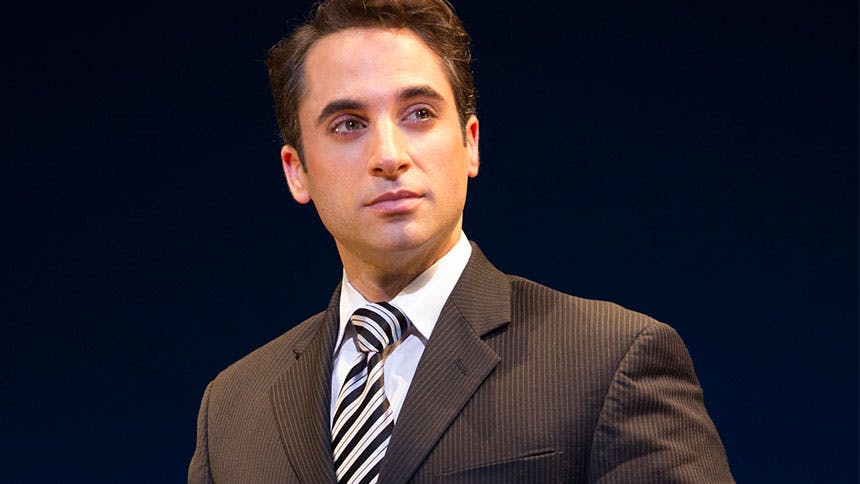 Before leading the Tony-winning Broadway company of Jersey Boys, current star Joseph Leo Bwarie played Frankie Valli on the road for four years and in over 45 cities. In 2011, he released a debut solo album Nothin’ But Love with a follow-up album, Joe Leo, in the works. This week, BroadwayBox caught up with this seasoned Frankie Valli to get his most memorable road story, theatrical inspirations and recording studio fantasies for our Five Burning Questions.

1. You did 45 cities with Jersey Boys. What’s your best on the road story that you tell at parties?
“The Terrible Towel story” — of course. 2009, Super Bowl Sunday. Pittsburgh (home of the Steelers). Spoiler alert—Steelers beat Arizona (but if you didn’t know that, I don’t think you were just crushed). Now, Terrible Towels are yellow towels that Steeler’s fans wave over their heads like propellers. Super Bowl Sunday night, we were playing the Benedum Center, taking our final bows, and the place was filled with Terrible Towels—they don’t leave home without ‘em. I stepped forward to take my bow and some guy throws me a towel. I catch it. Instead of bowing, I wave it over my head. The place comes unglued. I still have the towel.

2. How do you unwind after a show or a concert?
I am usually starving, so food is always part of the plan. Richard Blake (plays Tommy DeVito) and I have recently started “Third Floor Thursdays.” Each week we host the company (in our third floor dressing rooms) post-show for a different themed cocktail and snack. It’s a great way for the company to just hang together, unwind and enjoy some good food and drink.

3. What fictional TV character do you most relate to?
Before Jersey Boys, I originated ‘Chachi’ in the musical Happy Days. So, in essence, I was the new Scott Baio. But in Scott Baio terms, I suppose I am part ‘Chachi,’ part Charles in Charge.

4. Who is your dream duet partner? If anyone in the world could come in and lay down a track with you in the studio?
Some of my most favorite times have been spent in the recording studio. In 2011, I released my debut big band, solo album Nothin’ But Love. I am releasing my second album later this year and there was much debate about having a duet on the album; it never happened. But it would be very cool to sing a duet with Mr. Tony Bennett and maybe we could ask Rihanna to join and add a sexy hook like she has done for Eminem. That seems doable, right?

5. What theatrical performance most inspired you when you were young?
At about the same time, two shows got me fired-up about live theatre and performing—Susan Stroman’s revival of The Music Man and Sam Mendes’ Cabaret. I saw both shows twice. Everything about those very different productions fascinated me. But in both cases, I was in awe of the performances. In both productions, the actors played instruments. Now, I don’t play an instrument, but I sure as hell wanted to after seeing those incredible performers. It’s pretty surreal that Cabaret will be two streets over from the August Wilson starting in March. Safe to say, if you need me, you will find me at the Kit Kat Klub.