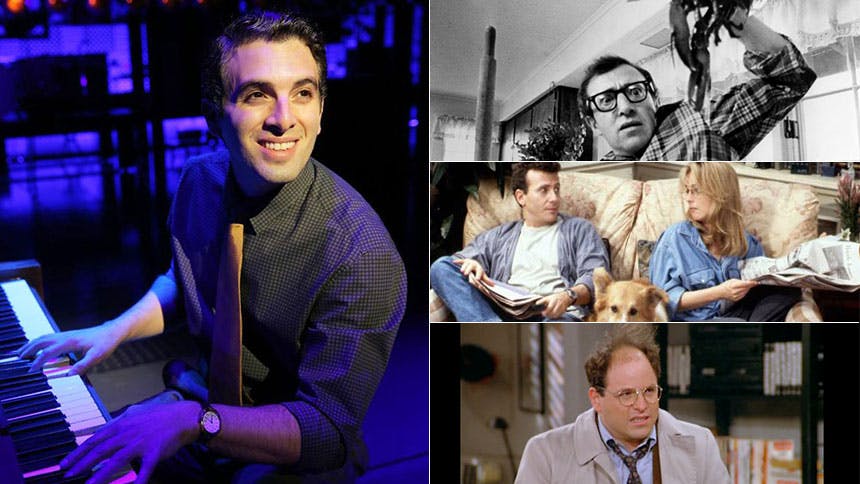 Jarrod Spector has them rolling in the aisles as handsome hypochondriac songwriter Barry Mann in the new musical Beautiful: The Carole King Musical. So it should come as little surprise this Jersey Boys alum finds his inspiration in three award-winning screen comedians. Check out his muses below, then let him tickle your funny bone at the Stephen Sondheim Theatre.

"It would seem like cheating to name Beautiful’s legendary songwriter Barry Mann as inspiration for my role as…Barry Mann. So let me just state for the record that Barry, as well as Cynthia Weil, Gerry Goffin and the incomparable Carole King are all inspirations. But I had to book the role and go through rehearsals and previews before getting a chance to spend any quality time with the real-life Barry, so in order to do justice to the character put on the page by our book writer, Doug McGrath, I stole from three particular screen actors who I grew up watching. Here’s my primer for any 'prospective Barry Manns':

Barry is an unabashedly neurotic hypochondriacal Jewish New Yorker. Pick any Woody Allen character at random and you’ve got a pretty good bead on Barry but Alvy from Annie Hall is just the right base from which to start. Now despite his hang-ups Barry is also charming and confident and manages to get the girl so you’ll want to add some Paul Reiser—as Paul Buchman in Mad About You, of course. Finally, Barry occasionally flies off the handle in sudden bursts of rage so in order to achieve the correct amount of underdog ire it’s necessary to sprinkle in some George Costanza (thank you, Jason Alexander).

And that’s how it’s done! Oh, except for the singing. That may have to be a different list."