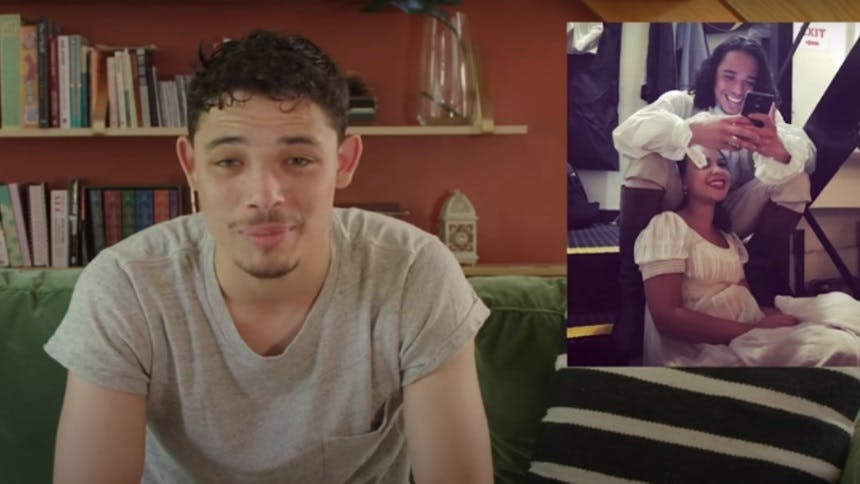 Anthony Ramos is pretty great! The Grammy winner made his Broadway debut as John Laurens/Philip Hamilton in Hamilton back in 2015. In 5 years, Anthony has released an EP (The Freedom EP), an album (The Good & The Bad), appeared on television including "Younger," "Will & Grace" and Spike Lee's "She's Gotta Have It", emerged onto the big screen in 7 films (with 4 forthcoming including this Friday's Disney+ premiere of Hamilton) including 2018's Lady Gaga/Bradley Cooper A Star is Born.

Broadway fans will be keeping an eye out for his upcoming film role starring as Usnavi in Lin-Manuel Miranda's movie musical version of In The Heights due out next summer. He had recently played the role at Washington D.C.'s Kennedy Center in 2018.

Anthony has an incredible YouTube channel where he has released behind the scenes footage of his music videos, exciting live performances and fun surprises he had arranged for loved ones. The channel is really a great window into getting to know the multi-talented Mr. Ramos. In honor of Hamilweek, take a break and learn more about Anthony Ramos as we highlight five of our favorites!


Old Hamilton Photos - A Look Back


5 years ago this month, Hamilton had its first preview on Broadway. Last year this same week, Anthony put together this walk down memory lane with special photos throughout his Hamilton journey. His backstage stories are fantastic.

Will You Marry Me Jazzy? An Engagement in England


We have heart eyes! Anthony is engaged to Jasmine Cephas Jones, fellow Hamilton Original Broadway Cast member who made a splash for her "and Peggy!" as a Schuyler Sister. What a fantastic video memory of such a monumentous occasion.


Watch as Anthony uses his amazing voice to sing along to all of the songs that are his current favorites in all different scenarios as well as spotlighting some of his favorite artists.


Seeing Anthony have this special conversation with his former director and mentor is really heartwarming. Learn how King Lear, Jerry Seinfeld and the generosity of his mentor were stepping stones to his path to Broadway


Nala, their sweet dog, might have stole the video scaling the stairs. Anthony got a culinary assist by Executive Chef of New York City's SoHo House, Brian VanderGast, to create a special dinner for fiancée Jasmine. Fans will learn more about Anthony but also some helpful cooking tips! You have to watch to see the sweet reaction Jasmine had to Anthony greeting her at the door with a bouquet of flowers and then laughing through crafting the salad Brian taught him to make.