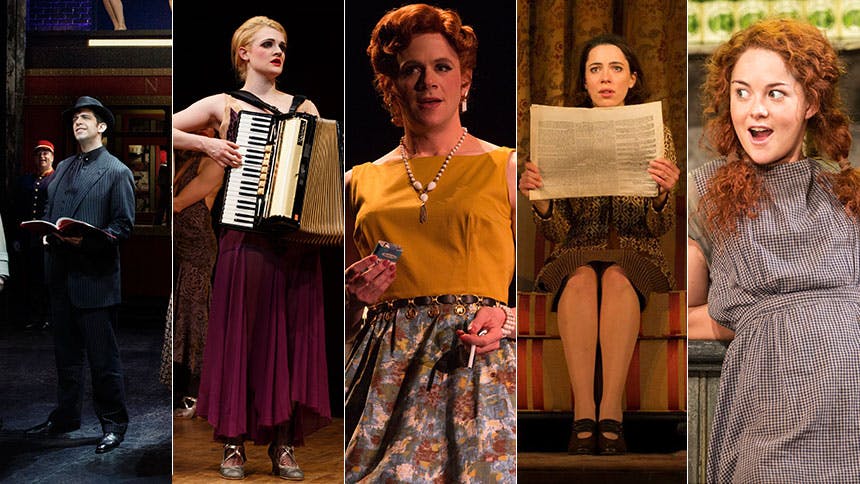 As the final show of the spring 2014 opens tonight (Yay Cabaret!), BroadwayBox looks back on the five up-and-coming performers from the spring that gave breakout performances in their respective plays and musicals. Check out the fab five below and click here to review the five breakouts from the fall.

The Killer Comedian: Nick Cordero is runnin’ wild in and runnin’ away with the new Broadway musical Bullets Over Broadway. His performance as gangster Cheech (a thug who turns out to be a brilliant playwright) is a critical and fan favorite, and his numbers “Up a Lazy River” and “Tain’t Nobody’s Biz-ness If I Do” are met with a mixture of howling laugher and sustained applause. Broadway’s found a new baby in Nick Cordero.

Fun Fact: Cordero writes and performs original music as part of the rock group The Means.


The Quadruple Threat: Gayle Rankin makes a strong impression as the sailor-hungry hooker turned Nazi arm candy, Fräulein Kost, in the current revival of Cabaret. The Scottish actress, who appeared off-Broadway in Tribes, ends the show’s first act with a haunting rendition of “Tomorrow Belongs to Me” while accompanying herself on the accordion. It’s a visual image that stays with you long after the lights burned out in the Kit Kat Klub—and for that we say, “Brava!”

Fun Fact: Rankin was, possibly, the first Scottish drama student ever at Juilliard.

The Magnetic Siren: Drama Desk winner Nick Westrate gives a remarkable performance as Gloria in MTC’s Casa Valentina. Like a cross-dressing Joan Holloway, Westrate’s Gloria is the kind of powerful, confident woman you can’t take your eyes off of. You want to know this woman; you want to know the man inside this woman; you want to know the actor who can find this character and deliver her to us in such a captivating way. If you were going to pledge this sorority, you’d hope for Westrate’s Gloria to be your big sister.


The Fragile Rock: Rebecca Hall’s chilling performance in the first Broadway revival of Machinal still has not thawed out. As Helen Jones, a young 1920s housewife driven to murder, Hall operated on all cylinders and her descent into madness was positively riveting; she was fragile enough that a gust of wind could destroy her, but somehow strong enough to persevere. Here’s to hoping Tony nominators remember this extraordinary Broadway debut.

Sarah Greene (The Cripple of Inishmaan)

The Irish Firecracker: It’s no wonder Sarah Greene was awarded an Olivier nomination for her feral performance as Irish tomboy Helen McCormick in Martin McDonagh’s comedy The Cripple of Inishmaan. And what a treat New York audiences are also getting the chance to see her terrorize the small Irish island. Equal parts sweet and sour, Greene’s Helen is the kind of girl you can see getting away with murder (literally), while at the same time stealing the heart of the sensitive cripple boy in the corner.

Fun Fact: Tony winning director Michael Grandage knew he wanted to cast her right away. He told The Daily News, “It was one of the few occasions when an actor comes in and there is no question. Sarah opened her mouth and that was it.”


Off-Broadway’s Queen Bee: It’s no wonder everyone in high school wants to be Heather Chandler, especially when she’s brought to such vivid life by newcomer Jessica Keenan-Wynn. She’s the kind of girl you want to either date or be; it’s easy to see why the two other Heathers and Veronica just want to be in her orbit. Jessica Keenan-Wynn’s Heather is more than just a star, she’s the sun.