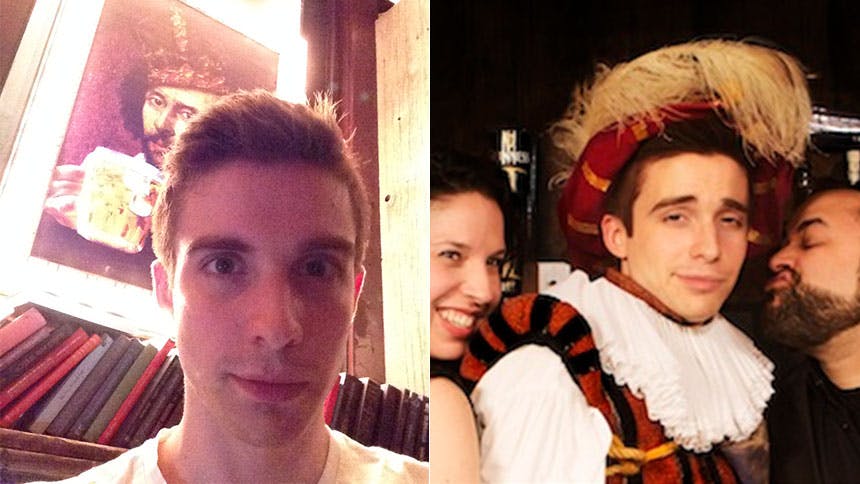 Newcomer Phil Gillen is a lethal combination of funny, charming, Ivy-educated and drunk. Gillen is winning over barflies and Bard fans as the unofficial master of ceremonies at off-Broadway’s Drunk Shakespeare, an interactive new show in which audiences watch a troupe of talented young performers act out an abridged version of Shakespeare’s Macbeth. And what makes this Macbeth worth staying awake for is that one actor (and it always rotates so see it more than once) is getting completely hammered. It’s the perfect way to feel both intellectual and rowdy (The New Yorker meets Time Out New York). Below, Gillen talks Shakespeare drunks, cartoon crushes and napping it off.

1. My go-to drink of choice:
Miller High Life. It's the champagne of beers. A close second would be Andre, the beer of champagnes.

2. The Shakespeare character I most relate to:
The Porter from Macbeth. Everyone else is like, "we're in a Shakespearean tragedy," but he just wants to sleep, drink, make a few dick jokes, and drink.

3. The Shakespeare character I’d want to go out drinking with:
Sir John Falstaff. If you're not familiar, he's the drunk uncle of the Shakespearean canon.

4. My favorite Shakespearean love story:
Hamlet and Horatio. A bromance for the ages.

5. The most used app on my phone:
Find my iPhone.

6. TV show I think everyone should be watching:
Game of Thrones. It's the champagne of TV shows.

7. The most played album on my iTunes is:
Of all time? If we're being honest, it's probably the Space Jam soundtrack. Though Frozen is quickly catching up.

8. My desert island Shakespeare play would be:
The Tempest.

10. If I could stop the world for a drunk point of order, I would:
Take an aggressive nap. Professional drinking is hard work, but someone's gotta do it.

See Phil Gillen in Drunken Shakespeare at Quinn's Bar and Grill in Midtown.