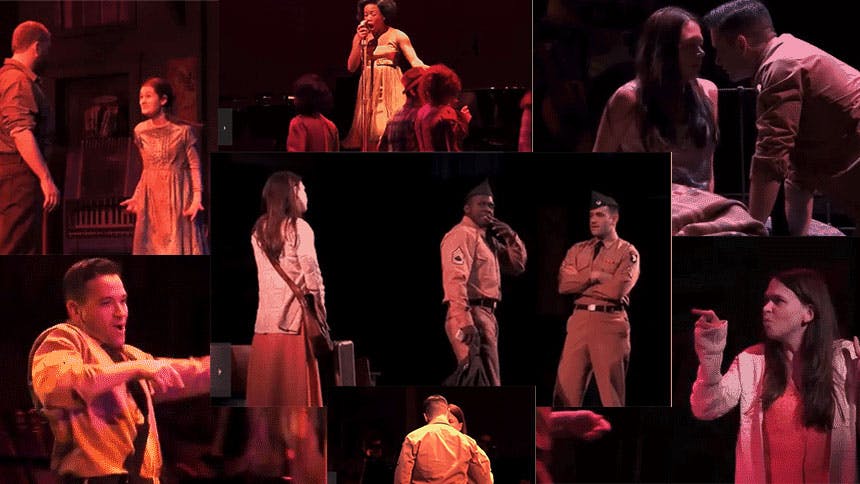 Broadway is buzzing about Roundabout Theatre Company's critically acclaimed production of Violet, but you’re still not sure if it’s the show for you. Yes, it stars two-time Tony winner Sutton Foster and singing, charming hunks Joshua Henry and Colin Donnell. And sure, you want to see the heartwarming tale of a physically scarred young woman who goes on a long journey to be healed, but ends up with an emotional healing instead of a physical one. But maybe you just need an extra push. Well, today’s your lucky day: here's eight reasons (through animated GIF, of course!) why you really can't miss this limited production.

2. Joshua Henry and Colin Donnell play these competitive army buddies, and you are so torn as to who to crush on more. It’s a 105-minute ebb and flow of crushing.

3. Because Colin Donnell breaks out this signature dance move. Yeah…

4. Young Violet, Emerson Steele is such a find. She’s radiant and her voice soars. Then when she sings with Sutton, it’s magic.

5. There’s a great romance between the gorgeous solider Monty and the insecure Violet.

6. But wait, it’s actually a great love triangle between Violet, Monty and his fellow solider Flick, a passionate African American solider traveling through the South in the early 1960s.

7. The vocals in this show don’t quit. If you are fans of Singing with a capital S, then make a date with Violet. Shout-outs especially for Josh Henry’s “Let It Sing” and Rema Webb’s “Raise Me Up.”

8. And once again, you don't want to miss Sutton Foster in what The New York Times calls “ a career-redefining performance.”