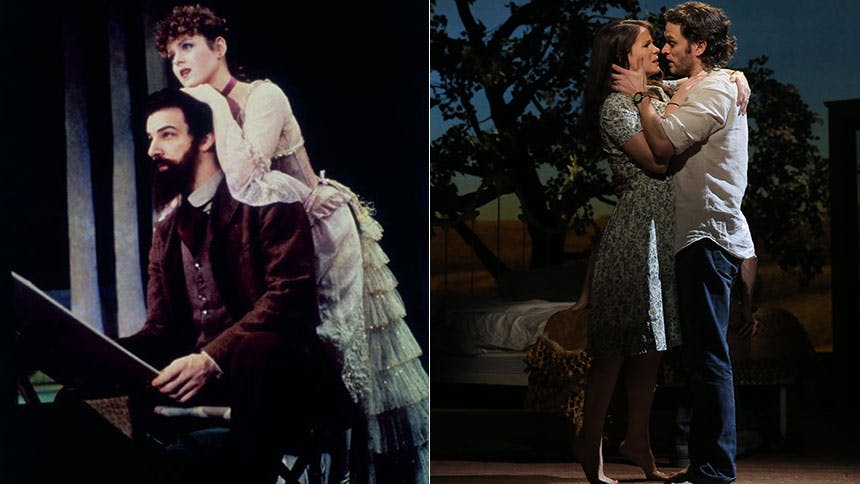 The 1984 season introduced Broadway audiences to Stephen Sondheim and James Lapine’s precious gem Sunday in the Park with George, a passionate and beautifully spun musical about a short-lived but powerful romance between an artist and his muse. The show, which opened to mixed reviews, went on to be nominated for 11 1984 Tony Awards (winning two, but losing the big prize to the splashy and groundbreaking La Cage aux Folles) and won the 1985 Pulitzer Prize for Drama. And thanks to the DVD/VHS recording of the original cast, the musical recruited more and more die-hard fans as the decades past.

Now 30 years later to the season, Broadway is blessed with another gorgeous musical about a short-lived and powerful affair, The Bridges of Madison County. And like Sunday, Bridges is more a piece of living art than a splashy, modern musical. And that (along with the eight reasons below) is why fans of Sondheim’s Sunday in the Park with George should run to the Schoenfeld Theatre to see The Bridges of Madison County.

The Leading Man Is Artist (Who Sings Like a God)

George is a painter who needs a blank page or canvas; Robert Kincaid is an artist whose canvas is the world inside a frame (…he’s a photographer).


In “Color and Light” the Sunday audience learns George has problems focusing on his relationship with Dot; The Bridges crowd gets one better as they hear about Robert’s relationship issues through his first wife in the soulful tune “Another Life.”

While we love a good Disney fairy tale, Sunday and Bridges find the beauty in the harsh reality that life isn’t always perfect, and that soul mates don't always end up together.

“Everybody Loves Louis” Vs. “Almost Real”

Both Dot in Sunday and Francesca in Bridges don’t marry the men they once thought they would and each explains her reasons in standout songs.

The Scores Are Epic

And while we are talking about standout songs, both Sunday and Bridges offer musical fans epic scores to sing along with, or to just cry alone, drinking wine and reevaluating all your life decisions.


Just thinking of Bernie and Mandy belting “Move On” is enough to give you chills, and if you squint, you can almost see them passing that torch to Kelli O’Hara and Steven Pasquale.

Family Comes First in Both

Francesca stays behind because the love of her children is too great. In Sunday, Marie tells her grandson George (the other one) that children and art are the only things that matter in life.

Because You Know Better

If you like Sunday enough to read to the bottom, you know good theatre. So what are you waiting for? Invest a night in something real, something moving, something like The Bridges of Madison County