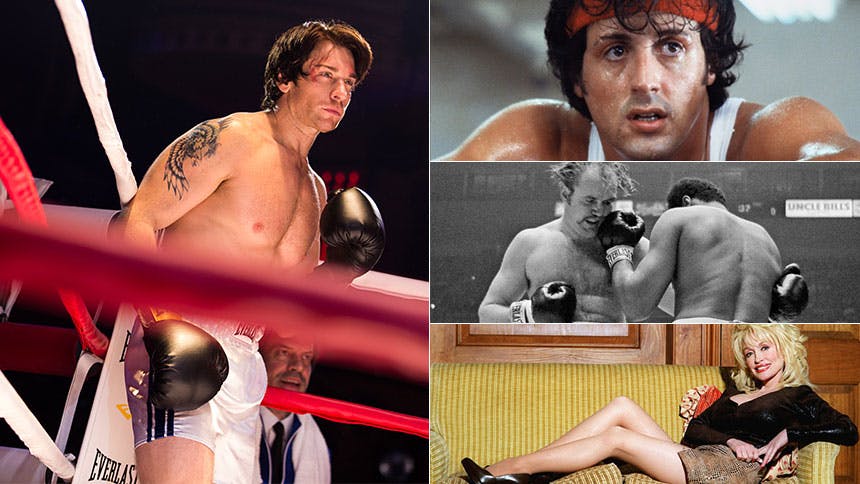 Andy Karl is giving a knockout [how can you not take advantage of it] performance as Rocky Balboa in the big Broadway musical Rocky. The veteran of Jersey Boys, Legally Blonde, Drood and Wicked brings such an emotional depth to the aging Philly boxer; what Sly Stallone was able to do with a close-up on screen, Andy Karl does with a song on stage, and it’s magic. His nose ain’t broke, but our hearts sure were.

BroadwayBox caught up with the 2014 Drama Desk, OCC and Drama League nominee to find out how he went about bringing the iconic Rocky Balboa to Broadway. Below, Karl shares his three biggest Rocky muses.

The biggest one is obviously Stallone. It’s right there in front of my face. When I first started doing the role three years ago, I put myself in the mindset of what Stallone had to go through to get this movie made. He fought so hard; it’s absolutely inspiring. Then when I first started with the script and watched the movie, I felt comfortable taking the vocal energy of his performance and the physicality (the ticks he uses in the movie). The entire world has seen Rocky Balboa in six films; they have gone on this journey and lived with this character for generations, so to try to do something completely different with it is missing the point—you’re taking on a historical figure. I justify it how Ben Kingsley did Gandhi or Meryl Streep with The Iron Lady. They took on the voice, the physicality and the characteristics of this real person, and I’m treating Rocky Balboa as if he actually exists in the world. Taking on those mannerisms but, at the same time for me as an actor, keeping it as honest and as natural as I possibly can. I have a great time just slipping into [Rocky’s] shoes.

For number two, I’m going to go back to who Stallone used as his inspiration for the story: the 1975 bout between Chuck Wepner and Muhammad Ali. Muhammad was this world-renowned amazing contender and he chose to fight Chuck Wepner—this nobody as far as the boxing echelon—for 15 rounds. Chuck was called The Bayonne Bleeder and that was sort of his thing. I read the Sports Illustrated story while we were in rehearsals, and reading the story and knowing someone out there has actually lived this Rocky life…getting the call of duty to step up and fight the best and greatest in the world is a huge accomplishment for someone. Whenever I hear the scene where I’m offered the fight with Apollo Creed, every night a picture of Chuck Wepner just flashes in my brain—this nobody, this non-contender who got a shot. So as far as a real-life character, I like to use that story. He’s the real-life Rocky.

For the third, I’m going to say Dolly Parton because she’s the nicest human being while being one of the most iconic, amazing people out there. Doing Joyful Noise and 9 to 5 with her, I saw this superstar who cares about every single person in the room. Anytime I think of her, I smile. I would like to be that in my life; it’s my dream to have people think of me and smile and have nothing but good things to say. I still get a Christmas card from her every year; she’s incredible. Being given the responsibility of leading this huge show for the first time, and keeping the integrity of myself while all this is happening, I just think about Dolly Parton—who has a 1,000 times more to deal with than I have to, and she still touches people hearts.

If there’s a fourth inspiration—and I don't mean to sound self indulgent—you have to look inside at yourself as an inspiration and whatever hard time you went through and the fact that you went through it to become something better than you were. With this show, and this opportunity, I look back and I’m proud of the person I became to handle something like this. It took luck and years of going after it, and not getting caught up in negativity. In order to understand the Rocky story, you need to find the part of yourself to go above and beyond.