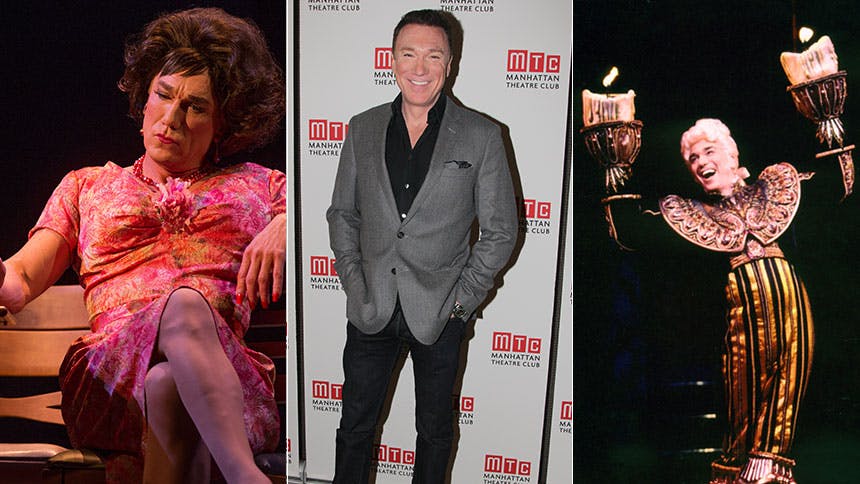 Patrick Page is giving an undeniable star performance as George/ Valentina, a crossing-dressing man who risks losing his Catskill retreat, in Harvey Fierstein’s world-premiere play Casa Valentina. To go into everything Page and the character go through would spoil it (and take a while), so just get your ticket and let this moving, magical new work rock your world.


It’s been quite a Broadway season for Page, who gave one of our favorite villain performances this fall as the hateful southern lawyer Rufus Buckley in the drama A Time To Kill.


Page is a Broadway mainstay, often playing the perfect antagonist in works like Spider-Man, The Lion King, Julius Caesar, A Man for All Seasons and Cyrano de Bergerac.

Page in 'A Man For All Seasons,' 'Julius Caesar,' 'Kentucky Cycle,' 'The Lion King,' 'Spider-Man: Turn off the Dark,' 'Dr. Seuss' How the Grinch Stole Christmas,' 'A Christmas Carol,' 'Cyrano de Bergerac,' and 'A Time to Kill.'

A celebrated Shakespeare performer, Page has played all the Bard’s best roles in regional theatres throughout the country.

Yet for this Casa Valentina star, it’s the colorful role that took him from classical theatre to musical theatre that he considers the real game-changer. Below, Page recalls how a failed Angels in America audition and an afternoon with Disney changed the course of his career.

To preface, I think [Casa Valentina] is because it allows me to do something that's quite different in terms of the work I’ve done in New York, but in terms of the game changer for me that altered the course of my career: I was fairy new to New York, and I had mainly performed classic plays in regional theaters—this was 20 years ago—and I was auditioning for the first national tour of Angels in America. And I was right in the middle between Prior and Lewis—I wasn't really right for either of them but I was reading both, and I didn't get either.

It was one of those auditions that went on all day, and at the end, Jay Binder came over and said, “this isn’t going to happen for you, but can you do me a favor? I just got a phone call I lost my reader for an audition I’m doing tomorrow. Would you like to be the reader?”

And that meant I would spend a full day in the room with a casting director, and I was like, “absolutely, I’d love to do that. What’s the show?”

And he said, “the first national tour of Disney’s Beauty and the Beast."

I immediately thought I know nothing about musicals; I’ve never done a professional musical. I was reading opposite an actor auditioning for Lumiere, the French candelabra, and I was playing Cogsworth, the British butler character, and Jay Binder did something I’ve never seen before or since that. He said, “switch roles.” And when we were done he said, “I think you can play this role.”

And he said, “I’m going to get you a singing coach and you work on the song, and just come back tomorrow and audition for the producers.”

So I did and it went well. And I said to my agent, “please get me out of this thing. I am a classical actor with a capital C and a capital A, and I don't want to do this.”

And to my agent’s credit, she said, “you really need to do this.”

So I did the final audition, and in the room it felt really right—and I really didn't want the part. And indeed, I came home and I took a nap, and, by the end of the nap, I got a call offering me the part.

And that's how I started what is now a 20-year association with Disney. I’ve done Beauty and the Beast, The Lion King and I’m about to do The Hunchback of Notre Dame; its been one of the most wonderful collaborations of my career. On that tour, I met my wife Paige Davis, who was in the ensemble and then later played Babette. Now, musicals are part of my career, but at the time it was never something I thought I might do. In every way, that moment Jay Binder said, “would you switch parts” was the game changer for me.