Too Soon to Get Excited for the Tony Awards? How About Just Best Actress in a Musical 2020? 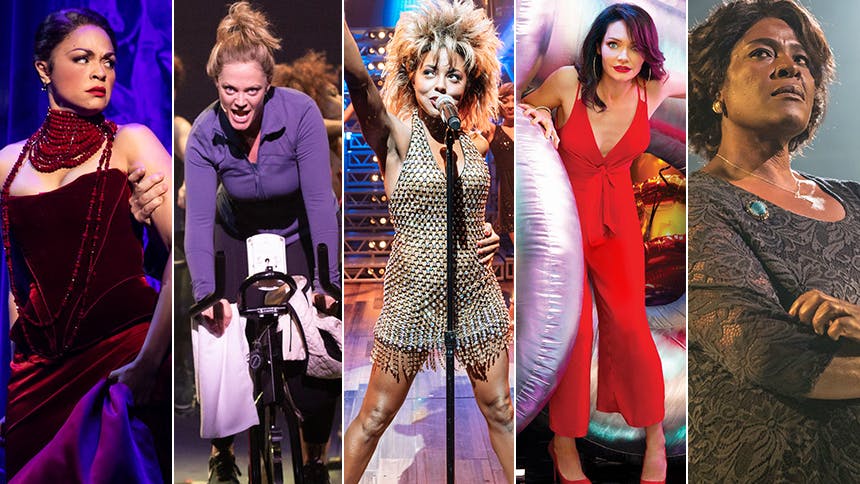 While on one hand the Broadway season has really just begun, on the other, it’s never too soon to talk about the Tony Awards. This year’s 2020 awards are particularly exciting for theatre nerds who like a debate because the Best Actress in a Musical race is lit AF! Let’s discuss.

The 2019/2020 Broadway season kicked off like a firework thanks to the Broadway return of Tony Award winner Karen Olivo. As the sparking diamond Santine in the musical adaptation of Moulin Rouge

, the former In the Heights, Hamilton, and West Side Story star delivers another passionate and incredibly sung performance! She takes you on a journey with this character and each beat along the way is perfection. She wipes away the memory of Nicole Kidman and makes this Moulin Rouge all her own.


Jumping next to Tony nominee Adrienne Warren and her electrifying performance as Tina Turner in Tina: The Tina Turner Musical

. Her performance defies logic—how does that huge voice come out of that tiny person; how does she have the energy to sustain this six times a week; and how does she make it all look so effortless? Consider this the new gold standard performance of bio-musicals on Broadway. Adrienne was nominated for an Olivier Award for her performance in London but lost to Sharon D. Clarke for her performance as Caroline in London revival of Caroline, or Change. Will having the home-court advantage help Adrienne this time around? Especially with a community who has seen her grow from Bring It On to Shuffle Along to Tina.

. The former star of Broadway’s On the Town, Cry-Baby and Company has some heavy material to deal with in Jagged but Elizabeth brings such depth and truth to this suburban mom struggling with addiction. It’s a layered, dramatic performance in a musical, a la Next to Normal. Then when she sings “Forgiven” or “Uninvited”, audiences gasp.


The first starring performance in 2020 comes to us from Juilliard’s award-winning soprano Shereen Pimentel. In what is sure to be a breakout Broadway performance, Shereen plays Maria in Ivo van Hove’s totally reimagined West Side Story

. Previously, the role of Maria earned Tony nominations in the original 1957 Broadway production, the 1980 revival, and the 2009 revival, though no Maria has ever won a Tony Award for the role.

. Her performance as Elizabeth Laine, a woman living with dementia in the Midwest during The Great Depression, is the best part of the show and just wildly captivating from start to finish. For the production’s off-Broadway run at The Public Theater, Mare was nominated for a 2019 Outer Critics Circle Award, and British actress Shirley Henderson won the 2018 Olivier Award for North Country’s West End run.


A word here about the incoming Broadway transfer of Six. While it was easy to say that Kristin Stokes is featured in The Lightning Thief, deciphering billing in Six gets trickier. It’s safe to say all the queens in this Best Score frontrunner are featured. For the West End run, all six ladies were nominated together (very Alice and Emily in Side Show) as featured, so we are going to jump to another British import, Company.


Tony Award winner Katrina Lenk got the job all of NYC was talking about, the first woman to play Bobbie in Stephen Sondheim’s Company

on Broadway. She is a fierce actress, so no doubt this Bobbie will be magnetic and heartbreaking (Lenk’s trademark). Marianne Elliott’s Olivier Award-winning production starred Rosalie Craig in the UK and she was nominated for a 2019 Olivier, while both Larry Kert and Raúl Esparza were nominated for Tony Awards for their Broadway performances as the eternally single New Yorker in previous productions of Company.


March 2020 ends with Jeanna de Waal as Diana, Princess of Wales, in the new bio-musical Diana

. Created by the team behind the Tony-winning musical Memphis, the show follows Diana Spencer through her marriage to Prince Charles. It’s a behemoth role—everyone knows Diana and expectations are high—and if Jeanna wins the hearts of Broadway as The People’s Princess, she will reign supreme.

. A longtime darling of the West End, the British actress took home the 2019 Olivier Award for her raw, passionate, and well-sung performance as Caroline. With that pedigree, Sharon arrives in NYC a 2020 Tony Award frontrunner everyone in town is eager to see for themselves.


As of now (because one never knows what will be announced next), the final entry into the 2020 Tony Award race is Tony nominee Carmen Cusack, who returns to Broadway as US Ambassador and playwright Clare Boothe Luce in Lincoln Center Theater’s original musical about LSD, Flying Over Sunset

. Fans are hungry to see Carmen back on Broadway after her breakout debut performance in Bright Star. She’s such a gifted performer, that whatever she does is sure to wow audiences—especially in a new musical from James Lapine, Michael Korie, and Tom Kitt.

It’s Hollywood, 1957. Cary Grant, Clare Boothe Luce and Aldous Huxley are about to take the trip of their lives in @FlyingOverSunset. Tickets on sale now at FlyingOverSunset.com!

Tina: The Tina Turner Musical
New
Discount up to $50

Girl From The North Country
New
Discount up to $30