Scotland, PA & 10 Other Musicals Based on Shakespeare Plays 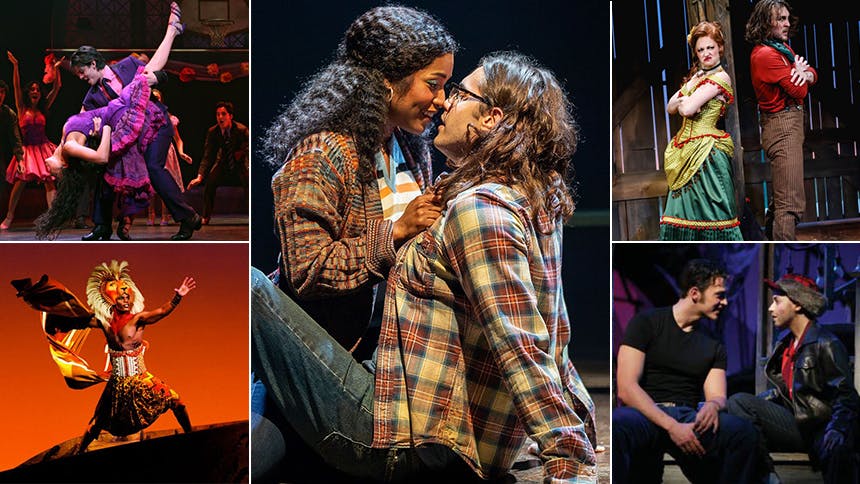 is absolutely terrific and funny on its own, but it becomes all the more impressive when you hold it against its original source material, William Shakespeare’s bloody tragedy Macbeth. Based on the cult film of the same name and adapted for the stage by Michael Mitnick and Adam Gwon, Scotland, PA moves the action from medieval Scotland to 1970s Pennsylvania, where the killer husband and wife duo will do whatever it takes to become fast good giants.


It’s an incredibly fun (and critically-acclaimed) reinvention of the Shakespeare story, following in the footsteps of beloved musicals like West Side Story and Kiss Me, Kate. Below BroadwayBox looks at 10 musicals that reinvent the Shakespeare plays they are based on.


One of the most beloved musicals of all-time is Arthur Laurents, Leonard Bernstein, and Stephen Sondheim’s New York City-set adaptation of Romeo and Juliet. The Capulets and Montagues are two rival street gangs, the young Puerto Rican immigrants who make up the Sharks and the Polish, Italian, & Irish teens who make up the Jets. What could be better than the way the creators turn the famous balcony scene in Romeo and Juliet to the fire escape scene and “Tonight”?!


The off-Broadway musical comedy Desperate Measures sets Measure for Measure— Shakespeare’s problem play about sex, virtue, hypocrisy, and government corruption—in the Wild West, and the result is intoxicating. The musical, which ran at the York Theatre in 2017 and at New World Stages in 2018, won Drama Desk Awards for Best Music and Best Lyrics and the OCC Award for Best Musical.


The Elvis jukebox musical is actually an adaptation of Twelfth Night. The original production starred Cheyenne Jackson as the Elvis character, Chad, and Jenn Gambatese as Natalie, who later disguises herself as Ed to win over Chad’s friendship and affection. Both actors were nominated for 2005 OCC Awards for their performances.


Disney’s Tony Award-winning Best Musical The Lion King is based on one of the Bard’s most famous and quotable tragedies, Hamlet. Like in Hamlet, the brother of the king (Claudius/Scar) kills the king in order to take his kingdom; the young prince (Hamlet/Simba) can’t cope; but eventually he must avenge his father’s death. Which makes Nala Ophelia and the lovable Timon and Pumbaa Rosencrantz and Guildenstern.


This jukebox musical features rock hits from the ‘50s & ‘60s and plays with The Tempest (and the cult 1956 science fiction film). Instead of a remote island, Doctor Prospero and his daughter, Miranda, live on a remote planet and when Captain Tempest crashes his spaceship there, all hell breaks loose. The musical won the 1989/1990 Olivier Award for Best Musical (beating out big hits like Miss Saigon and The Baker’s Wife).


Another adaptation of Twelfth Night features the music of the great Duke Ellington and starred Tony winners Tonya Pinkins and Andre De Shields. Set in 1940s Harlem, the only way talented songwriter Vy (Pinkins) could write songs for the great Harlem band leader the Duke is to disguise herself as a man. Though the musical only ran 61 performances on Broadway, Tonya and Andre were both nominated for 1997 Tony Awards for their performances.


This musical adaptation of The Merry Wives of Windsor moves the action to the Wild West following the Civil War and features a cool bluegrass score. It played at Seattle’s 5th Avenue Theatre in 2007 with a Broadway transfer at the Belasco Theatre announced but then scrapped. Randy Quaid starred as Falstaff.


Diane Paulus’ raunchy and hilarious The Donkey Show is a loose disco-style take on A Midsummer Night’s Dream. Part nightclub, part theatre experience, the play was a massive hit, running six years off-Broadway and a decade at the ART in Cambridge.


Rodgers and Hart have the distinction of creating the first Broadway musical adaptation of a Shakespeare show. Their 1938 musical is inspired by Shakespeare’s The Comedy of Errors. It’s a pretty straight forward adaptation, but groundbreaking none the less. The musical has only been revived once on Broadway in 2002. Similarly, three other musicals that must be mentioned here (though more straight forward than West Side Story or Scotland, PA) are the Tony Award-winning musical Two Gentlemen of Verona, Michael Friedman’s Love's Labour’s Lost and Shaina Taub’s Twelfth night, all of which began at The Public Theater.