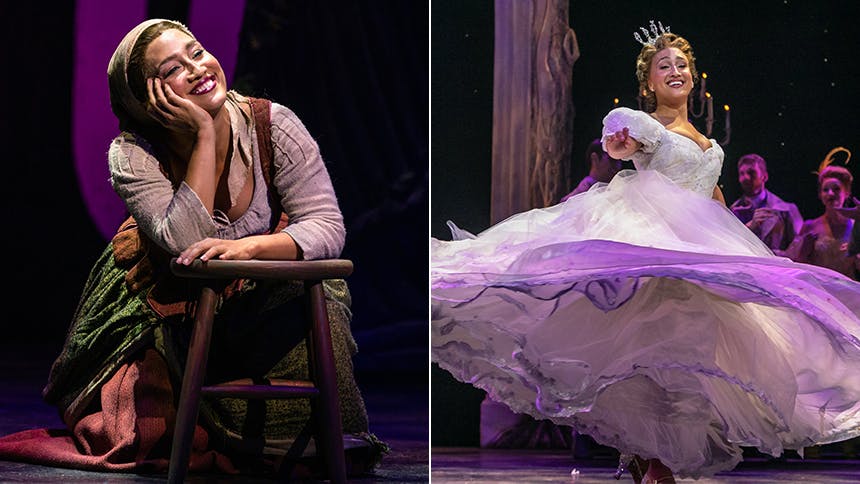 
BroadwayBox caught up with Ashley to discuss finding her Ella in the 2019 landscape, why playing Elsa on Broadway feels like the Olympics, and the importance of Barbra Streisand and Victoria Clark in her childhood.

1. What was your reaction when you found out you’d be playing Cinderella in this production?
As an actor, I try not to make “getting the job” the measure of success. I try to make the goal giving the best, most prepared audition I can, and leave it at that, because whether or not I get it may not have anything to do with me or be anything I can control. I try to prepare as if it’s not necessarily about getting this part, but just in giving a good enough audition that the people behind the table will hopefully become generally invested or interested in me getting a part, at some point. Therefore, it’s always a feeling of surprise and delight when my agent calls to tell me that I’m going to officially get the part. That’s always a real thrill.

2. When creating your Ella, what was important to you? What did you want to infuse her with?
I really enjoy playing classic ingénues, but one thing that came as a challenge this time was making sure that Ella’s perpetual optimism came from a genuine place. In this modern age, the feminist in me wants to get angry and offended by the cruelty Ella deals with. Something we really worked on in the rehearsal room was in finding choices that strayed away from anything negative or bitter. Ella’s always hoping that her stepmother will change her mind, will be kinder, will let her go to the ball. In the end, I realized how strong this characteristic is. Ella doesn’t ever feel like a victim. It’s about constantly hoping for something better. I’ve noticed that playing her and being in her mindset each day has made me slightly more positive that way. It’s been a gift in many ways to get to spend time with her.

3. Which of the many filmed versions of Cinderella was your Cinderella growing up? What did you love about that version?
Disney’s Brandy Cinderellla! Come on! Whoppi Goldberg, Jason Alexander, Whitney Houston, Bernadette Peters?! That was an all-star production. I wish we could belt “Impossible” on the way to the ball in our production, too. =P


4. What was it like to play Elsa on Broadway? How did performing “Let It Go” feel?
As an understudy, it always takes a little bit of time to feel confident in your performance because you've never done it before. So, it took me a number of performances before I felt I could relax and enjoy doing it. "Let It Go" is like riding the most thrilling ride because the audience is so hyped. That onstage costume change is like jumping off an Olympic diving board, and you can’t tell if you set it up right until the change happens. You're totally bluffing, and then that applause happens and you're like, "Phew, thank god that actually worked because I'm out here with my arms out wide and my head up, and for all I know I'm actually naked..." That’s why it’s really important to me to make sure that my understudy, Erin Burniston, feels as confident as she can about all of Ella's magical onstage costume changes. As an understudy that can be the most stressful part. It’s the only thing you can’t practice on your own. Luckily, we have an INCREDIBLE team backstage who makes all the magic happen. We absolutely couldn't do it without them.


5. Which of your Broadway shows did you have the best time in? What made it so special?
Every show I’ve done has had something special and unique about it; it’s hard to choose a favorite. Memphis was my first show on Broadway, and it was a total blast every night. Every time the ensemble came onstage we were somebody completely different. From a dingy, smokey club, right to kids on a playground, right to a joyous church choir. The dancing was an absolute joy. That was the first time I understudied a lead as well. I learned so much about how to take care of your voice doing a contract eight times a week.

Doing Annie meant a lot to me for a number of reasons as well. It was a dream come true to work with James Lapine and Andy Blankenbuehler. Andy came in every single day with completely brand new ideas from scratch. I don’t know where all his creative genius came from but his work ethic was clear and awe inspiring.

Now, doing Beautiful might have been the most personal. It was like a family at the Sondheim for the six years that the show was open. We didn’t know we were in a hit until a swing came backstage one day saying, “You guys, there’s a line to get tickets for this flop that goes around the block!!” Jason Howland is one of the most wonderful musical directors there is. He was responsible for a great number of decisions that made the show work. We worked on my song, "The Locomotion" to get it to a place that was personally catered to the way my voice works. I’d never had the opportunity to be creative like that on a Broadway show. It still blows my mind to see clips of productions in Australia and Japan and think, oh wow, I thought of that acting beat and they’re still using it. A truly amazing opportunity that meant a lot to so many of us.


6. Who were the voices you grew up singing along to?
When I was really young I loved Julie Andrews actually. Everything about her seems so pure and beautiful. As a teenager, I got angstier, and, of course, I loved singing along to Idina Menzel. I would imitate her placement and belt along to The Wild Party and then of course, Wicked. But the person I idolized by far in my childhood was Barbra Streisand. I was pretty obsessed with her and her music, I sang along with her constantly. Starting at around age eight, I had a birthday party for her every year. When I was 14, I got more self-aware and decided to have one last big bash…she actually found out about it and sent me a thank you note! She’s as good as it gets in my book.

7. Cinderella will undoubtedly be many young kids’ first musical. What was yours? What do you remember about it?
My first Broadway show was Titanic. My parents were really into Maury Yeston after seeing his Phantom at Westchester Broadway Theater. We went to one of the first previews of Titanic, and I remember my parents picking out Brian d'Arcy James and saying, “Wow he’s a star!” It was a magical show. When the book of song selections and CD arrived in the mail, we played it everywhere—in the stereo at home, in the car. I would sing along with Victoria Clark and my dad would give me notes. That score will always have a very special place in my heart.