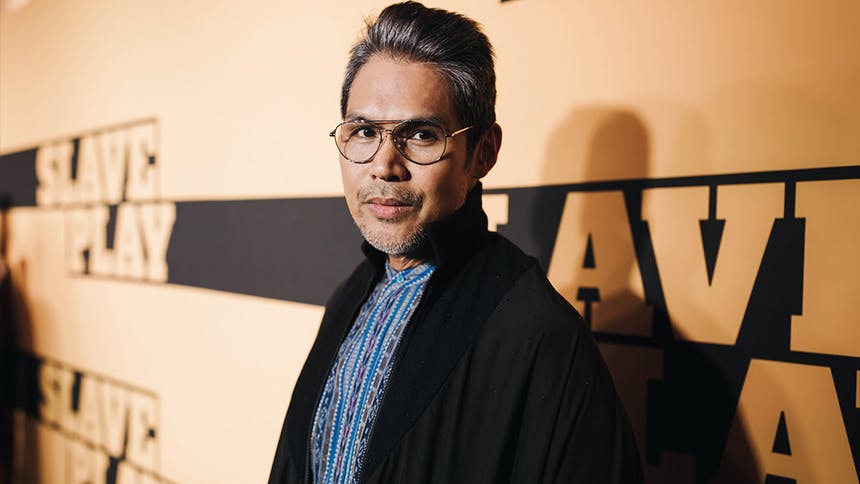 Tony Award winner Clint Ramos is one of the most in-demand designers working in the theatre today. His acclaimed list of credits spans both set and costume design, both play and musical. He returns to Broadway as the scenic designer of the must-see new Broadway blockbuster Slave Play

. Clint won his Tony Award for designing the costumes for Eclipsed and received two other nominations for his work on Once on This Island and Torch Song. Also this season, he designed the costumes for the current revival of The Rose Tattoo and both the set and costumes for the upcoming Second Stage play Grand Horizons.


BroadwayBox caught up with Clint recently to discuss how sex inspired Slave Play's instantly iconic mirror design and why it was necessary to link the audience to the play's plantation.

Tell me, Clint, what were the early conversations like between yourself, playwright Jeremy O. Harris, and director Robert O’Hara?
So, in the very beginning, part of the discussion was how do we do this? Jeremy wanted it to be grounded in some sort of naturalism and Robert’s ideal setting for it would have been in the round. He wanted everybody to be watching multiple things, the play and each other. So, we had more conversations and I was thinking how I could marry these ideas and over time it evolved into this idea. Part of the design you see now came out of that desire—Jeremy wanted to put the audience in a plantation and Robert’s idea of being conscious of watching other people watch the show. A lot of the spaces, including New York Theatre Workshop, were proscenium houses, so the thing I needed to craft was how do I get those two things that they wanted, and I think the mirrors gave us that illusion. Manipulating the reflection made the design limber enough to accommodate everyone’s desire.


That leads me into my next question; I want to know how did the concept of the mirrors come about?
Yes, it came out of the desire to be in the round, but it literally came out of this research I had done. I love to do research, and a part of the research I had done was related to Act II when these social scientists are watching people have sex. How do we watch sexual acts? So, I was inspired by those glass windows in Amsterdam, stills of pornography, and what couples do when in their private bedrooms with mirrors on the ceilings. The genius of the mirrors was watching a sexual act being performed and observed. For me, it clicked. Let’s just do a whole wall of mirrors that face the audience and the audience can watch the actors and watch themselves—it’s a reflection in so many ways.

Then the next problem was how do I put them all in a plantation without putting them in a giant plantation? But with the mirrors you never see it, you just see yourself belonging to it.


Yes, it dawned on me upon a second viewing that the MacGregor House is reflected back at us the whole time and that the predominantly white Broadway audience is part of this—we are one with it. Was that a statement you were deliberately making?
Oh yes! It was very, very conscious. I think, whether we like it or not, we know who the make-up of the theatre is and that knowledge and statistical fact was a necessary tool in the design. Having the audience ultimately belong to the plantation—whether they like it or not. In a lot of discussions about race in America, especially for white folks, is that they are so many generations removed from that original sin, a lot of white people feel removed from it. We are not directly responsible it but it’s the legacy of this country. So, we said, let’s just assume every American carries this baggage—it’s a shared history. But the original intention was that whatever image was reflected back to the audience, it is an assumption that the audience belongs in that space. You couldn’t separate the audience from the plantation.


What was the biggest challenge for you in designing Slave Play?
I thought a lot about how do we vary one act from the other? By the mirrors moving and pivoting, it became more like watching action in a colosseum. Without physically moving the audience, but just the reflection of the audience it, we could actually change the seating arrangement of the theatre.

The thing to me that was the biggest challenge was finding the right materials for the mirror. Because glass is so dangerous and heavy, we had to find something that could withstand eight shows and a very physical production—people are being thrown against these walls—and not have it scratch so it’s pristine every night. There’s actually four different kinds of mirror onstage. The mirrors the actors have contact with are tempered glass. The panels that move up above are a lighter material that’s not glass, more like a stretch foil.


Hurry to Broadway’s Golden Theatre before January 19 to see how Clint Ramos’ design in Slave Play on Broadway.