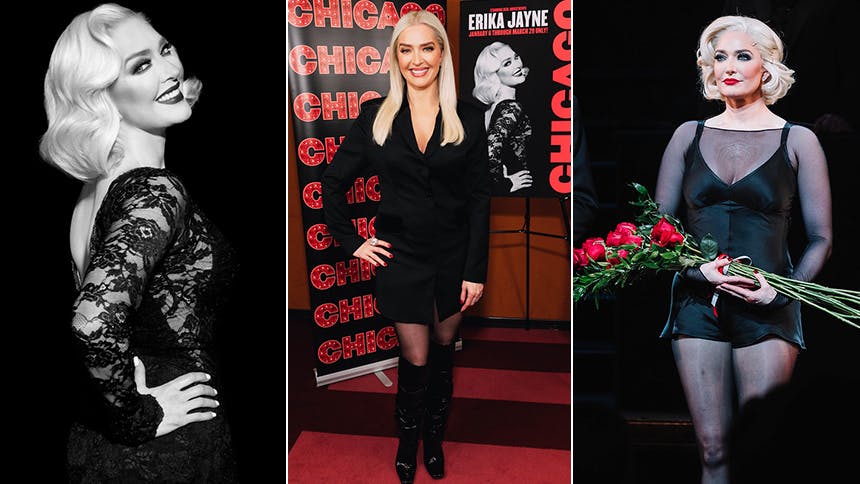 Erika Jayne brings plenty of star quality and dance skill to the role of Roxie Hart in Broadway's iconic, Tony-winning revival of Chicago

. The Billboard-charting singer and reality star (best known as the puss-patting ice queen of Bravo's The Real Housewives of Beverly Hills and for her time on Dancing with the Stars) makes her Broadway debut as Roxie, and she is absolute perfection. Catch her at Broadway's Ambassador Theatre through March 29.


BroadwayBox recently caught up with the lovely and radiant Erika to discuss why Chicago is the most important thing she's done, dealing with Housewives fame, and juggling RHOBH and her Broadway debut.

1. What does it mean to you to come to Broadway? Was this a bucket list dream for you?
I think it is always on everyone’s bucket list. I think that this is probably the most important thing I’ve ever done creatively.

2. How has it been juggling filming the tail end of The Real Housewives of Beverly Hills season 10 and preparing for your Broadway debut? Did Lisa Rinna give you any advice as a former Roxie?
I call or text with Rinna every day and we exchange information. First off, everyone at Chicago loves Rinna and Harry and immediately told me to tell them hello. But yes, I ask her all kinds of questions. It’s interesting juggling a reality TV show and trying to prepare and learn as much as I could for Roxie.

4. What’s the one down side of TV fame? How do you deal with it?
Oh, I’m not that famous! [Laughs] Yes, I have a very small fame compared to some people. I think it’s great. The other day I was walking to rehearsal and these ladies came up and said, “Erika! Erika! I just wanted to say hi.” And I said, “Thank you.” In that way, it’s great. I like when people come up and say we love watching the show or enjoy you on the show.
Did it take a while to get used to be GIFed all the time?
That part’s fun. When you’ve been GIFed, you know you made an impact.

5. Like Roxie Hart, you had a dream of creating Erika Jayne from Erika Girardi and you made that happen for yourself. What advice would you give to fans who admire you but are too afraid to make the leap in their own lives?
I think anything is possible—especially now—but nothing will happen if you don’t pull yourself up and have the courage to really fail, to be misunderstood, to be laughed at, and to persevere. You really have to persevere.

Don't miss Erika Jayne as Roxie Hart in 'Chicago' at the Ambassador Theatre through March 29, 2020.