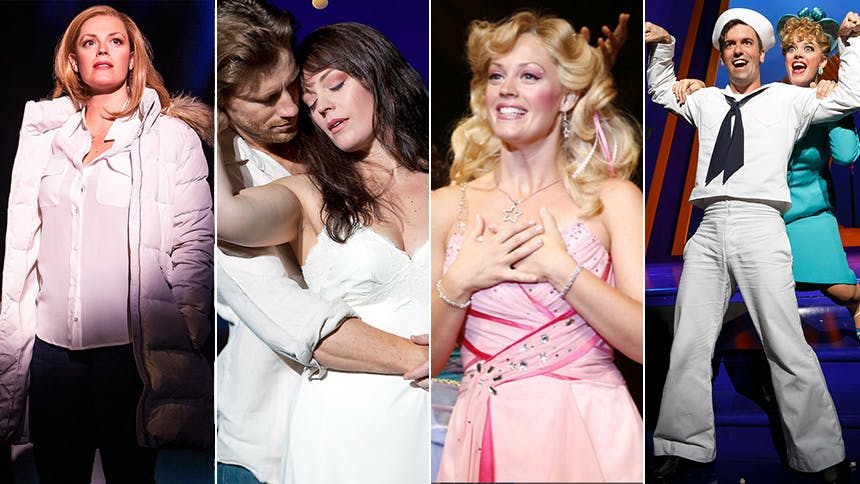 . Featuring the music of Grammy winner Alanis Morrissette and an original book by Diablo Cody, Jagged is a treat for anyone who grew up screaming along to that iconic album—in large part due to the central performance of Elizabeth Stanley. Her Act I finale of “Forgiven” and her Act II showstopper “Uninvited” each leave audiences stunned. Scroll on as we look back on Elizabeth Stanley’s resume one YouTube video at a time.

Elizabeth’s breakout came playing April in John Doyle’s Tony Award-winning revival of Company. She originated the role in the musical’s try-out at The Cincinnati Playhouse in the Park and made her Broadway debut in 2006 when the production transferred the Barrymore Theatre.


Next followed in the footsteps of Marilyn Monroe and Carol Channing, starring as Lorelei Lee in the Gateway Playhouse’s 2007 production of Gentlemen Prefer Blondes.


In 2008, she returned to Broadway leading the stage musical adaptation of the cult John Waters film Cry-Baby. She starred as Allison opposite James Snyder’s Wade "Cry-Baby" Walker. Despite its brief run on Broadway, the show received Best Musical, Best Score, and Best Book nominations at the 2008 Tony Awards.

Later in 2008, she embarked on the national tour of the Tony-nominated musical adaptation of the film Xanadu. Elizabeth strapped on her skates to star as Clio/Kira, the role made infamous on film by Olivia Newton-John, opposite Max Von Essen as Sonny.


In 2009, Elizabeth took a break from the musicals and starred as Constanze Weber in the Repertory Theatre of St. Louis production of Amadeus. Her performance earned her a Kevin Kline Award nomination for Outstanding Supporting Actress in a Play.


Elizabeth was back on Broadway in 2010 originating the role of Elvis’ singer girlfriend, Dyanne, in the Tony-nominated Best Musical Million Dollar Quartet. She’s serving a brunette moment here, just in case you’re confused.


In the spring of 2011, she co-starred as The Nurse in Transport Group’s intimate revival of Michael John LaChiusa’s Hello Again.

Photo by Courtesy of Transport Group


Later that year, she starred as Lucy in the Pittsburgh CLO production of Jekyll & Hyde. In the video below, there’s a little “Bring on the Men” but it’s all about the “Someone Like You” beginning at 1:51. I only wish we could have heard her do “A New Life”.


Fans of Sondheim’s cult musical Merrily We Roll Along instantly recall her performance as Gussie Carnegie in the star-studded Encores! production in 2012. That Act II opening was everything, as was her “The Blob”—thank goodness there’s a cast album.


In 2013, Elizabeth first played Claire Deloone in the Barrington Stage Company production of On the Town, but we’ll cover that when it transfers to Broadway. Between the Barrington premiere of OTT and the Broadway transfer in 2014, Elizabeth kept wildly busy. Here’s a look at just some of what she did that year: first, she took on another Marilyn role and headlined Music Circus’ production of Sugar (Aka Some Like It Hot as a musical); then she returned to Barrington to star as Lilli/Katharine in Kiss Me, Kate; then she starred as Grizabella and Lady of the Lake in the Pittsburgh CLO productions of Cats and Spamalot. Check out a glimpse of each below—the “Memory” begins 60 seconds into the Cats video!


Now we’re in 2014 and On the Town arrives on Broadway! The Tony-nominated musical made a big splash in town, winning rave reviews and loads of fans. For her zany performance as Claire, Elizabeth is nominated for a Drama Desk Award.

After On the Town ended in 2015, Elizabeth hit the road once again, this time leading Jason Robert Brown’s The Bridges of Madison County as Francesca Johnson.


In 2017, Elizabeth starred as Mother in Barrington Stage Company’s Ragtime and as The First Lady in Signature Theatre Company’s revival of Suzan-Lori Parks’ Fucking A off-Broadway.