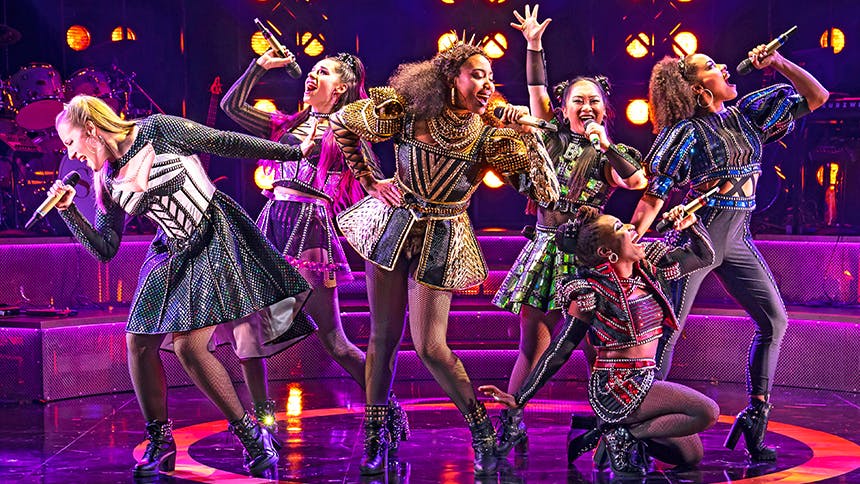 begins performances at the Brooks Atkinson Theatre in less than a month, so it’s crunch time. What began as a student show at the Edinburgh Fringe Festival has become an international sensation (playing London, Australia, Chicago, Boston, and now Broadway). The pop-concert-style musical tells the story of Henry VIII's six wives, with each wife embodying the sound of a different pop diva (Lily Allen, Ariana Grande, Britney, Adele). Now the album is killer front to back—do yourself a favor and dive in—but if you just want a sample of Six, here are three songs you'll soon find yourself obsessed with.


A good introduction to the score might be through Henry’s most infamous wife, Anne Boleyn. Everyone knows the story of Anne: she seduced a married king, became queen, her marriage spawned the Church of England, she was mother to Queen Elizabeth I, and she died by beheading. Her number takes you through this whole biography in the early style of Lily Allen. Here is the UK cast (album version above & live TV edit below), and on Broadway it will be performed by Andrea Macasaet.


The bop to end all Broadway bops. This song tells the story of Anna of Cleves, Henry’s fourth wife. Her story reads a bit like the original catfish. Henry chose her to be his bride based on a portrait (and for religious political gain) and was disappointed upon her arrival. Their unconsummated marriage lasted six months before annulment, and the two remained on unusually friendly terms after. Now, get ready to break it down to “Get Down”, inspired in part by Rihanna and Nicki Minaj. Again, here is the UK cast (album version above & West End Live performance below), and on Broadway it will be performed by Brittney Mack.


This is actually the opening number from the show, but I stand by this order of introduction. It’s a poppy tune perfect to open the show and set the scene for what’s to come as you meet each wife and get just the briefest of bios. You know the drill by now—UK cast album above and the Olivier performance below.