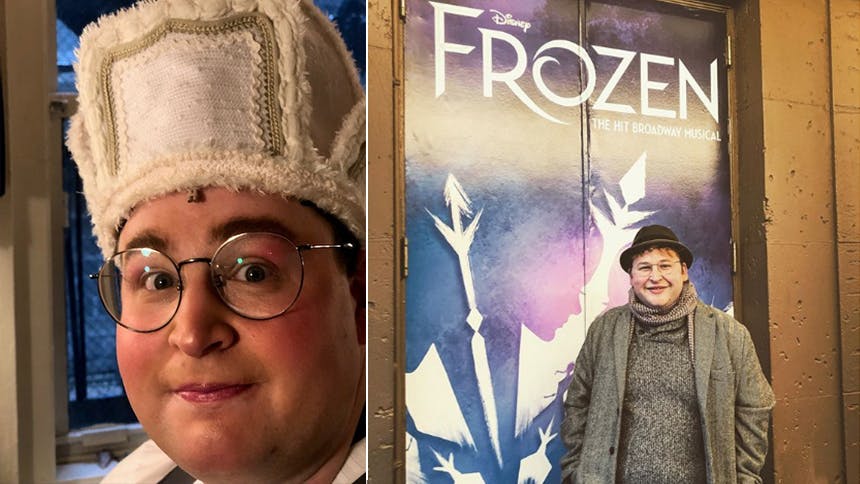 Chad Burris makes his Broadway debut as Olaf, the snowman who warms everyone’s heart, in the Disney hit musical Frozen

. Chad temporarily replaces Ryann Redmond, who returns from medical leave on February 18, 2020. Before clowning around in Arendelle, Chad starred as Elder Cunningham on The Book of Mormon tour, Elder Shumway in off-Broadway's The Book of Merman, and Vic in the recent world premiere adaptation of Almost Famous. BroadwayBox gets to know Chad a bit better below as he talks joining Frozen, growing up a theatre nerd, and creating content for himself.

1. What was your reaction when you found out you’d make your Broadway debut as Olaf in Frozen?
I received a text from my agent that said, “You have been offered Frozen on Broadway. This is not a drill.” I was so unbelievably thrilled, but at the same time was like… am I being pranked? I ran around my parents’ house screaming before I could even formulate my thoughts to tell them the news. It was so surreal.

2. What’s it been like to learn to move with the fabulous Olaf puppet? Do you feel like one now?
Learning to use the Olaf puppet is incredibly fun and challenging. I worked with the amazing movement coach, Lorenzo Pisoni, and resident director, Timothy Koch, who really pushed me to find the specificity in the movement with the puppet and how to bring him to life. And yes, you do feel like one. Olaf becomes your little buddy.

4. How did you come into musical theatre? Were you a theatre kid in Arkansas?
When I was in the fourth grade, I was getting in trouble for talking a lot. My parents found out about a youth theatre and thought it might be a good use of my big imagination. I’ve been in love with it ever since. I did a lot of shows with that youth program, Young Actors Guild, and was active in the International Thespian Society at the school and state level. I was and still am a theatre nerd for sure.

6. What’s your most cherished memory of the Almost Famous world premiere?
My favorite memory from Almost Famous was during tech rehearsals. The whole company was sitting around and all of a sudden people just started jamming out. It was a beautiful moment to be sitting around together and seeing us literally living out a central theme of the musical—music is love.

7. Tell us a memorable audition story.
I have played William Barfee several times in Spelling Bee, and I decided to switch it up and sing “All By Myself” by Celine Dion as William Barfee. The whole creative team was shocked and were laughing uncontrollably. Yes, I booked it. Yes, there is a YouTube video.

8. What Disney movie was your Disney movie growing up? What did you love about it?
I really loved Aladdin. I think the thing that has always made me love Disney, even now, is the magic. No one tells a story like Disney. The music, spectacle, and story are always so brilliant. Also, I just really loved walking around my house as a little kid trying to mimic Robin Williams as the Genie.

9. What did you love about creating your webseries City Boyz and playing Trystan?
I created City Boyz with my good friend, Cory Stonebrook. City Boyz was so fun to create because in this business we are constantly waiting for an opportunity from someone else. Taking the reins and creating this series and making the rules ourselves is something I’m really proud of. Also, to have it feature some of our dearest friends in the theater community including Ali Stroker, Chris O’Neill, and Mary Stout. It was a dream come true.

10. What was your New Year’s resolution this year as we head into a new decade?
My resolution is say less, do more. I plan on creating more things in the coming year and putting out funny content into the world. Here’s to a creative 2020!

Hurry to Broadway’s St. James Theatre before February 16 to se Chad Burris as Olaf in ‘Frozen’.