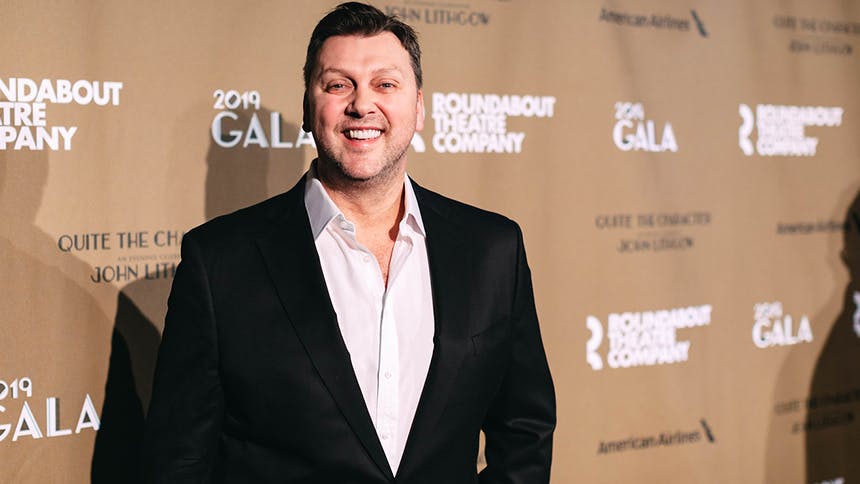 No one makes Broadway dance like Warren Carlyle. The Tony Award-winning choreographer has a gift for breathing new life into big Broadway revivals. His starry revivals alone include Follies, She Loves Me, Hello, Dolly!, The Mystery of Edwin Drood, On the Twentieth Century, Finian's Rainbow, and the upcoming revival of The Music Man with pal Hugh Jackman. Warren's latest revival is Roundabout Theatre Company's lush Kiss Me, Kate

at Studio 54. His work on the showstopper "Too Darn Hot" is absolutely electrifying and jaw-dropping.


BroadwayBox caught up with the director & choreographer of Broadway's After Midnight, Chaplin, A Tale of Two Cities, Finian's Rainbow and Hugh Jackman, Back on Broadway to discuss the dancers that inspire him, his dream revival, and his intense process on Kiss Me, Kate.

1. “Too Darn Hot” is arguably the most famous song in the show. What was the process like to create this moment? What were your goals for the number?
The process of creating the dances for this revival of Kiss Me, Kate was intense. I looked at and listened to every single note in the score and read the script over and over again. I gleaned as much information as I could before I even took a step. I did over a month of pre-production in the studio and had the incredible David Chase come in and do all new dance arrangements. I looked deeply at each musical moment and made it fresh. My mission in each sequence was to explore the ‘battle of the sexes’. The choreography in the show is very competitive and hopefully very sexy. “Too Darn Hot” was nothing but fun to create.

I worked on it for five days in pre-production and added dancers to try ideas out with as I grew the number.  My wish was to show dancers at rest and at play. Dancers always look their most beautiful when they are at rest. The dance takes place during intermission of the show. It’s lead by James T. Lane and was designed to be a playful competition between the sexes. I used live music on stage with the dancers because it is an element that inspires me. It makes me dance. I knew the dancers and the audiences would respond too. It’s a joyous explosion of dance, and, in my opinion, it’s musical theater dancing at its best. That was my wish.

2. What do you look for in a dancer? What dancers really inspire you?
I look for great rhythm, great technique, speed, long legs and a short body, and the ability to act through dance. Fearlessness and an ability to say yes, no matter what.  The company of Kiss Me, Kate have inspired, challenged, and supported me from day one. I am very inspired by them. I love them all.

My recent creation for New York City Ballet exposed me to some pretty extraordinary dancers and artists. I was inspired daily by their strength and beauty. Working with NYCB made me a better choreographer.

The dancer Karine Plantadit remains a constant source of inspiration for me.  In 2014, I made a solo for her in my Broadway show After Midnight. She has stayed very much in my life and in my imagination as I continue to dream and create dances. Karine has a freedom that I admire greatly. I have a specially commissioned sculpture of her on my piano at home. It reminds me to find joy in my work every day. Our collaboration was very meaningful.

4. What’s been the biggest pinch-me moment in your acclaimed career?
My first Tony nominations for After Midnight. I cried and cried and cried. That year, I staged and choreographed the entire Tony telecast for CBS, was nominated for the first time as Best Director of a Musical, was nominated for the first time as Best Choreographer of a musical, and won the 2014 tony award for Best Choreography. My dear friend Hugh Jackman was hosting the Tonys that year and I could hear him yelling backstage when I won. There is a very candid photo of Hugh and I backstage right after I won. I will be grateful for that honor and that moment forever.


5. You made your debut on Broadway as Susan Stroman’s associate choreographer on Oklahoma! and then worked with her on the stage and film adaptations of The Producers. What’s the most important and lasting thing you learned during that time?
I learned many, many things as Susan Stroman’s associate. The most lasting thing I learned from her was to always be prepared.

Kiss Me, Kate
Best Priced Tickets
Newer
8 Kiss Me, Kate Memes That are 100% Mood
Older
Will Broadway’s Beetlejuice Be the Most Stylish Show of the Season?