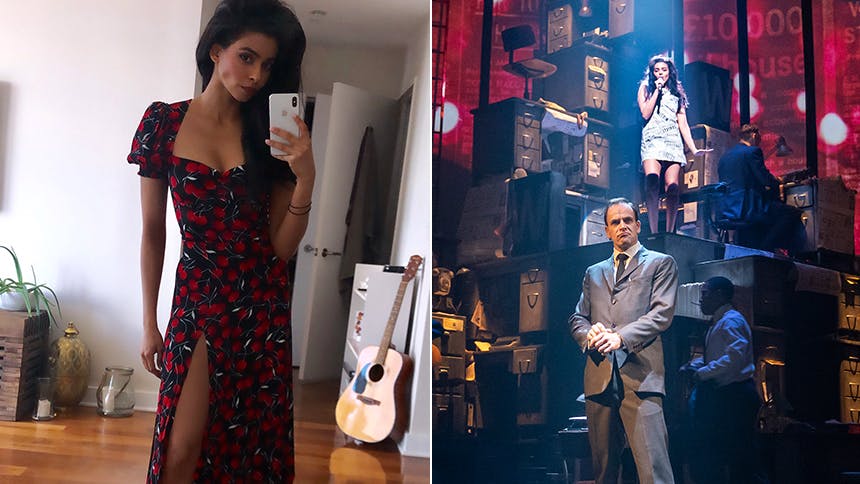 Rana Roy makes her Broadway debut as Stephanie Rahn (or as she's known today, Stephanie Marrian), the first ever Page 3 model to grace the pages of The Sun, in James Graham's Tony Award-nominated Best Play Ink

. The thrilling MTC production chronicles the first year Rupert Murdoch and Larry Lamb overhauled the tabloid The Sun in 1969 London, and Rana's character plays a crucial part in the paper's sink or swim success.

BroadwayBox caught up with the rising star (who currently co-stars on Facebook's pageant comedy Queen America) to learn about the unconventional way she booked her Broadway debut in Ink, the magic of sharing a TV set with Judith Light, and playing Stephanie Marrian as strong and not as a victim.

1. How is your Broadway debut different than what you expected or dreamt it to be?
Growing up in Dubai, United Arab Emirates, I didn’t ever think it would be a possibility for me to be on Broadway. So honestly, it was never a dream I had, since it felt so unattainable. Saying that, I truly don’t think I could be having a better experience. The cast, the play, the director, the writer, and everyone at MTC has made this such an incredible experience that I can’t believe I call this work!

2. How did you prepare to play Stephanie Rahn? What was important to you to bring to your performance?
I looked up everything the internet has to offer on Stephanie (Marrian is the last name she goes by). James Graham had also interviewed her, which he talked to me about. I wanted to make sure Stephanie wasn’t a stereotype. She can easily be seen as a victim in the play but I hate that word for her. Everyone’s perspective seemed to be that she was simply a victim, and that really rubbed me the wrong way. I wanted to make sure that, although she WAS used, she took ownership and she didn’t feel sorry for herself. It still hurts and she does realize she was just a pawn, but she also takes responsibility for her choices. I wanted to show her vulnerability and her strength.

3. Which moment in Ink brings you the most joy each night?
Ooo the whole thing! Haha but doing the “Headlines” number is a lot of fun and the scene I get to do with Jonny Lee Miller near the end always scares me, which is exciting.

4. You began your career as a dancer. How and why did you transition from dancer to actress? Do you still dance?
This is gonna sound cheesy, but I really just followed where life takes me. The transition happened unexpectedly. I was asked to audition for a TV series in England where they needed the lead actors to sing and dance; and for some reason they picked me. So, my first ever experience acting was on a TV show, where for a year I kept thinking, “When are they gonna realize they shouldn’t have hired me?!” I fell in love with acting and decided to keep going in that direction. Now I just dance for fun and for myself but if it ever came up for a role I would love to do it again.

5. What’s your tabloid of choice when you’re back in the UK?
I read the Metro most days, just because it was free on the underground, but I was never really a tabloid girl. Although I was very aware of The Sun and even knew girls in my dance school who wanted to be Page 3 models.

6. What is your favorite onset memory from Queen America?
Queen America was so much fun! It was great to have so many women involved. I loved seeing Meaghan Oppenheimer, a super-girly, young, incredibly-smart, beautiful, quirky, and kind woman run the show. There was one day in particular where Judith Light talked to a couple of us and shot inspiration and wisdom through every vein in our body. We had wrapped hours earlier but didn’t want to leave because of the amazing experience we were having listening to her. She’s so wonderful.

7. You began your TV career as Lola on the British series Britannia High. Which moment do fans of the show still reference most to you?
I love all the Britannia High fans so much—can’t believe it was 11 years ago now. Having people reach out and tell us how much they love the show, and that they’re still listening to the music makes my heart so warm. It was where I had to learn, in front of everyone watching, how to act, so the show really means a lot to me.

8. Tell us a memorable audition story.
My audition for Ink is definitely a memorable one. This is a huge confession, but I had never done a play before. I couldn’t even get my foot in the door for theatre auditions but had been telling my reps it’s something I really wanted to do for a long time. I read Ink and knew I had to play Stephanie. When I went in for Rupert Goold, I knew he liked what I did; however, he asked me if I’d had any theatrical stage experience and I said, “....Noooo.” We all laughed but when I left I realized that I had never mentioned all my stage experience as a dancer and singer, which is extensive. Why would they hire me without knowing about my experience or my training? I’m too much of a risk. I was in LA when I got a phone call saying that they liked me but they WERE worried about my experience and they wanted me to tape another scene. I did it. And then decided to send them a tape of me talking to camera about why I think I can do this. I knew what I was doing was not traditional—and likely could be a bad idea—but I just trusted my gut and literally fought for the part. Luckily for me it worked out :)

9. Which credit of yours has taught you the most about who you are as a performer?
I did a show called Underground, which challenged me in a way that other roles prior had not. I’ve always wanted to do a period piece but being Arab and Indian that opportunity seemed slim. Being able to play such a cool character in a great period show was a dream come true. It made me realize and believe I could strive for more. Another one would be Ink! There is nothing like being on stage every day. Failing in front of people and having to keep going, it challenges, and pushes, and helps you grow in a way like nothing else can.

10. What’s your favorite way to come down and unwind after a show?
I usually call one of my best friends, Matthew James Thomas, Dina Shihabi or May Calamawy (who are all in different time zones to me) and chat with them. Or a TV episode/movie with popcorn in bed.