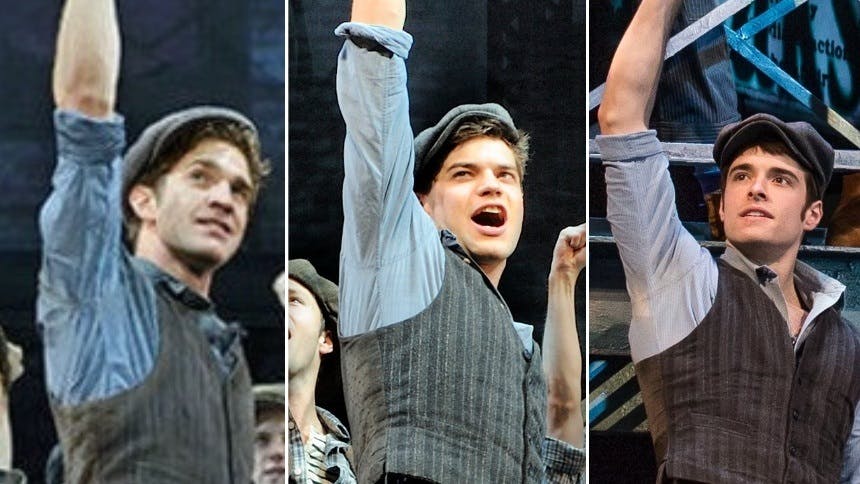 We love a big Broadway Act One Finale and it's time to spiral with our marvelous "Act One Finales" series here at BroadwayBox! You might find performances from productions, your favorite cabaret venue, benefits, you name it! We want to celebrate those incredible numbers that leave you breathlessly wanting more right before the intermission lights come up.

Act One Finale: "Santa Fe" from Newsies The Musical, by Alan Menken and Jack Feldman

Our passionate lead character Jack Kelly of the Disney On Broadway musical Newsies has a dream of escaping the streets selling "papes" and running off to Santa Fe. It's a place he's never been but it's a dreamland to him and a change of scenery.

So many talented theater stars seized the day performing this outstanding anthem. We're highlighting 10 of our favorites and "The World Will Know!"


Ok. We know the song is going to be dazzling but Jeremy's banter before the song makes the performance even more special! Then that effortless last "Santa Fe!"


We've made no secret that we think Dan DeLuca is fabulous. His Jack Kelly is so hopeful and endearing. He's got this Broadway pop voice that's magic on this song.


A Bronx Tale alum Adam Kaplan also performed in the show on Broadway covering the role of Jack Kelly. His smooth tenor sounds awesome on the tune.


Let's hear it for Salome! Salome who played Crystal, one of the original Urchins, in the recent Off-Broadway revival of Little Shop of Horrors gave a glorious performance of this Newsies tune. That powerful ending!


Jagged Little Pill's Cipriano performs a thoughtful and passionate rendition of the Newsies anthem. 2:24 to the end is so good!


How soon is too soon for a revival? Andrew most recently of Dear Evan Hansen not only gives a masterful performance of the song but he's accompanying himself on the piano. The riffs at the end? Beyond.


Casey is a Jimmy Award finalist from 2019 and his performance is so great! We really love his acting choices 1:31 to the end.


We wish this was the whole song but man oh man does Jay sound great on this! His "save my place, I'll be there!"


The wonderful Tarzan star delivers a stirring rendition of this song IN Walt Disney World! We love his honest storytelling throughout.