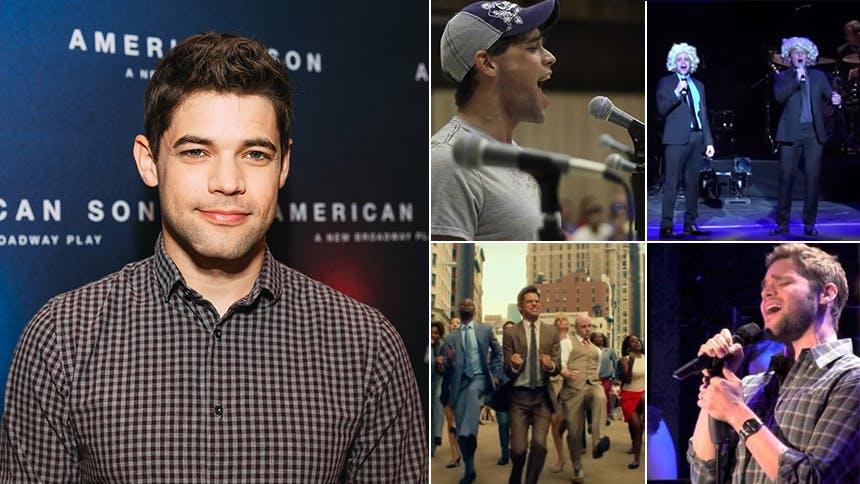 Tony nominee Jeremy Jordan wowed Broadway audiences in the musicals Newsies, West Side Story, Rock of Ages, and Bonnie and Clyde, and now the star of TV’s Supergirl and Smash makes his non-musical Broadway debut as Officer Paul Larkin in the powerful new drama American Son

, a timely look at the relationship between young African American men and the police.


BroadwayBox caught up with Jeremy (who takes the stage with Seth Rudetsky at NYC’s Town Hall on March 11) to look back on six very special YouTube videos and his amazing stories behind each.


Most of these Miscast performances are the brain child of [casting director and co-founder of MCC Theater] Bernie Telsey. He brought me on, and I think this was my first Miscast. I had just done Smash, and he thought it would be really funny to do “Let Me Be Your Star” but didn’t know who to do it with. We asked Jonathan. I took the higher harmonies. Jonathan really liked a couple of the lyrics from the Ivy Lynn perspective, so I was like, “Go for it, you can have it. I’ll take the other part.” Then we thought it would be funny to add wigs. We had one rehearsal and just improved the rest of the performance after that. We just threw it together and we were complete nuts about it. It was fun and silly.


I never even for the slightest moment thought this was going to get that big [5.1 million YouTube views]. My buddy Ben Rauhala puts these shows together and this was just another one—I had done a couple before. He wanted me to do that song, and I said, “Ok, whatever.” Then he said, “Can you do the seven-minute version?” And I was like, “No.” Then I said, “Fine, but I’m not learning the lyrics.” In the corner of the frame, there are lyrics that I am clearly reading off of the entire time—and, I might also add, getting a lot of it wrong. If you read the actual lyrics, you’d say “What is he doing?” The rest is just me making it up as I go along, like the part where I flirt with the background singers. I am just trying to fill the seven minutes and have fun with the audience. I’m not really sure why that went the way it did. People talk to me about this video all the time—it’s annoying. [Laughs] It’s funny because I have no emotional connection to that song whatsoever. I learned it the day before, I’m reading the lyrics off the sheet, and I’m being a goofball, and it becomes this iconic thing. I’ve only done it once again in my concert in London, and people went nuts. I don’t get it.


That was really exciting. Those days are always exciting in a show’s process—the day you get to hear the whole band for the very first time. We’d been rehearsing with just a piano for however many weeks, and this breathes new life into it. I had done a few [sitzprobes] before, but a lot of the kids in the show were making their Broadway debuts or it was their first show ever, so it was more exciting for me to watch everybody else go through the joy and the excitement of that process.

It’s still sinking in that [“Santa Fe”] is a signature song of mine. It’s so funny because every time I sing it, I find something new about it. It’s very much for that character, and when I did it in Newsies it was very much his song. The more you take it out of context, the more universal it becomes. I love it more as I get older, and it has a deeper meaning to somebody not in his early 20s who has a little bit more life. You can get something completely new out of leaving and going somewhere that’s completely unknown and exciting.


The Last Five Years came out right before I got to college so throughout college it was the show. It was just the thing; it was very beloved. If you could sing Last Five Years, you were ready to go to New York. I knew every word of every song even before I auditioned for the movie.

We filmed it over multiple days, and one of the big things about the movie is that we did everything live except for this song and one of her songs. We couldn’t sing live because we filmed at so many different locations, and it wouldn’t be seamless musically and the audio wouldn’t sync up—one outside, one in an elevator. A lot of it is pre-recorded, though they did end up using portions of live audio. It was really exciting. I love the tiniest little dance moment in it. It was tough trying to piece it all together for me. I love that song. For me, it’s one thing in the movie I wish I had more time with or could do over again, because I would really look at the whole song and each little moment to find its niche in the song a little more naturally. For me, it jumps a little bit too much in terms of my energy, but that’s just me being super judgmental on myself.


That’s the first time maybe ever that I’ve sung that song in the normal key—outside the recording we did for Smash. I do it in concerts a lot and in the context of doing 13 other songs in a concert, it’s a little too high. It pushes you a little too hard. It’s like, “Oh, I still have to do 12 other songs tonight. Maybe I should take this down a step or a half step.” But for Elsie Fest, since we were only doing four songs, we said, “Screw it! Let’s do it in the normal key.” It was fun to do it as it should be done. Elsie Fest as a whole was just a weird, crazy experience. It was a rock concert. People are standing and screaming and singing along. It was very exciting.


Listen, Bonnie and Clyde was the ultimate, beautiful, perfect experience that just faded away quicker than we ever wanted it to. We all loved each other so much doing that show and we all grew a lot—especially Laura [Osnes] and I. We got to create these interesting, exciting characters and paint them in a different light. It was the first time I ever played a real person, so there was research and figuring out where he came from and all the intricacies within him. It was the first time I felt I could help develop a show because it was really the first time I did an original character that I could build up from scratch. We had so many discussions about it. I really fell in love with that show, and it’s always going to have a special place in our hearts—at least, I know for Laura and I.