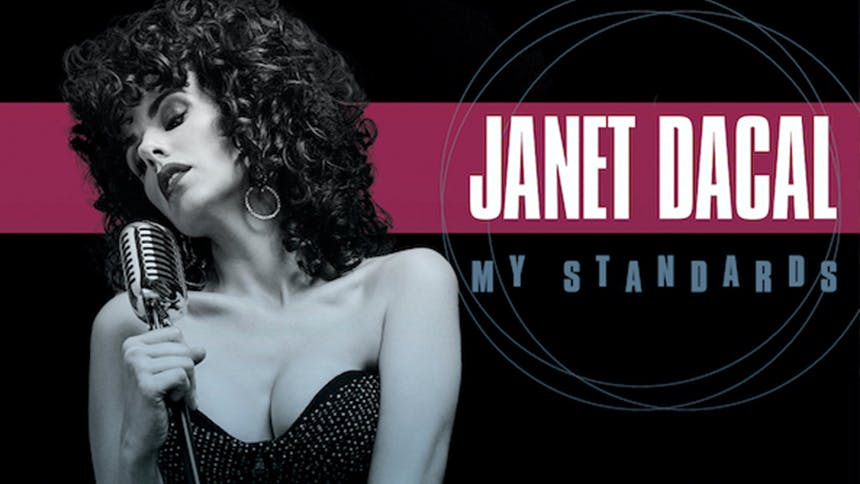 Janet Dacal is having a moment in 2020. Not only is she thrilling audiences around the country starring as Dina in the national tour of the Tony Award-winning Best Musical The Band’s Visit, in February Janet released her debut album My Standards

. Available now to stream through Ghostlight Records, My Standards is a collection of her favorite standards with a Cuban-American flair and features guest vocals by Olivia C. Dacal and Javier Muñoz.


Scroll on as the former star of Broadway’s In the Heights, Wonderland, and Prince of Broadway shares with us five albums that really rocked her world.

This voice is everything. Ella pulled me in and made me fall in love with singing. Her styling, her scatting and her swing, her sophisticated musical choices and ability, and then the sweetness in her voice...these are some of the many reasons I love Ella.  I pick the title song of the album to highlight on this one. Her interpretation of “A Tisket A Tasket” is playful, entertaining and just plain fun.

And she really is. For any Cuban, listening and dancing to Celia Cruz is as natural as breathing...and in my house growing up, my family was no exception. My earliest memories as a kid are filled with Celia’s joyful music playing in the background. My mom taught me to dance salsa, and I distinctly remember jamming with her to Celia’s tunes. Please listen to “Usted Abuso.” The breakdown at 3:12 is unlike any other.


Once On This Island—Original Broadway Cast Recording

Okay, by now you can see that I like music that makes my body move. I played Erzulie in my high school production of Once On This Island, and I instantly fell in love. This album is a joy bomb. Yes, it’s also heartbreaking, and this story is simple and beautiful, but this music is some of the happiest I have felt in my bones. It’s my go to album when I need a little pick-me-up. “Why We Tell The Story” —put on your happy shoes and turn it up.

Iconic.  My buddy Eli was a huge Fugees fan.  He would sit me down during our lunch breaks in 10th grade and have me listen to them on his gigantic headphones. Lauryn. When this album debuted, it consumed me. Her perspective on life and love told through rap and her killer vocals had this cd on loop in my portable cd player.  This album is one you should listen to from beginning to end because it’s that good. “To Zion”, a song written to her first born, makes me sing along every time…”beautiful, beautiful Zion.”

Though I had grown up listening to Salsa music because of my parents, this album gave a young generation of Latin kids permission to like salsa on their own. Jerry Rivera made Salsa cool. The summer this album dropped, I spent it dancing with my cousin Ferny in the under-age dance clubs of Miami. This album also reminds me of Lin-Manuel Miranda. Lin would regularly blast songs from this album at our In the Heights dance parties, and I was so surprised when I learned that I wasn’t the only In the Heights cast member who knew Jerry Rivera. If you’ve heard the trumpet solo to Shakira’s “Hips Don’t Lie”, it comes from Jerry Rivera’s “Amores Como El Nuestro”.


Download or stream Janet Dacal's My Standards album now, and check out her acclaimed performance in the tour of The Band's Visit near you.