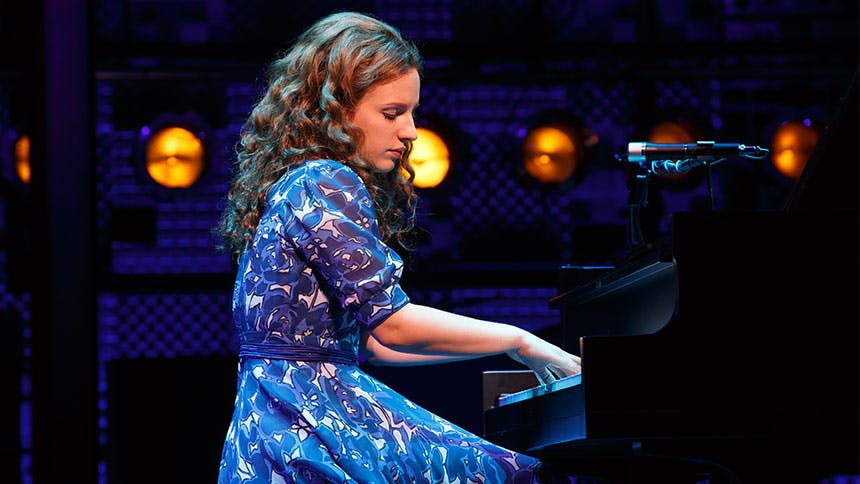 Jessie Mueller’s Broadway star is rising much like a fairy tale. She broke out in the short-lived revival of On a Clear Day You Can See Forever, snagging a Tony nomination, and she has been wowing New York audiences since (Into the Woods, The Mystery of Edwin Drood, Nice Work If You Can Get It, Carousel). Now, Mueller is headlining her first big Broadway musical, Beautiful: The Carole King Musical, and winning rave reviews from critics and audiences alike for performance as King. BroadwayBox caught up with Mueller (who is actually playing that piano in Beautiful, btw) to get the scoop on her Frozen dreams, all this Tony buzz and why she’s not on Twitter. 1. What Carole King song best describes who you are offstage? And why? Lately, it might be a song called "Sweet Seasons." I love the lyrics. It's all about trying to make the best of life, while hoping to make sense of it. 2. Your first Tony nomination you said took you by complete surprise, so what is it like for you now that everyone is talking about the awards you could win this season for playing Carole King?
It's extremely flattering. If it means people are struck by the show and being affected by it, then I'm thrilled. It's always wonderful to be recognized for something you've put your heart into. But focusing on it any more than that messes with my head. I've always found it a hard balance to strike. 3. If I had $15 million and said, “Jessie dream big,” what musical would you want to headline next?
Ha! Can my sister Abby and I do Frozen the Musical?! If Disney says 'no,' I'm goin' with Funny Girl. 4. What’s keeping you off Twitter and Instagram?
My soul. No seriously, I know myself well enough to know I'm not healthy with that kind of stuff. It makes me compare myself to others too much. I already spend too much time on numerous devices! It's a great marketing tool, I think it's just not for me. 5. You’ve said you’re a big Downton Abbey fan; if you could inject yourself into the show, who would your character be? Upstairs? Downstairs? How would she fit into the drama?
I would totally be a lady’s maid. I would not make the cut for upstairs. But the downstairs people are getting into trouble this season! I would have to keep my wits about me. That, or maybe sashay in with the new jazz craze, as an American singer.