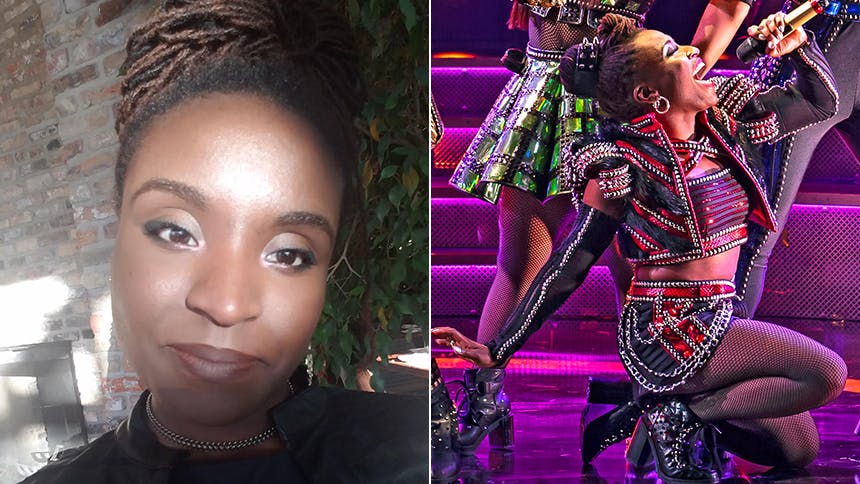 . The Chicago local, who previously appeared in off-Broadway's Black Nativity and the national tour of Memphis, makes her Broadway debut in the highly-anticipated production that has fans all over the world freaking out about King Henry VIII and his six wives. As Henry VIII's fourth wife, Anna of Cleves, Brittney stops the show with her anthem "Get Down". BroadwayBox gets to know Brittney a bit better below as she talks about landing her big Broadway debut, the Six queen group text, and why she wants to interview Audra McDonald.


1. How did Six happen for you? What was your journey originating Anna of Cleves in Chicago’s North American premiere to Broadway?
Six came out of nowhere. I was in Chicago (where I'm from) and it was the ninth audition of the day. I was beat but still buzzing. I love auditioning. So, I go in for Chicago Shakespeare Theatre's general call. Honestly, I was focused on The Wizard of Oz. I remember I sang a lot that day. Many callbacks later...next thing I know, I'm in NYC for another callback and I get the email that I booked it! I was a block away from the Brooks Atkinson Theatre when I nearly collapsed.

I remember I didn't know anything about Six, BUT I did know from the callback process it was going to be very special. And I would work my butt off to book it!

My journey with Anna of Cleves has been a very fun one. I knew that I didn’t want to play her in a conventional way. I wanted her to be lovable and impactful. So, I took her on a personal journey with me. And working with Lucy—and the trust she gave me to explore and give Cleves some flavor—is what helped propel her to her development now. I like to say Anna of Cleves is like having tacos for the first time. You just can't get enough.

2. What does it mean for you to be making your Broadway debut right now?
Wow! Um, it means that with continued prayer, hard work, and perseverance you can LITERALLY do anything. It means that being focused and having tunnel vision is not always a bad thing. It means that remembering that the only way I have made it this far is with an OUTSTANDING support system. It means ...but God.

3. What do you love about “Get Down”? What are you serving us in that showstopping moment?
What I love about "Get Down" is that it is actually an anthem. If you are ever feeling any kind of way, put it on—like freaking BLAST it, twice, back-to-back—and you will feel instantly better. It reminds us that WE ALL are our own royalty. Queens and Kings of our own castle, and once you get that embedded in your system, Baaaby, ain't NO stopping you! Cleves is serving you a whole life mood. She is reminding us that everyone's got an opinion and it's up to you to be affected by it. One of my favorite things to do is watch the audience's reaction to Anna of Cleves. 99% of the time they don't know how to take her (even if you know the music) then all of a sudden, she makes you smile. Then laugh and then she wins your heart!

4. What is it like being one of the six? Is there a group chat? Is it a sisterhood?
Funny thing is growing up I was one of six. My mama raised five children on her own. We were her tribe. She still is our Queen. So...this is easy. We set ground rules back in Chicago that we would respect each other as humans first. Then as women. So, it is really great. Yes, we all like each other for real, for real. We have a group chat and it is HILARIOUS! Our sisterhood is based off of the simple fact that we all are different people from different walks of life. We were given a very special gift and a great responsibility to tell these women's stories. No matter what kind of day we are having (as individuals or as a group) we do it together.

5. What’s your pre-show like? What do you listen to? Any rituals?
The only ritual I have is to make sure I laugh A LOT!! Anna of Cleves is a bucket of JOY, so I have to make sure I'm where she is. Joy is contagious so before you know it the other Queens are laughing too.

6. Which early role or experience put you on the path to performing professionally? When did you know this was it for you?
My mama exposed me to the arts very young. And all I know is, every time I came to her and said, "Mama, I wanna do..." or "Mama I wanna be...", she NEVER told me no. She always told me I could do or be anything/anyone. She guided me and never spared in words of encouragement. More than anything, she made sure I wanted it for myself. She never shielded me from our struggles as a family and made sure I was ready for my own struggles to come. She taught me how to pray and keep my mind on the Lord. And HERE I AM!

7. Tell us a memorable audition story.
My most memorable was when I was auditioning for—I forget what theatre—but I sneezed mid song. Started over and I sneezed again. I think I was allergic to the theatre. Sometimes you gotta take things as a sign...LOL.

8. If you could interview one artist you admire, who would you choose and why?
That's a very broad question...so to narrow it down one artist that has impacted my musical theatre career is Audra McDonald. I'd love to pick her brain about her experience as THE black female artist of her "season." I have so much to ask! Ugh!

9. Fans are obsessed with Six. What was the first musical you were obsessed with? What connected you to it?
Honestly, I have never been obsessed with any musical. There are so many musicals that I connect to for many different reasons. Seven Brides for Seven Brothers (the movie musical specifically)— I love the choreography. YENTL—it's PERFECT! Funny Face—Gold! You can’t go wrong with Fred and Audrey. Ragtime is a masterpiece. Once on this Island—REPRESENTATION MATTERS! I could go on...

10. What are three things you’d do if you were Queen for a day?
That's hard seeing as everything I'd want to do takes so much time...
-For that day, everyone would have a real break in the middle of the day—about 12:30 till about 3 PM—and still get off at 6.
- Put George Zimmermann behind bars!
-Erase student loans...somehow.