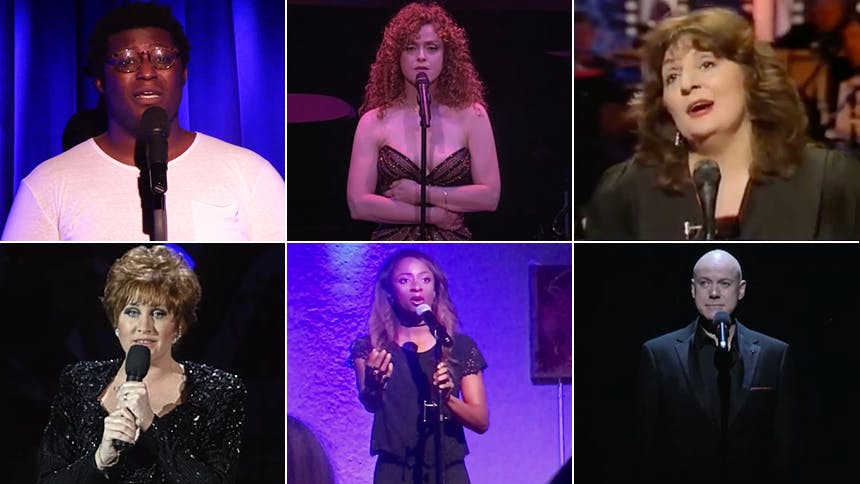 
Now we’ve already discussed the power of a good “Look What Happened to Mabel”, but what about the utter devastation of a proper “Time Heals Everything”? Scroll on as we flashback to seven of our favorite, most-depressing versions of Jerry Herman’s 11 o’clock Mack and Mabel heartbreaker, “Time Heals Everything”.


Broadway’s original, Tony-nominated Mabel, Bernadette Peters, is the queen of this number. She summons a deep pain and makes the audience feel it. There are several versions on YouTube of her performing this number, but none beats this one. The acting from 2:58-3:19 then the ending vocals. It’s the pinnicale.


Australian favorite Anthony Warlow performed this number as part of BCEFA’s Broadway Backwards. What’s great about this performance is that he’s in no rush to crush your spirit. He’s fooling us and himself in the beginning of the number, and then it just gets sadder. Brilliant.


Swedish star Helen Sjöholm is coming for Bernadette and Ruthie Henshall’s gig. First her “Someone Else’s Story” and now this?! She is absolutely heartbreaking, and there’s such power in her stillness. There’s also a desperation in it. This is a woman who has loved and lost.


British legend Georgia Brown lends her unique voice to the Jerry Herman tune, and she is landing every lyric. She is making choices. It’s very raw, and fresh, and angry.


The breakout star of A Strange Loop, Larry Owens is giving the children all the best breakup anthems right here. He starts with “Losing My Mind” from Follies and then goes into “Time Heals Everything” around 1:56. Haunting and heartbreaking. He holds nothing back.


I was not familiar with the Brooklyn based travel blogger, Danielle James (aka Danie Jae) before, but her performance is so incredibly captivating that it had to be included. She is taking her time with it, acting every beat. Can we talk about when she went from 2:15-2:20?


Singer and actress Lorna Luft inherited the gift of performing a torch song from her iconic mother, Judy Garland. She is serving a vocal here, and it’s beautiful but still painful. Lorna proves that all you need is a staircase and a follow spot to nail this number.

Don’t miss your chance to see Alexandra Socha perform the number in ‘Mack and Mabel’ at New York City Center.