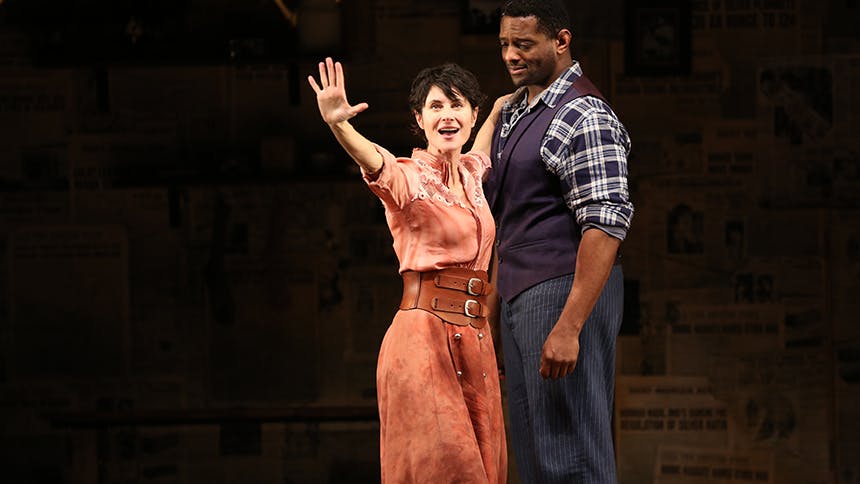 returns to New York for the first time since its Broadway premiere in 1960 with an exciting new production from the Transport Group. The classic Meredith Wilson musical about the rags to riches story of the Titanic hero has been revitalized for today’s audience with a new book and lyrics by Tony nominee Dick Scanlan. Tony Award winning director/choreographer Kathleen Marshall is at the helm, and headlining the musical is Tony Award nominee Beth Malone as Molly Brown. The must-see revival runs off-Broadway through April 5.

BroadwayBox recently caught up with Beth (Fun Home, Angels in America, Ring of Fire) to discuss her years-long journey with this production, her connection to Molly Brown, and creating a family at Fun Home.

1. You’ve been living in the world of Molly Brown and this musical since The Denver Center in 2014. Now it’s finally here in New York. What kept you attached to this project? What made you believe in this musical and this role for you?
I first did Molly Brown at the Denver Center in 2014. I'm from Colorado and hadn't been in the Denver theater scene for many years, but it is where I started—got my equity card at the Country Dinner Playhouse, which is now gone— so to get to go back and see all my old friends while playing Colorado icon Margaret Tobin Brown, was really a highlight of my career.

Dick Scanlan, Michael Rafter, and Kathleen Marshall's belief in me is truly what has kept me attached to the project for all these years. And I suppose, my own belief for many reasons, that I'm supposed to play this part.  Sometimes, I'm not even sure why, but I believe the ghosts of Golden Age Musical Theater have reached through time to tap me on the shoulder for this one.

2. How has your Molly Brown grown and evolved over time? How has your collaboration with Kathleen Marshall influenced your performance?
One of the reasons I believe I'm standing in Molly's boots is this: I have had a very clear idea of who Molly is and how to play her, and there was really only one way as far as my take on her. She just jumped off the page at me in a very specific way, and I've been doing that since my audition pretty much. But Kathleen is incredibly helpful in shaping that and asking the exact right question at the right time in the process. She'll look at a scene we've been working on for weeks with fresh eyes one day and just when you're ready to make that leap to a deeper place with it. It's uncanny.

3. What was creating your one-woman show Beth Malone: So Far like for you? Was it scary to do something so personal?
Making my solo show Beth Malone: So Far came at a time in my career when I was thinking of leaving the business, so I really had nothing to lose. I would write down these really honest, truthful monologues about my formative years and it just felt so good to tell the truth, it became addictive. But getting up and performing that for people...the idea of that was really terrifying. So, I had begun to think just writing it was enough, but after getting up and making myself do it in front of people a few times I began to get feedback that my honesty was really helpful for people. That made me accept that performing it was really the other half of creating it. You had to put the stories out there for people to do with what they will. It was quite an amazing process both personally and artistically. I learned a lot.

4. Looking back on your time with Fun Home, what’s your most cherished memory of that experience? What moment brings you joy just thinking about?
Fun Home spanned about five years of my life, if you count the first day I ever auditioned for the 29-hour reading to the final bow on Broadway. Of all of that time, the thing I cherish most is the backstage life we had and that family dynamic we developed. I have true, deep, forever friendships with that cast and you just can't put a value on that. We shared so many laughs and many cries too. I remember Judy Kuhn and I making moronic videos in our dressing room. I remember Cerveris' holding me as I sobbed after the Pulse Nightclub shooting. I remember a million silly, beautiful moments with Joel, Roberta, Lauren, Emily, all the incredible kids. When you have day to day existence with people over a long period of time you get this rare, lovely opportunity to know them and to be known.  I feel so lucky.

5. Between tech, previews, and all that goes into opening a musical in New York, you must be wildly busy. When you find that rare time for yourself, how are you spending it?
When I have a free day, which is amazingly rare right this second, I of course love to spend it with my wife and dog.  Today we went down the rabbit hole on YouTube watching people build their own Tiny Houses to live off the grid. How gay is that?