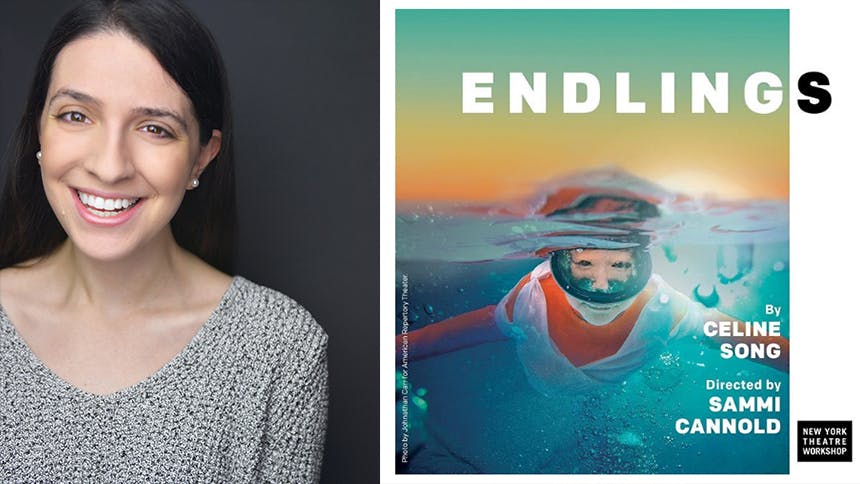 Director Sammi Cannold is a rising star in New York. The young Harvard alum gained attention and acclaim for her inventive, site-specific revivals; she worked as an associate director with Tony-winning visionaries Diane Paulus and Rachel Chavkin; and this past fall her striking revival of Evita at New York City Center was the talk of the town. Now, Sammi brings Celine Song’s new play Endlings

to off-Broadway's New York Theatre Workshop. Sammi helmed Endlings' world premiere American Repertory Theater and worked to develop it at Playwrights Realm and the Eugene O’Neill Theater Center. BroadwayBox recently caught up with Sammi to talk about immersing herself in the world of Endlings, bringing back her Ragtime on Ellis Island, and realizing her dream for Evita.

1. You’ve been with this project since 2017. What’s been the most illuminating piece of research you’ve done to bring you into this world of the haenyeos of Korea?
I've adored the process of developing this project. The most illuminating research I've done by far was in Korea on Jeju Island, where 4,000 of the 6,000 haenyeo still deep-sea-diving live. The executive producer at the A.R.T., Diane Borger, and I went there for a week in November of 2018, and we traveled around the country doing research, meeting haenyeo, watching them dive, going to museums, and more. On our last day, a group of haenyeo invited us to dinner at a small restaurant where they cooked their catch from that day—they then took us to what is essentially their diving locker-room and gave us three of their old diving suits to bring back for our production. We've hung them on the set in both productions of the play.

2. You have an ocean onstage in Endlings. What were the early conversations like to make that happen?
On the very last page of the Endling script, Celine Song (our genius playwright) includes links to a few YouTube videos with underwater footage of haenyeos swimming and diving. I watched these videos right after reading the play and was immediately so taken by the virtuosity and athleticism of these extraordinary women. If we were really to pay homage to them in a theatrical adaptation of their lives, it felt essential to capture that virtuosity and athleticism in some profound way. So, the first time that Celine and I met, I said, 'So, there's going to be a massive aquarium tank on stage, right?' And she replied, 'I don't know if there's a theater that's going to let us do that.' Ultimately, she and I have been so exceptionally fortunate to get to work at not just one, but two theaters that are letting us (and our heroic design team) do that with flying colors.

3. What excites you about site specific shows, like your Ragtime and Violet? Is there a site-specific dream project you’d love to explore?
I'm so endlessly excited by how when you marry the right story with the right site, one can add meaning to the other and vice versa. I also think that giving the audience a role to play without necessarily forcing their participation is deeply exciting—i.e. when you put Violet on a bus, the audience members become Violet's fellow passengers going on her journey with her simply by virtue of sharing the same (moving) space. In terms of a site-specific dream project, I'd very much love to do a full production of Ragtime on Ellis Island, which is hopefully not far off—when we did the show in 2016, it was a concert version for one night, but it's my ultimate dream to provide an opportunity for more folks to see it and to fully realize the world of the show on the island.

4. Which play or musical rocked your world when you were coming up as a directing student?
I'm going to cheat, because there were three and I'm having a hard time choosing, but I'll be brief. The 2012 revival of Evita, because it introduced me to a story that I was dying to tell in my own way and I knew I had to pursue directing to tell it. The 2013 revival of Pippin, because the night I went, I got to meet Diane Paulus for the first time and understanding that the vision for that production had come from that woman was so critical in my understanding of what it might mean to become a director. And then Natasha, Pierre & the Great Comet of 1812, because that show and Rachel Chavkin fundamentally changed my understanding of what commercial theater could be long before I had the honor of becoming the show's associate director.

5. I loved your Evita at City Center. What was the experience like to revisit your college thesis and produce it as a high-profile revival for New York audiences? And looking back, which element are you most proud of?
Thank you so much! It's interesting, because the production at City Center ended up being very different from the production I directed in college, even though I started from a similar place. Both shared a desire to defend Eva in certain ways, but how they went about it was a different—we didn't have a young Eva in the first production for example. That said, certain elements made their way into the City Center production—my staging of "Art of the Possible" at City Center was 95% the same as when I did it in college, which made me chuckle a little every time we got to that number. I never would have guessed my junior year blocking diagrams would come in handy at New York City Center.

Looking back, I think I'm most proud of that company. The way that musicals at City Center work now, you have 10 days of rehearsal and 1.5 days of tech to bring them to life and the audience expects that they're fully staged, fully choreographed, and sung/played beautifully. I find a challenge like that to be exhilarating and I was so lucky to be surrounded by others who felt similarly and were more than up for the challenge.

I suppose the less general thing I'm most proud of is that a woman named María Eugenia Álvarez—who is now 92, but 71 years ago, served as Evita's nurse when she was dying of cancer—recorded our pre-show announcement for us. The words that start the musical "Eva Perón, spiritual leader of the nation entered immortality at 20:25 hours today" were originally said by María Eugenia on the day of Evita's death in 1952, so to have her send us a recording of herself saying those words for our production after we'd become close with her in Argentina felt like the greatest blessing we could ever hope for.