Choreographer Kelly Devine on Her Three Musicals Come From Away, Rock of Ages & Diana, Her Olivier Award, & Working with Lucy Hale for TV's Katy Keene 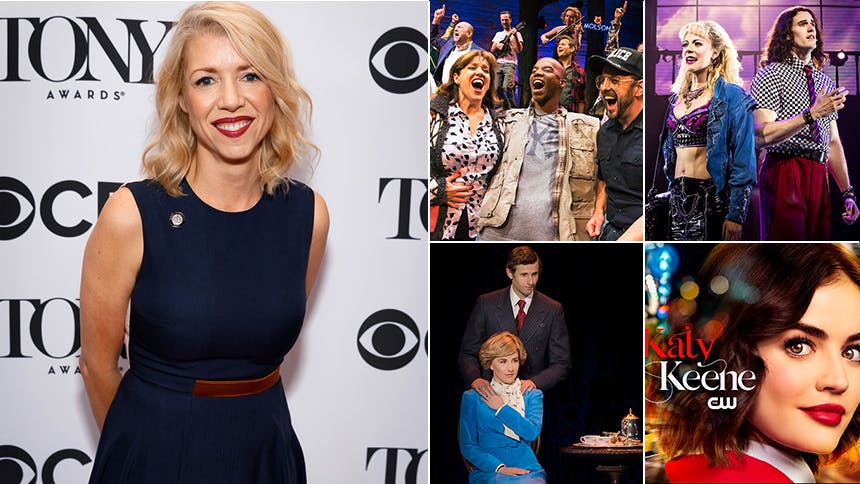 Two-time Tony Award nominee and Olivier-winning choreographer Kelly Devine is having a moment right now. Her hit musical Come From Away

prepares to enter its third year on Broadway; Rock of Ages is back off-Broadway for an open-ended run at New World Stages; Bob & Carol & Ted & Alice is exciting audiences at The New Group; and her new Broadway bio-musical Diana is about to begin performances on March 2. In addition to the four shows concurrently running in New York, Kelly’s work is featured on TV in the new CW series Katy Keene, starring Lucy Hale. (Yes, there’s an entire musical episode on the horizon!)


BroadwayBox caught up with Kelly to discuss all these projects: Lucy Hale on Broadway, the universal appeal of Come From Away, making her Rock of Ages dream happen 10 years later, and what to expect from the new Broadway musical Diana.

1. What did you enjoy about working with Lucy Hale on CW’s Katy Keene?
Lucy Hale is just a dream boat. She's so kind, and smart, and prepared, and brave, and just willing to try anything. She can show up at a 5:00 AM rehearsal with a coffee in her hand and a big smile, and we just start dancing. It's amazing. She really is just an impressive woman.
Do you think there’s Broadway in her future? Could she do live theater?
Absolutely. I'd love to build a show around her. She’s incredibly talented.


2. Where do you keep your Olivier Award?
I have a little buffet-like thing that's got some pictures and some little statues, and it's there. It's hanging out behind my couch.


3. You’ve opened Come From Away around the world. Why do you think the show continues to work wherever it goes?
I just think it's a time now where celebrating people's kindness is really important. It's also such a beautiful reminder that there are really good people in this world. We need to know that, because we all need each other, and it's a nice celebration of that.

It's so interesting too, because New Yorkers, obviously had a different response than the first responders in DC that came to see the show. Everyone has a different relationship to it, but the thing that I've heard from lots of audience members is, "Thank you for giving me a new relationship with such a horrific day."


4. What was it like to revisit Rock of Ages for the new off-Broadway run? Was there anything you were itching to go back and change when the opportunity presented itself?
Interesting you said that. Here’s the one big thing that happened with the 10-year Rock of Ages anniversary at New World Stages. I have forever wanted “Pour Some Sugar One Me” in [Rock of Ages]. Since 2006, I had been asking to get that song in the show. I feel like it's the quintessential rock ‘n’ roll female empowerment number, and we couldn't get the rights. They would not give us the rights. So, to go back to when we first started auditioning for this show, I used “Pour Some Sugar On Me” as the dance combination for the women—and it was never in the show. For 10 years, as I'm doing Rock of Ages, I just kept willing it out there. Finally, after all this time, they gave it to us. So, “Pour Some Sugar On Me” is in, and it's awesome. It was really, really fun to do.


5. What can expect from Diana? What is the world of this new musical? What is the vocabulary of the dance?
I will tell you this, it's not anything that anybody would expect. It really does have a very unique feel—it’s sort of like a rock opera.
Wow, really?
Sort of, yeah. It’s very much a pop/rock score. It's a love triangle between Camilla, and Charles, and Diana. It takes place from the time when Diana at 19 until the time that she wants to leave the marriage and leave the palace. It's really lovely humanizing way to see these people struggling in a really complicated situation—dealing with a monarchy and a country—and she literally changed the world.

My task, that I set for myself, was to make all of the choreography feel extremely original. I never want to repeat myself. I never want somebody see my work and say, "Oh, she does to the same steps." I tried to do something completely different, and pull from somewhere else for every song. There's an interesting take on a lot of the things that you'll see. The paparazzi play a big part, and they have a very specific thing I've given them. It's been a really exciting project to work on. This is a beautiful company, and I'm very excited.


6. Soon, you will have four musicals running at the same time in New York.  How you strike a work-life balance when you’re this busy?
It's so funny. I love work; I love my work; I love to work. I've always liked working hard, too. There's something really satisfying about rolling up my sleeves. I don't mind being a little tired from it because I feel so full from it all. I have great friends, and I just schedule time to turn off and to rest, or hang out, or just let my mind wander. You just schedule it. I drop into whatever I have to do at that moment, and I just stay present in that moment.

7. How do you refill your well creatively? Where do you go to recharge and find new inspiration?
It can be anything. Music is just the beginning—the way I feel about music, my relationship to music, the physicality that comes out of me with different kinds of music. Sometimes I'll just listen to new artists and play a lot of different music. New music always inspires me. I go to museums. I have a couple of the projects that I'm developing right now, because I'm really interested in creating my own content. As I'm storyboarding for those, I have to do a lot of scouring on the web for abstract pictures, and elements that I think would be interesting in whatever project I'm working on. I get a lot of inspiration from that. Architecture, fashion, textiles—I love all of that stuff. I'm a nerd like that.

See Kelly Devine’s work in Come From Away at the Schoenfeld Theatre, Rock of Ages at New World Stages, and (beginning March 2) Diana at the Longacre Theatre.

Come From Away
Discount up to $68