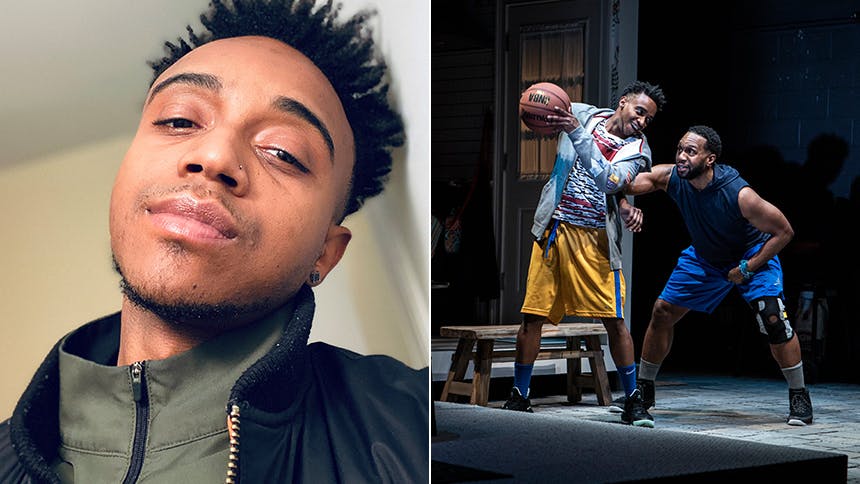 Newcomer Cecil Blutcher makes his off-Broadway debut in the breakout role of Everett/EJ in the world premiere of Olivier Award winner Katori Hall's new play The Hot Wing King at Signature Theatre. The play looks at the relationship between a black gay couple in Tennessee after their teenage nephew (Everett) unexpectedly joins their family.


BroadwayBox gets to know Cecil a bit better as he talks about making his dream debut in a Katori Hall play, his passion for music and his work as a musician, and growing up in Chicago.

1. What spoke to you most about The Hot Wing King and the character of EJ/Everett when you first read it?
For me, it was Everett‘s heart. From the first read, I could tell that he was going through so much that I almost wanted to reach through the page and give him a hug. Katori also did such an amazing job of building such a 3-D human, as she does with all of her characters. I couldn’t help but be drawn to the role.

2. What was your reaction when you found out you would make your off-Broadway debut in The Hot Wing King? Who was your first call?
I found out about this on a morning when I was on my way to work at the Apple Store (s/o Downtown BK). I was very excited, but also running kind of late. I was a few blocks away so I didn’t really have time to make any calls until later. But once I got to work, I did grab my friend/coworker who is a playwright and told him the news, because he was the only person around who I felt would understand how big a deal this was.

3. What put you on the path to performing? How did professional acting get on your radar?
When I was in high school, I was a hard-core athlete and had plans to continue pursuing sports through college all the way up until my senior year. What changed that trajectory was joining the Speech team. I discovered a way to combine my love for performing with my competitive nature/spirit, and I was fully in my element. I wound up earning a scholarship to compete in college last minute, and once that happened I decided I wasn’t going to play varsity sports during the 2nd half of my sr yr. After quitting the baseball team, I auditioned for the spring production and was cast as the lead. It was my first time auditioning for any of my HS productions, and after finishing the run my drama teacher said he was pissed that I hadn’t found him sooner. That’s when I realized I made the right choice.

4. Tell us a memorable audition story.
I got a DSLR camera two years ago and, I kid you not, the first audition I filmed with it wound up turning into my first guest star role on TV. So, it immediately paid for itself. I was at home with my family in Chicago and didn’t even have my tripod with me.

5. For people who will see you in this show and want to be introduced to your music, what’s the first song they should start with?
“Birthday Wishes”. It’s one of the songs I’ve written that really encapsulates what I think makes me tick as a songwriter. Very melodic, catchy hook, traditional rap with solid punch-lines, mixed with a more modern flow. I also sing a lot on it. The song touches on universal themes of dream-chasing, sacrifice, and motivation. I wrote that song a few years ago. If they hear that, they should then go listen to “Before September” to get a feel for my growth. I think I’m a bit ‘Boppier’ in my songwriting these days.

6. Who were your musical idols growing up? Who did you admire and want to be like?
Kanye West, Michael Jackson, Kirk Franklin, Lil Wayne, Jay Z. In a perfect world, I would love to be able to conceptualize ideas like Kanye, perform on stage like Michael, construct compositions like Kirk Franklin, play with words like Lil Wayne, and flow with charisma/bravado like Jay Z.

7. What do you love about being a member of Ensemble Studio Theater? How has it shaped you as a performer?
EST gave me a home and an artistic space to grow in a city that can feel very isolating. I’ve grown as a performer but more importantly I’ve grown in my ability to collaborate on new work. Through working at EST (and more specifically with the Youngblood Collective), I’m learning what it means to truly work in the service of a play and not the other way around. Huge shout out to Billy Carden, RJ Tolan, and Graeme Gillis (just to name a few) over there overseeing a beautiful operation that’s only going to continue to grow moving forward.

8. What do you miss most about your hometown of Chicago?
My family, Harold’s Chicken, Juking, and footworking. My best friend’s family also used to run a skating rink that was crazy lit on Saturday nights. Youth culture there is awesome.

9. What’s the most important thing Katori Hall said to you that influenced your performance as EJ?
She freed me from any desire to play him as a child. He’s been through so much in his short lifetime that he’s very much an adult already in many ways. There are many things that we can learn from him as adults. He’s unique in the sense that most kids are pushing to grow up faster but I feel like he’s somebody who had to grow up way too fast and would like to reverse that process a bit before things get out of hand. He’s a very wise soul.

10. You posted a video on Instagram recently of leaving your full-time day job to do this play. What does this opportunity mean for you?
This opportunity means the world to me. In college, competing in forensics competition (Speech and Debate), I used to cut Katori’s plays into 10 minute performances purely off of my admiration for her as a writer and the depth of the characters she creates. To flash forward less than 10 years and to be working with her as a collaborator is something that I’m honestly still trying to wrap my head around. But I will say that I make it a point to thank God every day coming into work because it’s definitely a dream.