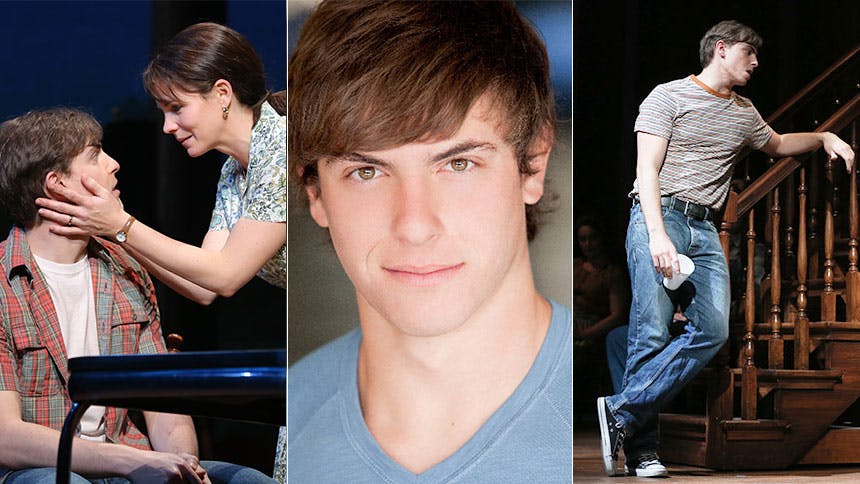 From Oz to Madison County, Derek Klena has had some year on Broadway. In the fall, he starred as Fiyero in the 10th anniversary cast of Wicked, and this spring, he appears as Kelli O’Hara and Hunter Foster's bright son, Michael Johnson, in the lush romantic musical The Bridges of Madison County. BroadwayBox caught up with the busy Broadway hunk to talk cry movies, JRB jam sessions & #Klendez.

1. Bridges gets so many people emotional. What’s your go-to cry movie?
Marley & Me. That’s a tearjerker. When the dog is on the hospital bed at the end and you know he’s going to be put down…that’s a tough scene.

2. What Jason Robert Brown song do you rock out to when you’re alone?
Probably “Old Red Hills of Home” from Parade. I feel like that whole opening sequence to the show is so powerful and there's so much to it. It’s become one of my favorite shows.

3. If you could take one trait from each of your onstage parents (Kelli O’Hara and Hunter Foster) what would you choose?
From Kelli O’Hara, being perfect in every way—I’d like to take that trait. In Hunter, being so versatile. He’s gotten to play so many different types of roles and he’s had an epic career, and that’s a gift. I’d like to pursue a career like that.

4. The #Klendez concert is coming up at 54 Below. What’s the next dream show you’d like to do together? Is there one hovering around?
Recently, we heard Frozen was being talked about, and we said, “Hey, let’s do that one.” [Laughs] It was so fun developing Dogfight, and it would be fun to someday create another musical together now that we have this friendship.

5. What’s your go-to Seamless order?
I’ve become very fond of Thai food, so either Room Service on 9th Avenue or Pure Thai. Those are my go-to. Plus, they make good leftovers, so it’s still great if you heat it up.