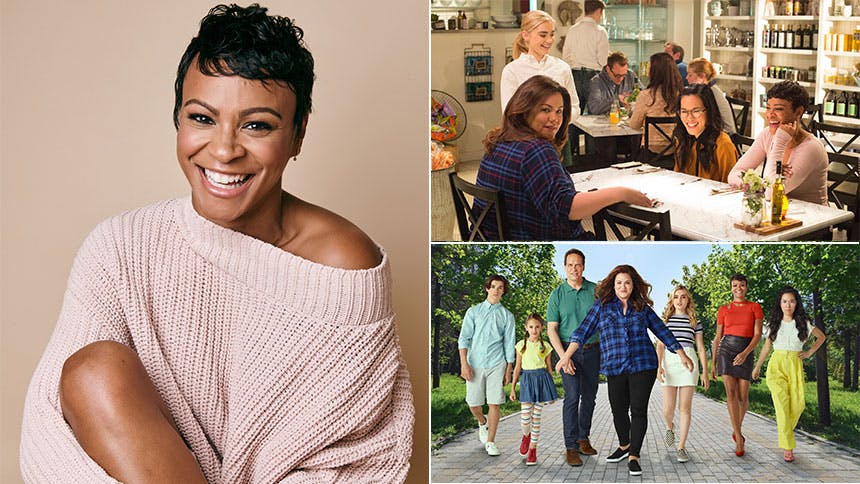 Carly Hughes co-stars on the hilarious ABC sitcom American Wife (you can binge the first three seasons on Hulu and watch season four live on Friday nights). Before making the leap to TV, Carly starred on Broadway as The Leading Player in Pippin, Velma Kelly in Chicago, and Lucille/Shirley in Beautiful: The Carole King Musical. She also appeared in Ghost, Ragtime, The Book of Mormon and Dr. Seuss' How the Grinch Stole Christmas.


BroadwayBox recently caught up with Carly to talk about making the leap from Broadway to TV, American Housewife fans, and the role that would bring her back to Broadway.

1. Angela is described on the ABC site as "a hip black lesbian". What does it mean for you to provide that kind of representation in a sitcom? Do you hear from women about what seeing Angela means to them?
I always say, I feel lucky to be able to embody this person on camera for the world to see. She's a single mom in Westport with two kids, she's a lawyer, she's wealthy, and she happens to be a lesbian. So I try to play her as a human being, and I think that keeps the honesty there.

I will say, I was at a charity event and this lesbian woman came up to me—knowing I was not a lesbian in real life—and said, "It means so much to see you on TV playing this character." It was one of the first times I was like, "Whoa, okay. Number one, that means I'm doing it right; and number two, how cool.” Because there are tons of instances in my own life where I had gone up to other women of color or strong women and told them, "Thank you for what you do because it has helped me," or "it gives me a spark of energy." But yeah, it means a lot.

2. That leads right into my next question. Which character or actor provided an important piece of representation for you growing up?
Growing up, for me it was definitely Phylicia Rashad. I looked up to her like crazy because I grew up watching The Cosby Show. But then the older I got, watching her performance and noticing how she stood out against all the rest.
Did you ever meet her?
I did meet her. She was directing a play in LA. I think she was directing Ma Rainey’s Black Bottom, and I met her then. And I met her in passing in New York, but either I got shy or just there was no time other than to say, "I think you're amazing," and keep walking—which sometimes is enough. But I've never been able to sit down and have that conversation with her of like, "Do you understand what you mean to me?"

It’s the same with her sister, Debbie Allen, as well. I've gotten to talk to Debbie Allen several times because she was dancing and doing everything I wanted to do—and as a lead and not just in the background.

3. So many performers on Broadway dream on landing a TV series. Going from Broadway to series regular, what was the biggest surprise about getting the dream gig?
The biggest surprise for me was the amount of times they call cut and action. And the amount of times you have to do the same line or the same scene. I'm not naive and I knew that, you do it from Angle-B. I knew all of that, but the amount of time surprised me. And then the other surprise was that it had nothing to do with me. It has to do with the angle and the lighting, and the footage that they got. Initially, you're like, "What? You want to be to do it again? What am I not doing?" And they're like, "Dude, you're fine. I just need to move this light." And you're like, "Oh. Oh, okay."

4. What was the biggest challenge for you coming up through the ranks on Broadway, from ensemble member to leading lady?
I mean honestly, the biggest challenge for me was patience and waiting for it to happen. Because I'd be like, "Okay, hello, I'm ready now. I'm ready, duh." And then when you’re there, you're number one, so you're leading that show. You have to deal with your problems and your issues in a different way than you do with the ensemble. When you're like, "I don't want to be here." You can't do that when you're the lead. You know? But I had been preparing forever. So I feel like, when it happened for me,, it was the right time to step into it. I was like, "Okay, yeah, I got this." Because you know, mama's been doing this for a long time.

Newer
A Look Back at the Tony Award-Winning Stage Career of The Sound Inside Star Mary-Louise Parker
Older
Hungry for More Derren Brown? Here Are Four Jaw-Dropping Videos to Watch After Seeing Him on Broadway
Sign up for BroadwayBox Discount Alerts