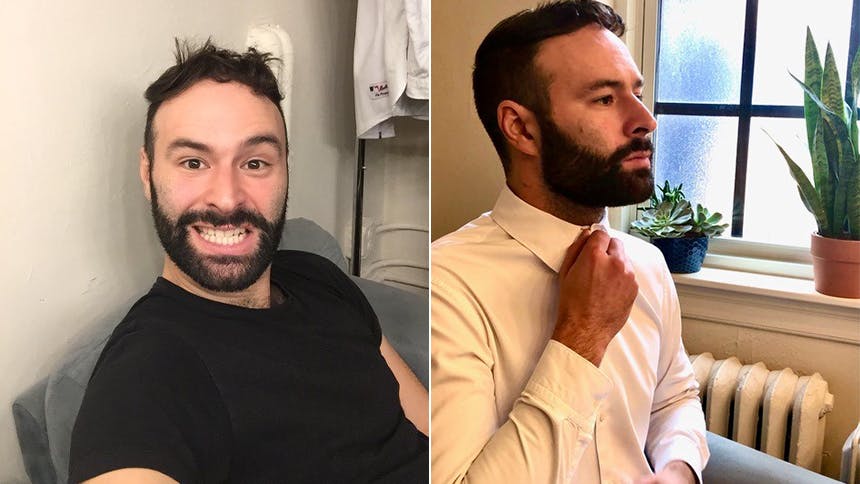 . Though the play about a long-term affair between a wife and her husband's best friend lives comfortably in the realm of drama, Eddie provides much-welcome comic relief as the Italian waiter in Betrayal's funniest scene. Eddie co-starred with Hiddleston, Cox and Zawe Ashton in the revival's acclaimed UK run. His other London stage credits include Hamlet, Journey's End, and The Vote.


BroadwayBox gets to know Eddie a bit better as he talks crafting his LOL Betrayal moment, living in NYC for the first time, and the camaraderie of the Broadway community.

1. When you were initially cast, how did you begin building this character and this scene to make it as memorable as it is?
Entering a play halfway through, as the only other character, is a brilliant challenge that meant I had to hit the ground running. The beautifully written misunderstandings between the waiter and central characters and his defiance to not let them grind him down were really useful in helping the comedy ping out in the scene.

2. What did director Jamie Lloyd offer about this brief scene of comic relief?
Jamie was clever in reminding me that they are in my restaurant—I’m on home soil—so no matter how rude and obnoxious they are they’ll play by my rules. Staying true to that means the humour is organic and comes from the battle the three characters have with each other.

3.  What was the highlight of the show’s London run for you?
We were lucky enough to have been the last play of the Pinter at the Pinter season; so, to have all the other actors that had been involved throughout the year at the opening night of Betrayal was a great moment and wonderful celebration.

4. Who was your first call when you found out you’d make your Broadway debut with Betrayal?
Joey, my brother. Always the first to know!

5. How is Broadway different than how you imagined it would be?
Probably just how massive it is! There are at least five other theatres on our street alone, and we share the stage door with Phantom and Slave Play, so there’s always so much going on all around us! It creates a lovely sense of community and camaraderie amongst everyone.

6. What’s been the biggest pinch-me moment of this experience so far?
Some of my favourite actors have come to see the play and said the kindest things, but probably the day I arrived and going out for lunch and just laughing about how nuts it was that I was in NY.

7. Tell us a memorable audition story.
I spent three days learning a Mexican accent for a version of Much Ado reimagined during the Mexican Revolution only to find out at the audition they were doing it with British accents. Shakespeare in my own accent has never been harder and didn’t get the part. But I can do a pretty decent Mexican accent now.

8. Is this your first time living in New York? What do you love about living in NYC vs London?
It is my first time! I love that the tubes run all night and a slice of pizza is only a dollar! When I found that out it was a game changer.

9. Which film or TV show most directly influenced your comedy growing up?
The Office, Ace Ventura, and Austin Powers!

10. What’s your go-to backstage hobby to pass the time during the rest of Betrayal?
At the moment, I’m reading A Little Life by Hanya Yanagihara about four men’s friendship and life in New York. It’s over 700 pages long so it is keeping me very busy.

Hurry to Broadway’s Jacobs Theatre before December 8 to see Eddie Arnold in his Broadway debut in “Betrayal’.