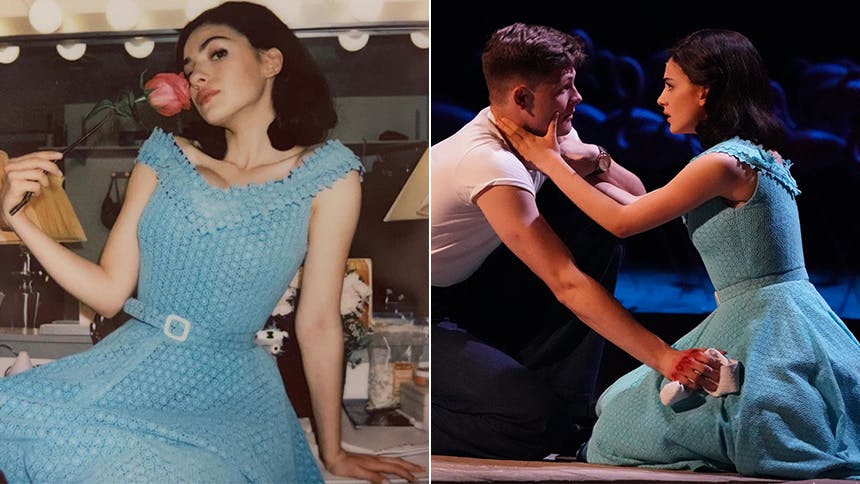 . Rosa is a teenager growing up in the Golf Coast in 1950; she's experiencing her first love and her sexual awakening while her widowed mother, Serafina (played by Oscar winner Marisa Tomei), remains rooted in the past.


BroadwayBox gets to know Ella a bit better below as she talks with us about making her debut, juggling high school and Broadway, her passion for the environment, and the remarkable women of Tennessee Williams.

1. How did this project first appear on your radar?
I wish I had a more exciting story, but my agents sent me an email with the audition information, script, and sides. I was familiar with Williams’ more popular works, like Glass Menagerie and Streetcar, but not The Rose Tattoo—the second I saw the email and read Rosa’s sides I was desperate to get the role.

2. What was your reaction when you found out you’d make your Broadway debut as Rosa in The Rose Tattoo?
I was on the couch with my sister when I got a call from my mom. I ignored it (sorry mom), but then got a text from her that said “CALL ME NOW.” I had been waiting for over a week to receive the news so when I picked up the phone and heard my mom and my agents screaming I burst into tears and could barely speak—I just couldn’t believe it. Dramatic, I know, but I’m an actress!

3. What’s the best piece of advice you received about making your Broadway debut?
Cassie Beck (who plays Miss Yorke in the show) told me, simply, to take care of myself. It may seem obvious, especially to a performer, but being new to Broadway (and in an emotionally and physically taxing show) it is easy to forget. Taking care of myself is vital to having a successful performance, so I try to do one thing a day that’s only purpose is my well-being. (By the way, Cassie gives me amazing advice everyday.)

4. What’s the most interesting or important thing director Trip Cullman said to you about the character of Rosa and her arc?
In our first week of rehearsals, Trip told how Rosa lives in her id, which is the part of our psyche that is impulsive and responds immediately to desires. This has hugely informed my take on Rosa; she is intelligent, yes, but also a teenager and sometimes lets her plans run wild. Her ego and superego are not working at the same pace as her id, which is what causes her to go after Jack with such ferocity. She doesn’t see the moral implications their relationship holds for him. Being able to definitively break down the psychology of Rosa (and the way it flows from the beginning to the end of the show) was a concrete way for me to understand her choices.

5. What’s your favorite moment onstage with Marisa?
This changes every day, as the show can be really different based on the audience’s energy. Lately, my favorite moment has been when I ask Serafina “not to spoil [the happiest day of my life] for me,” and she kisses me on the forehead and winks at me. It’s hard to explain, but it is hilarious and a moment that perfectly describes the rollercoaster that is a mother-daughter relationship. Rosa was furious with her a moment ago, and is now her friend again.

6. With such a large cast, what’s the best part of life backstage at The Rose Tattoo?
I wish I could answer this one concisely. I am so lucky to genuinely love spending time with this cast, especially because we spend a lot of it together due to the nature of the show. Act II is primarily Serafina and Alvaro, so the rest of us get to hang out. That’s the best part, really—just getting to be with everyone. Sometimes we play Uno, or play pranks, or dance; the best part is really spending time with everyone backstage. I’m very lucky to have a cast made up of hilarious people—I don’t stop laughing.

7. Which TV set have you enjoyed yourself the most on? What made it so special?
I really loved working on Unforgettable. It was my first ever TV job! I was 11 years old, so I just felt excited to be there. My mom was cautious about letting me do the show, as the whole episode was about my character’s kidnapping and trauma. Thankfully, she let me take the role. I thought it was really cool that the show was darker—I hadn’t gotten to play a character that had real fear or strife. When you’re that young and getting to do what you love, it’s always special.

8. How do you balance your senior year in high school with an eight-show-a-week schedule?
Truthfully, I’m not very good at it. I’ve been a very serious student throughout high school, so it has been a strange feeling to have to put that on the back burner. Playing Rosa requires my full attention, focus, and energy, so on the days when I can’t go to school, I get my work done remotely and send it into my teachers. No matter how utterly overwhelming or stressful all of this feels, I try to remind myself that education is a gift not afforded to everyone. I want to bring my all to the show, because that’s what it deserves, so taking care of myself and getting my work done in the moments between is how I’ve struck a so-called balance. I am pretty determined person when it comes to anything I commit to, so I’ll probably never find balance, which is okay. It’s about doing my best and finding moments of rest.

9. Tennessee Williams is known for writing some of the most incredible female characters. Is there another Tennessee Williams role you’d love to play someday?
This is a very daunting question. Like you said, one of the most special things about Tennessee Williams as the literary giant is the way he writes women. He said, “All my relationships with women are very, very important to me…I understand women, and I can write about them.” Sadly, nuanced female characters are a rarity, but in Williams’ work; there are so many Tennessee Williams characters I’d love to play. Amanda, Maggie, Alexandra…but to narrow it down, Maxine in The Night of the Iguana and Blanche in A Streetcar Named Desire. Maxine is yet another Williams woman who is completely free with her sexuality, and has a beautiful arc in terms of how she develops emotionally. She is soft, strong, sexual, lonely, tough, flawed…like all people. Blanche is also a layered woman, but has a clear dependence on men for fulfillment and social status. Fantasy is a part of her profession, but the lines between real and fake begin to blur, which is where her retreat from reality takes a sharp turn. She had a hard life and was abused, which almost forced her to seek refuge through sex. It is an eternally relevant piece of writing.

10. What’s one thing you feel passionately about besides performing?
Social justice, or more specifically, doing what I can to preserve our environment. I was always passionate about this work, but it grew exponentially once I looked into the ways good affects our Earth and changed my diet because of it. When I began high school, I started writing articles for various publications about health, sustainability, and the overwhelming anxiety that can accompany addressing our world’s issues. I feel so strongly about this subject and am vocal about it—both in real life and online—though it can be ostracizing when you’re a teenager. However, it’s worth it when I see people making changes in their lives (no matter how big or small) for the food of the world. Our generation is smart, and they are ready to challenge the misguided ideas of those who came before us.

Hurry to Broadway’s American Airlines before December 8 to see Ella Rubin in ‘The Rose Tattoo’.