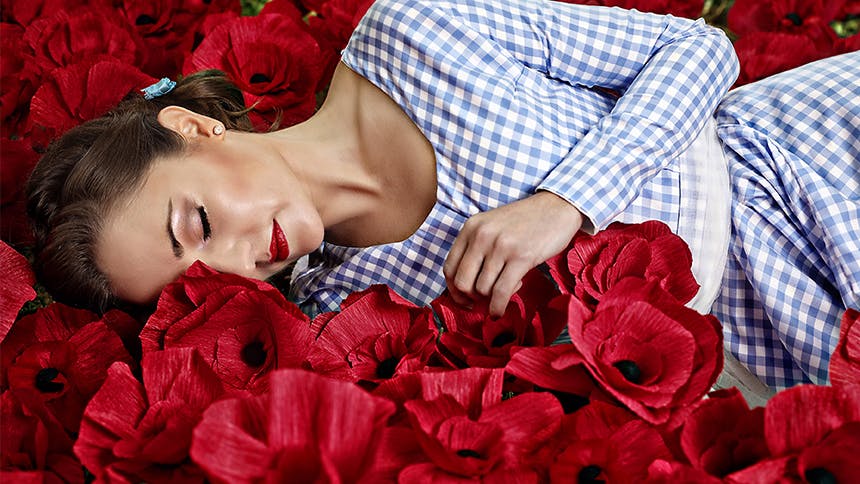 For the 80th anniversary of MGM’s Oscar-winning 1939 film The Wizard of Oz, BroadwayBox teamed up with photographer Curtis Brown, award-winning & up-and-coming costume designer Beck Jones, and director/videographer Jaytel Provence to present Broadway Celebrates Oz, a modern, editorial look back at Oz in 2019 and its beloved characters. Over the next few weeks, BroadwayBox shines the spotlight on each of the illustrious participants in the series. First up is our Dorothy Gale, two-time Tony Award nominee Laura Osnes.

Laura Osnes first appeared on the scene after winning the TV reality competition Grease: You’re The One That I Want!. She made her Broadway debut playing Sandy in the 2007 Broadway revival of Grease.


From there, she replaced Kelli O’Hara as Nellie Forbush in Bart Sher’s Tony-winning production of South Pacific.


Next came the Roundabout revival of Anything Goes starring Sutton Foster. Laura co-starred as the easy to love Hope Harcourt .


In 2011, Laura opened the Frank Wildhorn musical adaptation of Bonnie and Clyde opposite Jeremy Jordan. Though the production was short-lived, it pushed Laura and Jeremy’s careers to the next level. Laura received her first Tony Award nomination in 2012 for her performance as Bonnie.


Laura returned to Broadway in 2013 leading the new revival of Rodgers & Hammerstein’s Cinderella. For that stunning performance she picked up a second Tony nomination and the moniker “Broadway’s Princess”.


Laura’s most recent Broadway outing was the 2017 musical Bandstand. She blew audiences away as a WWII widow who leads an all veteran band.


On Thursday, December 5, 2019, Laura will star in Hallmark’s Christmas movie A Homecoming for the Holidays, in which she plays a country music star returning home for Christmas who finds unexpected romance with a military vet.

Photo by Courtesy of Hallmark


So when it came time to find our Dorothy Gale for Broadway Celebrates Oz, Laura Osnes was tops on our list.

Two-time Tony Award nominee and star of Hallmark's 'A Homecoming for the Holidays' Laura Osnes as Dorothy Gale.

Laura Osnes as Dorothy & Ariana DeBose as The Scarecrow

Laura Osnes as Dorothy & Matt Doyle as The Tin Man

Jelani Alladin as The Cowardly Lion & Laura Osnes as Dorothy

"I'm not a witch at all. Witches are old and ugly."

"You've always had the power my dear, you just had to learn it for yourself."

Newer
Exclusive First Listen! Hear “Be the Change That You Wish to See in the Galaxy” From Off-Broadway’s A Musical About Star Wars
Older
Spend a Grand Two-Show Day At Broadway's The Lightning Thief with Leading Lady Kristin Stokes