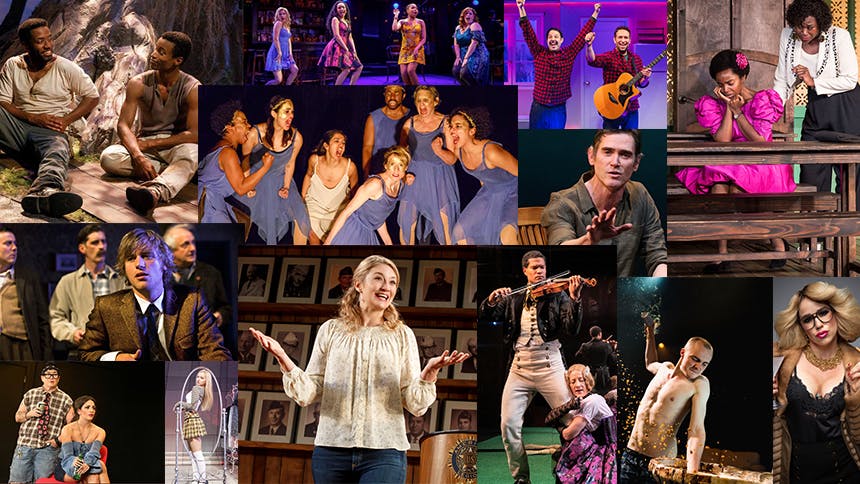 Everyone knows some of the best work in the New York theatre scene happens off-Broadway, especially at the subscription houses and non-profits, where daring new work can leave audiences shaken. Scroll on as Bbox looks back on a dozen incredible off-Broadway productions from 2018, and what made each so special.

1. What the Constitution Means to Me at New York Theatre Workshop


Heidi Schrek’s personal and searing look at the American constitution and who it protects and why knocked me out cold. When she told audiences more women in America have died at the hands of their male spouses this century than Americans have died in war (including 9/11), you could feel the air leave the room. If I had money for Louboutins, I would send a pair to the incredible high school debater Thursday Williams.


Every actress on that stage was a star. Unlike with Mean Girls, playwright Jocelyn Bioh lets you see her “plastics” at their worst and rawest, and you loved them all the more for it. Maameyaa Boafo performance as the main mean girl Paulina was one of the most brilliant performances I witnessed all year.

3. Collective Rage: A Play in 5 Betties at MCC Theater

This hilarious, subversive comedy captured my heart. I’ve never heard the word pussy used more in any show ever, and I’ll never forget watching Adina Verson deliver the most genuinely funny performance of the year.


This show slayed me with its creativity, playwriting, and theatricality. How I wish  Lucy Taylor’s monologue was preserved beyond that limited run.


There’s not much to say about the explosive, surprising, and sold-out hit except to say that it’s a much more interesting look at race in America than much of the Broadway fare. Brilliant staging, daring new writing, and stunning performances made this seemingly uncomfortable piece absolutely extraordinary. Give them that Drama Desk ensemble award.


What happened to this alleged transfer?! This stage thriller had audiences at the edge of their seats the entire time. That huge cast each delivered a star performance. Johnny Flynn’s twisted performance as Mooney was Tony Award-worthy, and I’d fight anyone who disagrees.

7. Sugar In Our Wounds at Manhattan Theatre Company


The first piece in Donja R. Love’s “Love Trilogy” was so special and moving. It told a story we’ve never seen before—two males who fall in love while enslaved on a plantation. I especially loved Stephanie Berry’s performance as Aunt Mama.

8. The Other Josh Cohen


A fun, romantic, and actually LOL 90-minute musical gem. It was like a sitcom in pacing and performance, and it was divine. I would easily recommend it to anyone and everyone looking for a laugh.


David Cale’s solo play about a gay con artist living in NYC received a limited run from Audible, and it was a reminder of the unbelievable talent of Tony Award winner Billy Crudup.


As far as experiential, environmental theatre goes I LIVED for this. You are seated about three feet away from the action, and yet these actors have you believing the world around you is real. I was in awe of this young troupe of actors and their raw performances as heroine addicts.


Pearl’s a singer and so is Alysha Umphress. I love a Smokey Joe’s moment, and I thought this revisal was cast to absolute perfection. Each of those talented people on stage was a star, and together they created a revue that was undeniable. Also props to director/choreographer Joshua Bergasse for his vision on this.

12. This Ain’t No Disco at Atlantic Theater Company & Clueless at The New Group

These are paired because there are performances in each that I treasured so much. Clueless had Dove Cameron giving you a star-is-born performance as Cher—do the Wicked movie ASAP and cast her as Glinda. Then Ain’t No Disco had Chilina Kennedy as Binky, and I realized this leading lady on Broadway is actually a gifted character actress; she just hasn’t been given the chance. Please lets see more of each of these fine ladies in 2019.