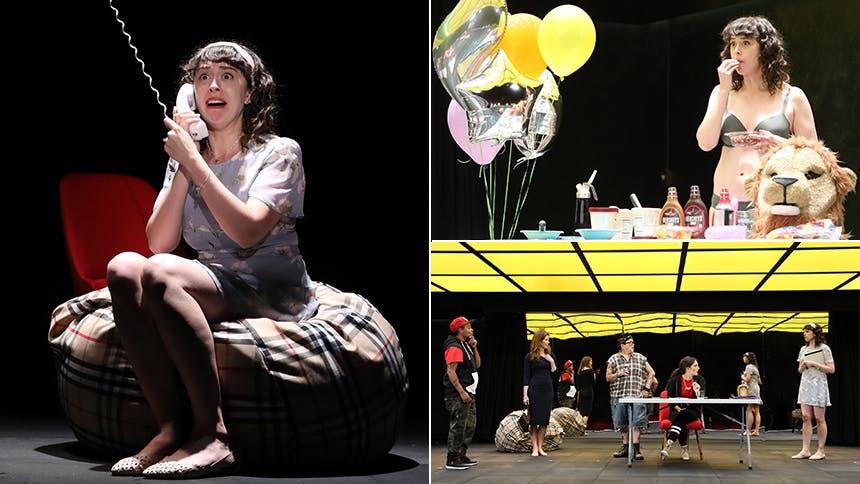 Adina Verson gives a performance everyone is talking about as Betty 2 (a walking bundle of nerves who discovers her true self through her friendships with four queer women all also named Betty) in MCC Theater's critically-acclaimed hit Collective Rage: A Play in 5 Betties

. The comedy comes to a close October 7, and I urge you to get downtown to see these performances— Adina's showstopping monologues alone are worth the price of admission.


BroadwayBox caught up with Adina to discuss finding her unique character, the female comedians that inspire her, and her dream for a Joni Mitchell musical.

1. How did you build this incredible performance as Betty 2? What did you do to find her?
Oh wow, what a lovely question, thank you! Honestly, I related so much to her right off the bat, from my first reading of the play. Jen [Silverman, the playwright] has brought incredible humanity to such an absurdist character and that's perhaps my favorite place to live as an actor. For me, the biggest work was to keep a strong foundation of truth to her, and to find the courage to go there every day. I've felt like a rubber band playing her, so there's a lot of freedom in the elasticity but it also hurts a lot to keep stretching and letting go and stretching again.

2. If you could sit down and interview a female comedian that’s inspired you, who would you choose?
Probably either Carol Burnett or Julia Louis-Dreyfus, because duh. What I love about them is that they’ve been able to create such amazing careers without having to lead with the fact that they’re women. Don’t get me wrong, I love me an Amy Schumer or a Lena Dunham, but I was always particularly inspired by the universality of their comedy in a field that often feels split by gender.

3. In addition to your MFA from Yale, you have a BFA in musical theatre from Boston Conservatory. What’s your dream musical role?
I don't think it's been written yet! But literally anything by The Bengsons. Or where is the Joni Mitchell musical?! Written by Jenji Kohan, directed by Ivo van Hove, movement by Steven Hoggett? Can we make that happen??

4. You spent years with Paula Vogel’s play Indecent, even making your Broadway debut in 2017 with the piece. Did you keep anything sentimental from it after it closed?
My costume pieces all smelled quite pungent by the end of that run so I didn't keep any of those, but I did snag my name plate from the cast list that hung in the lobby.

5. What is the best part about sharing the stage with the four Betties? Is the camaraderie different with a small, all-female cast?
This cast in particular is so diverse—we’re very close and very far at the same time, if that makes sense, and I’ve learned so much from each of them. My favorite part about this process has been the laughter, at ourselves and at our differences, because that’s what brought us together the most. Oh boy, we love to laugh.