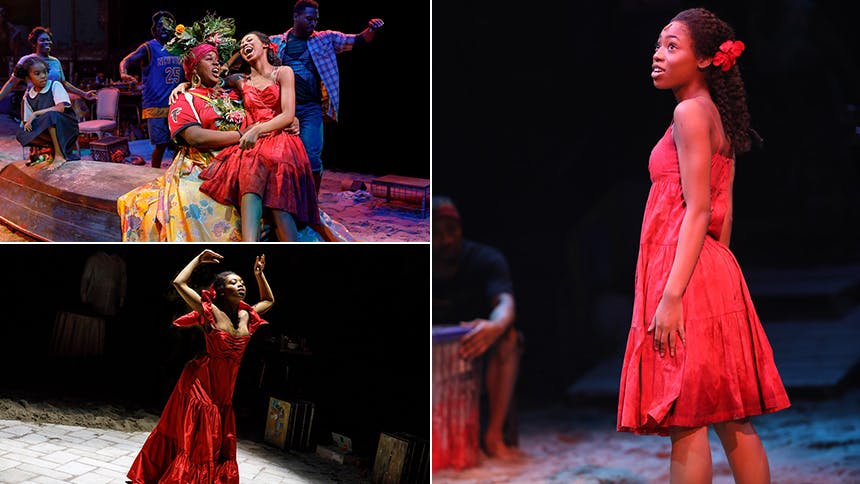 , earning herself a 2018 Tony nomination for Best Performance by an Actress in a Leading Role in a Musical. The show ends its acclaimed run on January 6, and then Hailey brings that incredible voice to Feinstein's/54 Below on January 30 for her solo concert debut. BroadwayBox caught up with Hailey to talk about the full experience leading Once On This Island, her dream projects, and more.


1. Now as you approach the final week of the Broadway run, if you could go back and tell the Hailey who was just cast as Ti Moune one thing, what would you want her to know?
Oh my goodness! I would look at her and say, “You are so so worth it. There is nothing to fear and no one to compare yourself to. You absolutely deserve to be here as much as everyone else and you can shine. Put your head down, focus on the work, and shine girl!”

2. What are three things you had to learn for yourself about leading a show on Broadway?
You have to take care of yourself. Seriously, no one’s going to do it for you, and it’s not their job to. You have to sleep and focus your energy! The more that you do that the experience will be EVEN BETTER!! Also, stretch and go to PT. That is your best friend!

3. What do you do to enjoy being young in New York and take a break from the stress of Broadway?
I love going on spa dates with myself! But I honestly live like a monk. Go home and rest my brain, heart, and body. I really love working though, so breaks make me uncomfortable. In all honesty, I’m typically working even at home and at the spa. [Laughs]

4. What’s your favorite one small moment in Once On This Island?
The little girls telling the story at the end of the show. Small moment that means EVERYTHING to me. It’s the whole purpose of telling the story coming to fruition! I am so proud of our island princesses and I can’t wait to see what they do next.

5. Can we secret out in the universe what’s next by answering the following mini-questions?
A. If you could join any TV show you love: OOOHHH!! I would absolutely love to be in American Horror Story or anything Ryan Murphy put his hands on!
B. Who is on your co-star bucket list: Condola Rashad, Bryan Cranston, Idina Menzel, Keke Palmer, Angela Bassett—Oh what the heck, everybody.
C. Dream musical revival: Caroline, or Change
D. Dream composer for an original work: Pasek and Paul, hands down.
E. Dream non-musical: ANYTHING AUGUST WILSON!

Don't miss Hailey Kilgore's Tony-nominated performance as Ti Moune in Once On This Island at Broadway's Circle in the Square Theatre through January 6, 2019.

Once On This Island
Best Priced Tickets
Newer
Ato Blankson-Wood & James Cusati-Moyer Talk About The "Dangerous and Sexy" Slave Play, Audience Reactions, & Going from Besties to Co-Stars
Older
Conor MacNeill Brings Instagram Along for a Look Behind the Scenes at Broadway's Hit Drama The Ferryman
Sign up for BroadwayBox Discount Alerts