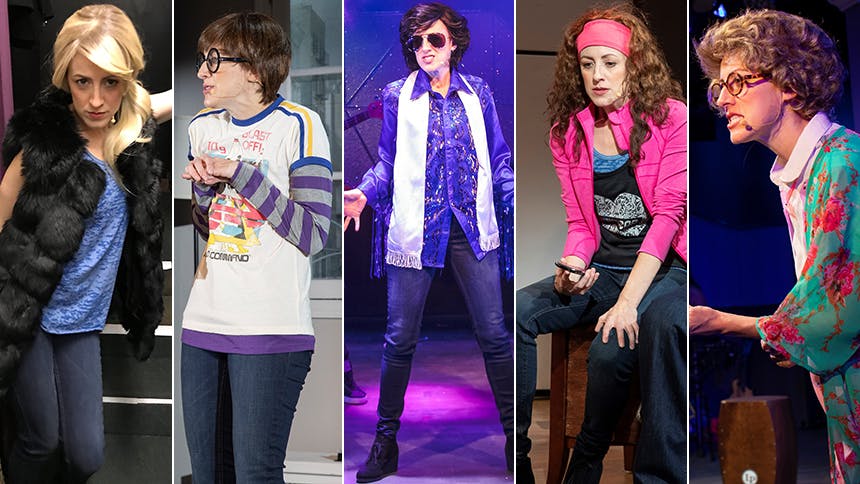 There are so many reasons to see the delightful and truly hilarious new off-Broadway musical The Other Josh Cohen, one of which is the unbelievable featured performance by Kate Wetherhead. The star and co-creator of Submissions Only and the book series Jack & Louisa plays 15 different characters throughout the one-act musical, ranging from an 80-something-year-old woman to Neil Diamond to a nine-year-old school crush, and slaying each and every one.

Scroll on as Kate introduces us to each of her The Other Josh Cohen characters and costumes in the photos below.


That's how I'm credited in the program, so I guess that's what I'll call my base costume.  I don't want to get too specific about this character because there's an element of surprise to her.  She comes and goes throughout the show, playing keyboard and auxiliary percussion and observing the antics of the two Josh Cohens (played by Steve Rosen and David Rossmer).


They include a mime, an umpire, and three women who reject Josh in one way or another.  I'm lumping them all together because their flames burn fast and bright.


She is a new co-worker of Josh's; he has a crush on her from a distance.  Their brief exchange is thwarted by a misunderstanding.


Nine years old, she is a classmate of a young Josh who rejects his Valentine’s Day overtures. I always pretend to be really stuffed up when I play her. I enjoy her frog earmuffs immensely.


Described in a lyric as "a blend of Sporty Spice and Gertrude Stein," Jen is another recipient of a Valentine’s Day poem written by Josh but she is also not into it. She's got a bit of a Diane Keaton look to her. I think she's very snooty.


This is an amalgam of every girl Josh has tried to date in his adulthood.  Her faux fur vest, heavy side bangs and red sunglasses make me feel appropriately nightmarish.

She is probably the most "normal" character I play... until she's not.  I have to be coy about describing these characters because so many of them experience a turn, which is really fun when you don't see it coming. I will say her pink moto jacket has gotten a lot of positive feedback from my friends.  It might have to come home with me when the show closes in 2025.


I always knew I would play Neil Diamond one day; the similarities between us are just too uncanny.  I can't tell you how many times I've been stopped on the street, only to disappoint fans who think they're getting a chance to meet one of their idols.  At least now I get to dress like him. And that wig... Is a thing of beauty.


She's my favorite. If you see the show that might strike you as odd, as she's not on stage for very long, but there's just something about her that tickles me.  Those glasses make me feel like a little nerdy bug.  And she gives Josh a fantastic gift.


I'll just leave that there.


The mischievous, libidinous, "very virile" patriarch of the Cohen family.  Nothing says sexy like a 5'2" lady in an oversized black wool coat and payot.


Josh's sister. She has a big voice, big hair, and a big husband (Luke Darnell is SO MUCH taller than me).  She is perhaps overly concerned about Josh's well-being but it comes from a very loving place.


I'm trying (probably unsuccessfully) to mimic a woman I overheard on the street one day who sounded like she was constantly exposing her bottom her teeth as she talked.  She is not afraid to rock a sheer floral print top.  She also thinks she's a riot.


Once again, I must refrain from saying too much.  But I'll say that I care for Irma very deeply, and the beaded chain on her glasses is everything to me.

She is of European descent, wears a fabulous pair of bedazzled glasses, and has a very sunny disposition.

The Other Josh Cohen
Best Priced Tickets
Newer
#TBT 12 Essential Videos of The Cher Show Star Stephanie J. Block
Older
The Stars of Broadway's Magic Show The Illusionists Share Advice On What Magicians Should Know About Performing Magic on TV
Sign up for BroadwayBox Discount Alerts