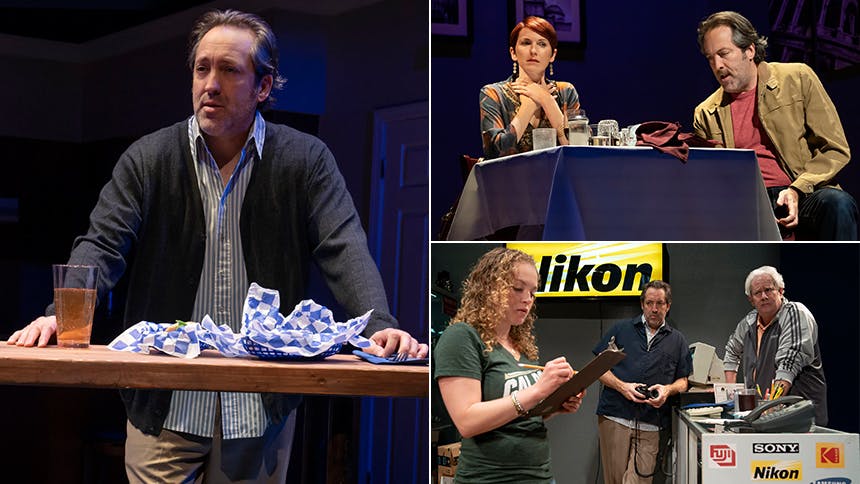 . A Steppenwolf ensemble member since 2007, Ian originated the role of Little Charles in the Broadway and the West End productions of Letts' Pulitzer & Tony-winning epic August: Osage County. He also co-starred in Letts' Mary Page Marlowe and The Minutes, as well as the Tony-winning Best Play The Curious Incident of the Dog in the Nighttime. He's played Wheeler in the Chicago and Los Angeles productions of Linda Vista before bringing it to NYC. BroadwayBox caught up with Ian to discuss his mammoth and unsympathetic role in Linda Vista, working with his stage family on August: Osage County, and advice for those interesting in joining Steppenwolf.


1. This is your fourth play with Tracy Letts. How did he approach you with Linda Vista? What’s the most striking thing he told you about the character of Wheeler?
There was nothing remarkable about how he approached me with Linda Vista. He asked me to do a reading of it and from that point on, I have been Wheeler. The most important thing Tracy has emphasized with me in playing Wheeler is to be courageous enough to not ask for sympathy. It's a huge and complex character full of many flaws and blind spots—we hope folks can have myriad feelings about him. It's easy to toss him into a general category but I don't think that's what is actually there. The wonder of drama (in the hands of great writers) is that it allows us to examine our humanness in all its complexity, ugliness, valor, humor and pain. A note Tracy gave me at some point that really opened some doors for me: Wheeler says to Minnie, "I'm kind of a snob," after ranting about our "lousy comic book culture." I had been coloring "I'm kind of a snob" as an apology toward a perceived unsympathetic ear—Tracy said, "Don't apologize—Wheeler is proud to be a snob."

2. How has your Wheeler changed from Steppenwolf to the Taper to Broadway? How has the audience reaction to him changed as America’s political and social landscape shifts?
My Wheeler has changed for sure. It mostly concerns the inner layers of pain, upon which his paltry attempts at managing his life are built. Also, I'm hopeful that I've become more relaxed and simple in my trust of Tracy's fantastic words—letting them have their gravity without any unnecessary coloring. Certainly the evolution of the #MeToo movement since the original production has created a new way of perceiving the play and its characters. Tracy has continued to work very hard on the text with each iteration of the play and I believe these changes have added veracity and currency to the play. Ultimately though, the responses are wonderfully diverse.

3. What’s your all-time favorite or most cherished memory of the whirlwind Broadway run August: Osage County?
August: Osage County changed our lives. It was a gigantic tsunami that we all rode for many years and, to some extent, continue to ride. I had never been in a play that had remotely the same impact as that one did. I remember over hearing someone on their phone talking about it to a friend, and it was a revelation on what is talked about as 'word of mouth'. The nature of the call was that YOU MUST SEE THIS. The 'must' was emphasized in a way I had never heard. The blessing of getting to be a part of that family is something I will forever cherish. Sitting around that dinner table in ACT 2, with people I have known my entire adult life, been in countless plays with, shared the full range of theatrical experience with was just indescribably wonderful. A once in a lifetime thing. Opening the playing at the National Theater in London was unforgettable.

4. You barely ever leave the stage in Linda Vista. How do you prepare to get yourself through his colossal task and then how do you come down from it after a show?
In fact, I NEVER leave the stage during Linda Vista. Now that I think about it, I'm actually on stage before the play starts in BOTH ACTS. Dexter Bullard, our director, incorporated a 'move-in pre-show', which requires me to be out there moving boxes in before the actual play begins...AND I am required to be sitting on the couch rotating on the revolve watching Barry Lyndon before the second act.

I have barely enough time to use the restroom and drink some water during intermission. Oh poor me :). I have an extensive pre-show routine which involves several exercises, which stabilize my body (particularly my bum hip, which is real!) and mind. Then thorough vocal warm-ups—Wheeler is a talker :). I am still searching for a proper post-show routine. The soul pain the guy is in is very hard to drop.

I shall continue searching.

5. What advice would you give to an actor who dreams of joining the Steppenwolf Theatre Company someday?
Steppenwolf has a wonderful school that has continued to grow and refine itself. I would recommend young actors try to get involved at the school if they are interested in working at Steppenwolf.