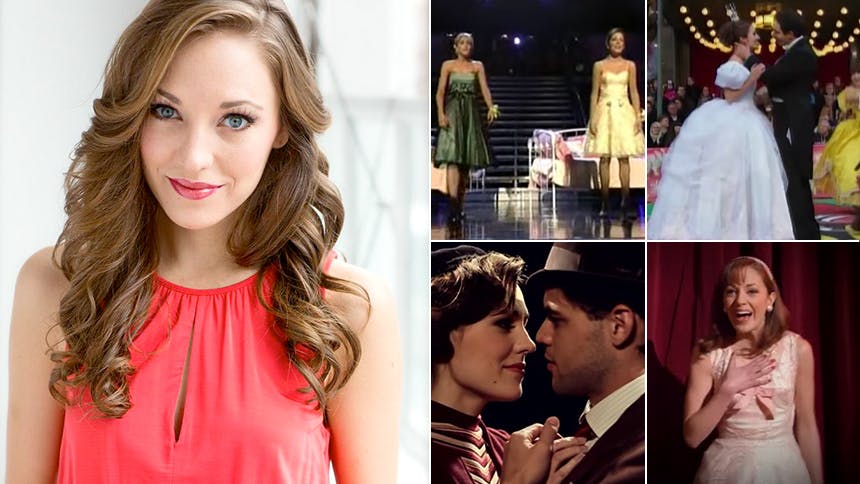 . Osnes singing Eliza Doolittle is going to fast become one of our favorite YouTube obsessions, so in anticipation BroadwayBox talked with the Cinderella, Grease and The Bandstand star about five current YouTube videos that fans adore.


Aaaaw! This was Cinderella's very first public appearance, so it was extra exciting for all of us! Having not even started the Broadway production, which was to open the coming spring, we had special rehearsals and costume fittings just to put together this number. And it was only about two-thirds of our actual Broadway cast—we had a bunch of pinch-hitters performing for ensemble members who had made Thanksgiving travel plans or had yet to be cast! William Ivey Long worked his costume magic to get my quick-change transformation and ball gown ready, as well as Vicki's Fairy Godmother look, but you may notice little changes as he continued to refine our looks before our official opening months later. Santino and the ensemble wore costumes pulled from the William Ivey Long trunk... supposedly from a production of A Christmas Carol he once designed!

“Hopelessly Devoted to You”, Grease Finale, 2007


Oh, reality TV. First (and only) spray tans of my life. I'm really glad I did this, but I wouldn't ever want to do it again. We were all so young, and I think the other contestants would agree that the odd pressure of performing/competing in such a way was a lot to handle. Truth be told, the contestants all got along surprisingly well, even though NBC tried to create drama between us. They never told us how close votes were or anything, but we're all forever bonded for going through that crazy reality TV experience together. I still call Max Crumm (who won the role of Danny) my "war-buddy."

In this finale episode moment, I was definitely anxious, but really trying to focus, stay calm, and just do my thing. Getting to hug that pillow after my first verse was comforting. I can definitely tell my performance is riding the line between earnestness and desperation, haha. How can it not, when you're singing for your survival in one of the most important, potentially career-altering performances of your life?! My smile at the end is of relief at the sound of applause for it being over.

And can I just say, Ashley sounds and looks FLAWLESS. Wow. We've definitely stayed in touch since Grease and remained friends (especially since she took over the role of Sandy when I left, AND two years later was the fiancé of my costar Jeremy Jordan during Bonnie & Clyde! I got to attend their gorgeous wedding in Ohio, and we always look forward to seeing each other at concerts and events.) I actually went to Paper Mill to see her star in The Producers this weekend!


In reality, this was a lot of standing around, trying to pass the time and not laugh while gazing at Jer for three hours. We had been recently reunited after going out of town with B&C ten months prior, and got out early our third day of B'way rehearsal to go shoot this. I remember hair-supervisor Pat trying to recreate Bonnie's bob with my real hair. Don't know why, but I never got to wear my wigs for the photo/video shoots and it always took a lot of finagling to get my long hair to look just right. This demo of "How 'Bout A Dance" I had recorded with Frank Wildhorn almost a year earlier.


I can't believe I was asked to do this. What an honor to be a part of Sondheim's incredible documentary, representing Beth in "Opening Doors". Plus, I got to reunite with Jeremy again (which was reassuringly helpful since I had no experience being on a film set. He was my buddy there and kept helping me with all the TV lingo, explaining what "last looks" meant, and so on). Darren Criss and I had met and bonded at the Broadway.com Audience Choice Awards that season, but doing "Opening Doors" together got to solidify our friendship status. I didn't know America Ferrera before this but was blown away by her down-to-earth, genuine kindness and sense of humor.

The four of us recorded the track in a studio together with MD and dear pal, Andy Einhorn, who was also conducting Cinderella at the time. They started filming a few days before I joined for the final two days on set. We were in a giant New York warehouse on an empty turntable stage and green screen. Almost every element of the "set" was added/edited in after, so it was pretty exciting to eventually see the final product.

Sondheim was there, but I didn't get to interact with him too much. James Lapine directed the number, and I just prayed I was doing it all justice and not over acting. Plus, the theater nerd in me was freaking out... and as Beth sings, "I really thought I stank," however I knew I was in good hands.


I love that this video has become such a hit with fans and friends alike! The press team at the Lyric wanted Steve and me to fully reenact a section of our Bench Scene staging in that tiny room, and in our street clothes, and we both knew it would just be awkward. So as the cameras were setting up, we asked if we could just stand and sing it casually at the piano. They reluctantly agreed. But not knowing which section of the scene they wanted to use, we just recorded the whole thing and they ended up posting it all! We still thought it was kind of awkward, but luckily no one else did, haha! We had such a grand time together in Chicago playing these iconic roles in Rob Ashford's gorgeously epic production.

Newer
Exclusive Hot Clip of the Day: Molly Pope Slays The House Down Singing "The Man That Got Away" from A Star Is Born
Older
October Editor's Picks: 10 Plays & Musicals to See This Month in New York
Sign up for BroadwayBox Discount Alerts