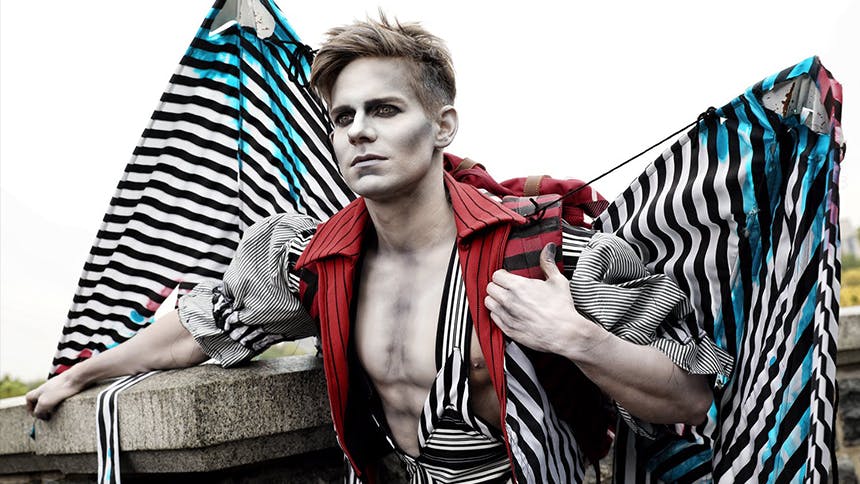 For the 80th anniversary of MGM’s Oscar-winning 1939 film The Wizard of Oz, BroadwayBox teamed up with photographer Curtis Brown, award-winning & up-and-coming costume designer Beck Jones, and director/videographer Jaytel Provence to present Broadway Celebrates Oz, a modern, editorial look back at Oz in 2019 and its beloved characters. Over the next few weeks, BroadwayBox shines the spotlight on each of the illustrious participants in the series. The final participant highlighted is Andrew Keenan-Bolger, who transformed into the Witch's Flying Monkey.

Andrew’s career began as a child actor. He appeared as Young Scrooge in the Alan Menken and Lynn Ahrens A Christmas Carol. He was The Little Boy in the first national tour of Ragtime. Then he made his Broadway debut as a replacement Chip in Disney’s '90s hit Beauty and the Beast.

In 2000, Andrew starred as JoJo in the world premiere of Ahrens & Flaherty’s new Dr. Seuss musical, Seussical. He remained with the show as the JoJo alternate when Seussical transferred to Broadway later that season.


If you grew up a fan of Nickleodeon’s TV series The Naked Brothers Band, you’ll remember Andrew in the recurring role of Christophe.


Next, Andrew toured the country as Leaf Coneybear in The 25th Annual Putnam County Spelling Bee.

Then, Andrew returned to Broadway as an adult in 2010 playing the role of the adorable, fumbling butler, Robertson Ay, in Disney’s Mary Poppins—a role he played on tour before joining the Broadway company.

A year later, Andrew appeared in the featured role of Omar in Disney’s world premiere of Aladdin in Seattle.


AKB’s breakout role came in 2012 in another hit Disney musical adaptation. Andrew played Crutchie in the original cast of the Tony-nominated musical Newsies, receiving an Outer Critics Circle nomination for his performance. He then reprised his role for the live film of the musical (available now on Disney+).

In addition to his work as an actor, Andrew, along with collaborator Kate Wetherhead, created the popular web series Submissions Only, which ran for three seasons from 2010—2014. In 2015, he and Kate published the first book in their young adult book trilogy, Jack and Louisa.


We couldn’t be more thrilled that Andrew agreed to transform into The Flying Monkey opposite Donna Murphy’s The Wicked Witch of the West for our Broadway Celebrates Oz series.

Andrew Keenan-Bolger as The Flying Monkey

"Going so soon? I wouldn't hear of it. Why my little party's just beginning."

Actor and author Andrew Keenan-Bolger as The Flying Monkey