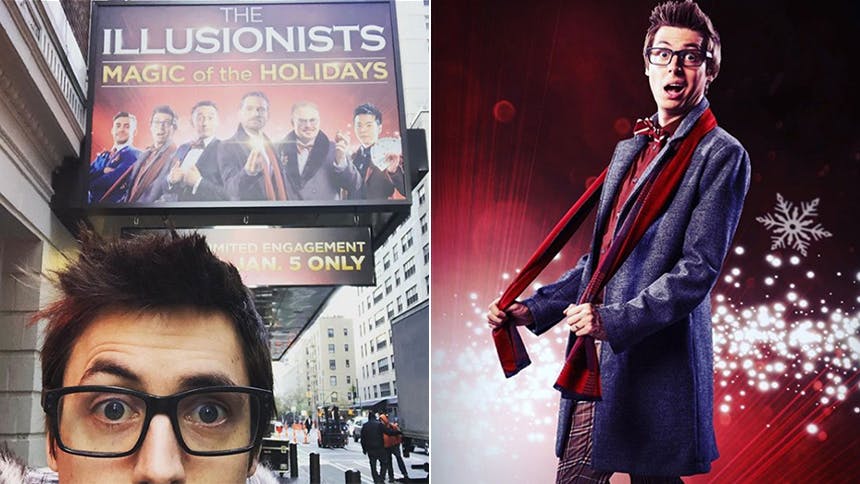 . The award-winning British performer is the only mind-reader in history to have played Broadway, London’s West End and Sydney Opera House. He's also a writer and the magic & illusions assistant for London's Harry Potter And The Cursed Child.


Scroll on as BroadwayBox gets to know Chris a bit better as he talks reading minds, training wizards, and his first Christmas in NYC.

1. What was your reaction when you found out you’d make your Broadway debut with The Illusionists? Who was your first call?
It’s a cliché but it felt like a dream come true. I adore magic but my real love is theatre and to think that I get to play Broadway is amazing. Strangely enough, the Neil Simon is the first theatre I saw a Broadway show at—it was Hairspray—and now to be playing the same room is just crazy.

2. How did you first get into mind-reading?
I was at home in England and was ten years old and I got a letter that was delivered by an Owl. Seven years later, I graduated from Hogwarts as a mind reader. Hufflepuff and proud.

3. How do you work with audience members who are hesitant to participate?
I use a lot of audience participation—I need minds to read! And luckily, it’s quite rare that people hesitate because I make it so much fun, and there is no better way to experience the show than to be a part of the show. Of course, if people really don’t want to get involved, I don’t use them, but the more involved you get, the more fun it becomes!

4. In your career, what’s been your biggest onstage mishap while performing?
Saying the name of a totally different city to the city I am, three times… what an idiot!

5. How did you come about working on the magic in Harry Potter and the Cursed Child? What was that experience like?
It was incredible. I was very lucky that the original magic creator, Jamie Harrison, and his associate, Chris Fisher, knew of me and my work. I remember sending them an email when I first saw that show saying how I thought it was the best magic show in the West End and how as someone who loves theatre I love that it will bring a whole new audience to theatre. So, to then get asked to join the team was wonderfully flattering. I help look after the London production making sure the magic stays magical and training the new casts on how to be wizards.

6. What is your favorite city in the world to perform in? What makes it such?
I don’t mean to be sycophantic here but it’s got to be New York. This city has such an energy about it and Broadway feels so special. I’ve been lucky enough to have played London’s West End, Sydney Opera House and now Broadway in the last 12 months, and this Broadway run is really special. Also, the audiences are SO into the show, especially as we embrace the magic of the holiday season.

7. Who inspires you professionally?
Penn & Teller, Tim Minchin, Mark Rylance and Lin-Manuel Miranda. The way they do what they do makes me strive to be a better performer. They are all other worldly in their brilliance.

8. What’s the best part of being in a troupe like The Illusionists vs when you tour solo?
The best thing is that it’s like being in a big family. We all support each other and hang out before and after the show. It also means we all can help each other with our acts and making little refinements and changes to make it constantly better. It’s such a creative atmosphere. It’s a real delight.

9. What is one thing you HAVE to do this holiday season while staying in New York?
I have just had a new baby, so I’m very excited about my wife, baby and toddler coming to join me. We are going to see Santa at Macy’s and will try see the Rockettes too to get in the festive spirit. Although I feel like I’m full with festive spirit already from doing our show. It’s such a lovely warm feeling.

10. What question do you receive most often from fans, especially after they see you live?
Do you really drink that water? And you’ll have to come see the show to see what they mean!