All the Great Literary References of Broadway’s The Sound Inside 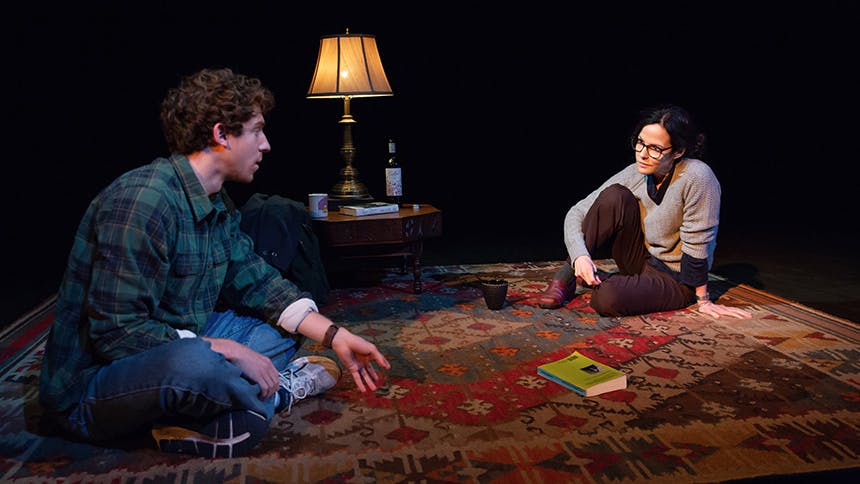 is feast for literature lovers. Adam Rapp’s stunning new play stars Tony winner Mary-Louise Parker as Bella Baird, an author and Yale writing professor, and Will Hochman as Christopher Dunn, her talented student. In addition to the incredible performances and writing, the play boasts some terrific literary references that work to develop who these characters are based on the books and authors they love and hate.


So taken with the literary themes of The Sound Inside, I combed back through the script to highlight some of the best.

A novel about a marriage, its disintegration, and the lives of the couple after it ends.

Bella: “At home I had been sitting in my favorite chair – an overstuffed plaid recliner – re-reading James Salter’s Light Years. It’s a book I read every year, often in the fall; that rare work of fiction that continues to reveal new things with each reading. Salter’s meditation on infidelity and love and loneliness... and divorce... and the suburbs and dogs and wine... I don't even teach the book because, well, because quite honestly, it’s so good that it sort of enrages me.”

Told over two days, the novel focuses on the recently expelled sixteen-year-old Holden Caulfield and his adventures in New York.

Bella: “The only distinguishing characteristics Salinger gives Holden Caulfield are his height and that little patch of gray hair at the side of his head. If you do your authorial job correctly your reader will create the rest of the character.”

Bella: “The first novel we always study at the beginning of the fall term is Richard Pevear and Larissa Volokhonsky’s translation of Crime and Punishment. One of the many things I love about Dostoyevsky’s masterwork is the way he renders his antihero. Discussions about Raskolnikov never disappoint. I’m always surprised by who connects with him, especially after he commits the two grisly murders. Gender doesn’t seem to have anything to do with it. Despite the fact that his two victims are female, the young women in class jump to his defense as aggressively as the young men, sometimes more so. It turns out that Raskolnikov is an equal opportunity sympathy monger.”

The novel follows the relationship between a teenage boy and his stray dog in post-Civil War Texas.

Bella: “What’s your favorite book?”
Christopher: Old Yeller. And Franny and Zooey. And Faulkner’s The Wild Palms.
Bella: “That’s three books.”
Christopher: “They’re interchangeably superlative.”
Bella: “Fair enough.” Christopher:“Old Yeller probably has a slight edge over the other two. When Travis has to shoot Old Yeller it’s more heartbreaking than fucking Bambi. I’m even cool with the puppy being born at the end—it’s that good. And Carl Burger’s illustrations are individual masterpieces that should be hung in museums... And the last paragraph... ‘When finally I couldn’t laugh and cry another bit, I rode on up to the lot and turned my horse in. Tomorrow, I thought, I’ll take Arliss and that pup out for a squirrel hunt. The pup was still mighty little. But the way I figured it, if he was big enough to act like Old Yeller, he was big enough to start learning to earn his keep.’ People talk about the end of Moby Dick, but Old Yeller...

Christopher: “If I hear that guy with the Clark Kent glasses use the word ‘steliform’ again I’m going to throw an egg at him.”
Bella: “What’s wrong with steliform? Steliform’s a good word.
Christopher:“It’s totally ripped off from Infinite Jest. It’s David Foster Wallace’s word. No one should touch it.”
Bella:“Why isn’t that book in your big three?”
Christopher: “Infinite Jest isn’t a book, it’s a fucking planet.”


Miscellaneous Authors & Novels That Were Name-Checked

Bella: “I guess I’ve always held on to this very simple idea that someday I would find a partner who I could read with. Someone I could lie beside in bed on Sunday mornings, our limbs intertwined. We’re both lost in a great novel. Something by James Baldwin or Denis Johnson. Lynda Barry. We laugh secretly to ourselves. And we’re comfortable enough with our life that we allow this secrecy. Because loving a book is kind of like having an affair, after all.”

Christopher: “These days the novelist has to either be really good at Twitter or commit suicide. Sylvia Plath, John Berryman, Virginia Woolf, David Foster Wallace, Seneca, Hunter S. Thomson, Ernest Hemingway, William Inge, Anne Sexton, Hart Crane, Yukio Mishima, and John Kennedy Toole.”
Bella: “But only one of those on that list could have possibly had a Twitter account.”
Christopher: “I highly doubt David Foster Wallace was on Twitter.”

Bella: “I read to her from her favorite Anne Tyler book: The Accidental Tourist."

Christopher: “Mary Shelly completed the manuscript for Frankenstein before her twentieth birthday.”

Bella: “He met her in the library. She was reading the new Jonathan Franzen novel.”
Christopher: “I got her attention by making fun of her.”
Bella: “How so?”
Christopher: “I told her that reading Jonathan Franzen is the equivalent of eating a few servings of truck-stop-quality fruit cocktail and then going on a spirited jog down a well- appointed Upper-middle-class street with giant initials on all the garages.”


Don't miss Adam Rapp's The Sound Inside, running at Broadway's Studio 54 through January 12.