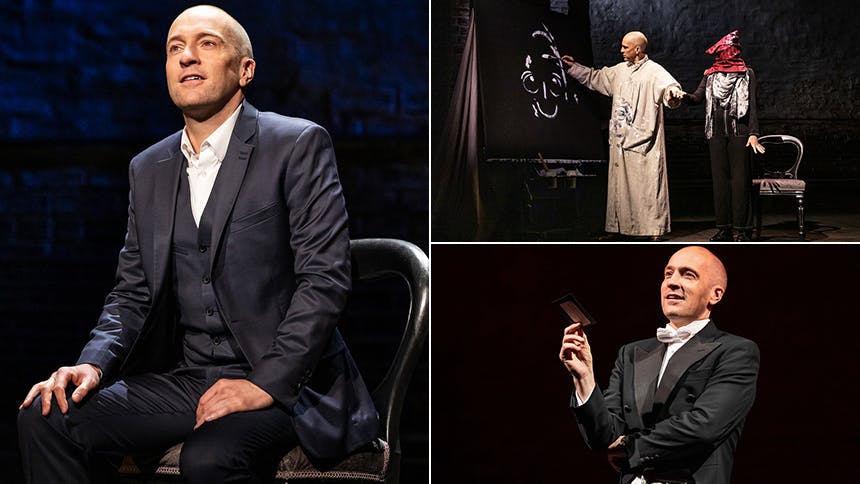 World-renowned psychological illusionist Derren Brown has all of Broadway talking about his unbelievable show, Derren Brown: Secret. Describing what he does onstage each night would spoil the wonder, but know this: I was a participant in the final act; I felt completely in control of my own decisions; and yet it all worked out exactly as Derren planned. It's a jaw-dropping night of theatre that will wow even the most jaded New Yorker.


Thanks to his live shows around the world, TV and Netflix specials, and books, Derren is one of the most famous and acclaimed mentalists working today. BroadwayBox recently caught up with Derren to discuss ambition, control, fame, and his life outside the spotlight.

1. What has surprised you most about doing a Broadway run? Was Broadway always a bucket list milestone for you?
Not especially—I’ve only ever been driven by what seems like it might be fun and interesting at the time. I’ve no interest in ambition. But it has been a wonderful surprise, perhaps because of that: I didn’t expect it to feel any different from doing the show anywhere else in the world—you have your dressing room, and then a spotlight, kind of wherever you are. But there is a level of interest here, of professionalism and positivity from the people that work behind the scenes, and a particular type of excitement in the audiences, that I don’t really recognize from home. It’s been hugely enjoyable, and now in the last stretch—I finish January 4th—I know I’ll miss it. You're seen as a star here, which isn’t the case in the West End. At home, you’re very much a person doing a job, no matter how big the show is. The theatre scene doesn’t hold the inherent excitement and sparkle it seems to do here, and it certainly doesn’t offer up the same sense of community. That’s very lovely.

2. People I’ve sent to the show have asked me and now I must ask you: Is there a backup plan for each illusion in case something goes askew or has everything added up this entire run so far?
Ha—I’m happy for things to go wrong. It’s like a juggler dropping a ball, if it doesn’t happen on its own, you do it on purpose to remind people that it’s difficult, and that they’re watching a human being…those things are important. I just try to make sure they don’t mess up at key moments. Occasionally they do—I have a certain amount of room to maneuver, or I have to just embrace the fact I’ve messed up. I guess that’s the beauty of live theatre…

3. What’s the most random or strange place a fan has stopped you? Do fans expect you to perform when they meet you or are they just happy to say hi?
People very rarely ask me to ‘do anything’. Which is a relief. Maybe they’re a bit scared. The nicest thing people say is when the work I’ve done has meant something important to them personally. I have a long TV career in the UK—the last few shows are on Netflix—and the themes they deal with have definitely meant a lot to some people and helped them. That’s a lovely thing, and makes it all worth it.

4. What would fans find most surprising about who you are offstage and your life outside of performing?
I’m an introvert; I paint; I have a lot of taxidermy; I can’t drive; I’m barista-trained. Any of the above.

5. What was the most illuminating thing you learned about yourself while writing your most recent book, Happy: Why More or Less Everything is Absolutely Fine?
Happy is book about happiness, and mainly about Stoicism, a 2,000-year-old philosophy for dealing with adversity and the challenges of life. It’s phenomenal, and so helpful in this age obsessed with goal-setting and positivity. Those might sound like good things, but despite the promises of self-help books, they can leave us feeling like failures. The Stoic approach is to only seek to control the things within your control—namely your thoughts and actions. All else—what other people do and think, for example, you cannot. And if you try to, you will probably create needless anxiety and frustration. So, by deciding things outside of your remit are truly fine as they are, you are moving in an easier accordance with fate rather than trying to control it. There was nothing complacent about it—the Stoics were big movers and shakers. But they knew the wisdom of doing their utmost (within their control) to change the world rather than fall for the folly of, say, trying to win (which is not). Distinguishing between the two—to only apply yourself to how you think and behave—actually makes for more effective action, because feelings of failure don’t get in the way. But above all it promotes a robustness and a resource of tranquility. I look in the book at what happiness has meant throughout the ages and what we can glean from a long history of a complex subject that we have all sorts of wrong ideas about.