Secrets of the Set Tony Awards 2019 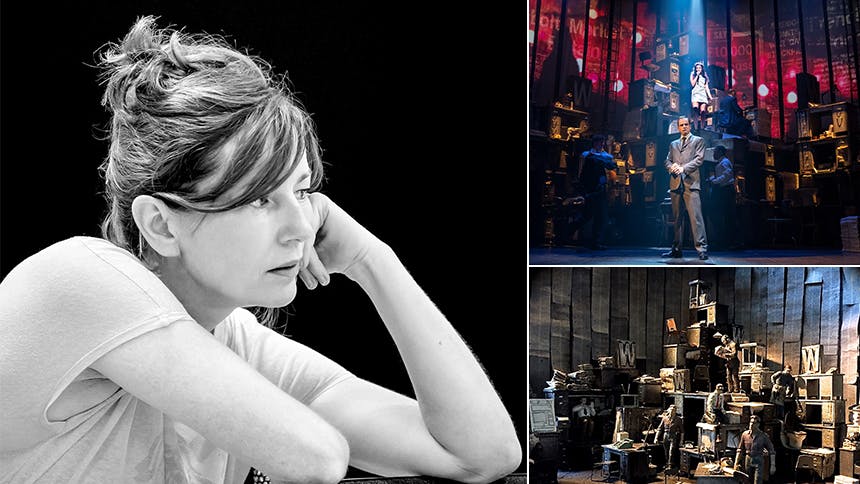 Tony and four-time Olivier Award-winning production designer Bunny Christie is a Tony Award nominee again this season for her incredible, mesmerizing work on the Broadway production of Ink

, the Tony-nominated Best Play about Rupert Murdoch and Larry Lamb’s reinvention of the tabloid The Sun in 1969 London. Bunny made her Broadway debut and won a Tony Award for the scenic design of The Curious Incident of the Dog in the Night-Time and will return to Broadway again next season with the Olivier-winning revival of Company.

Audiences at MTC’s Friedman Theatre are absolutely taken with Bunny Christie’s intricate design of office desks to create a massive structure (complete with tunnels!) that towers over the action. BroadwayBox recently caught up with Bunny to find out five secrets of her Tony-nominated Ink set.

Toilet UK vs Toilet US

Then there's the toilet on the set. It's funny because it seems like my signature thing is to have to a toilet on every set that I do. All the recent shows I've done have had toilets on them. A lot of the set came from the UK—so some of it is part of the original set—but for some reason the toilet didn't come over from the UK. So, the prop department in New York were looking for the toilet, and, of course, your sinks and your toilets are all lovely and much bigger and chunkier in the US than we have in the UK. I was photographing my toilet in my house in London, and measuring my toilet and sending them details of exactly what size and height. I was crouching in my toilet taking photographs of my toilet, and sending them over. There's also a toilet roll next to the toilet, and the toilet roll is like a little roll of newspaper.

Creating a Piece of Massive Machinery From Scratch


The desks themselves are all made from scratch. Although they look like they're original metal desks, they're actually all timber desks that were all built specifically for the show. They are all identical to each other. Then when I was building the desks, they said to me, ‘So do all the drawers work?’ Which would have added a huge cost. So, I nominated some of the drawers and some of the cupboards to work, and some are just pretend drawers.

Rupert [Goold, the director] and I talked a lot about how the set should feel like it's a piece of machinery. It's sort of oozing wet ink, and it's gritty, and it's got newsprint sort of running through it. It feels almost like a massive printing press, but we also felt the journalists were a bit like rats in the sewer, so they needed to be able to run through it and under it and on top of it, and scamper about all over it. I made lots of little routes for them to be able to use. They're all really great at being very agile on it.

Hot Off the Presses


We've got lots and lots of newspapers on the set. They're all reprinted replicas of real papers—because all the events and the characters in the play are real and really existed. There's an authenticity to the writing, so all the newspapers are reprinted of the actual newspapers from 1969. We just do loads and loads of printouts of those front pages and headlines.

Then there's the sales chart, which is a crucial prop. Originally, when James Graham wrote the play, he had a sales chart that he wrote that was almost like a kind of pin board, with pieces of string that you can move up and down. That's how he wrote it, but we thought it was not a very visually punchy thing to show to the back of the auditorium how the sales figures are changing. It's really important to let people see how they were beating the opposition, and how far down the chart The Sun was at the start of that year. Then we went through so many different versions: is it a bar chart, or is it a pie chart, or is it piles of newspapers that we see piling up? That weirdly that was one of the hardest things. I've done numerous different versions of that sales chart, and now what we've ended up with looks like a really simple graphic illustration.